'Hypocrisy Is Not A Terrible Thing... '

'...when you see what overt fascism is compared to sort of covert, you know, communal politics which the Congress has never been shy of indulging in'. Transcript of The Democracy Now! interview telecast on May 19. 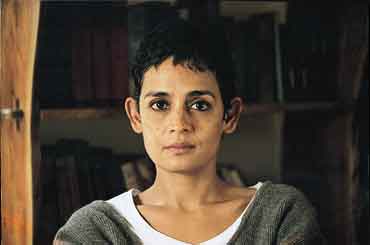 Amy Goodman: It's very good to have you with us. Can you explain what is happening right now in India? Were you surprised by the victory of the Congress party, and then the rejection by Sonia Gandhi of the prime ministership?

A lot of us, when the results came out ... thought it couldn't have been a better result. The Congress party sort of shackled to the left parties in a coalition which would make them a pretty formidable opposition to the BJP.

Arundhati Roy: I think many people were surprised by the victory of the Congress, because it was really hard to see beyond the sort of haze of hatred that the Hindu nationalists had been spreading. One wasn't sure whether the people would be blinded by that -- and they had been just a few months ago in a local assembly elections in Gujarat -- or whether the real issues of absolute poverty and absolute [separation] from the land and water resources would be the big issues.

A lot of us, when the results came out -- leaving aside one's cynicism about mainstream politics -- thought it couldn't have been a better result. The Congress party sort of shackled to the left parties in a coalition which would make them a pretty formidable opposition to the BJP. But subsequently, what has happened has been actually fascinating because you can just see the forces at play, both internationally and nationally, so blatantly, just so blatantly that, you know, just in order to understand what's going on, it's been a fascinating few days.

Amy Goodman: Can you talk about the differences between the BJP, which has been defeated, and the Congress party? I understand that you have just returned from the house of the man who we believe will replace Sonia Gandhi since she has turned down the prime ministership.

Congress has historically played covert communal politics ... Somehow the BJP is the horrible specter that has emerged from the legacy of the Congress party.

Arundhati Roy: No, no, no not returned, but I was in the market and to come back home I had to drive past all of the politicians' houses, and I could see all the crowds outside and the television cameras and so on. I have no access to them in that sense, but, well the fundamental difference between the Congress and the BJP is that one is an overtly fascist party, proudly fascist. It doesn't feel bad if you call it that. The culture to which the BJP's big leaders subscribe to, which is the RSS, openly admires Hitler.

The Congress -- I mean, obviously, the way it has happened is that the Congress has historically played covert communal politics in order to create what in India we call vote banks where you pit one community against another and so on in order to secure votes. So, somehow the BJP is the horrible specter that has emerged from the legacy of the Congress party. You know, you begin to realize that hypocrisy is not a terrible thing when you see what overt fascism is compared to sort of covert, you know, communal politics which the Congress has never been shy of indulging in.

Economically, again, it's the same thing. You know, the Congress really was the party that opened India up to the whole neo-liberal regime. But the BJP has come in and taken it much further, to absurd levels. Today, we have a situation in which 40% of rural India has food absorption levels lower than sub-Saharan Africa. You have the biggest rural income divide ever seen in history. You have millions of tons of food grain rotting in government pogroms while starvation deaths are announced all over. You have the WTO. regime making it possible for the government to import food grain and milk and sugar and all of these things while Indian farmers are committing suicide not in the hundreds now, but the figures have moved into the thousands.

And you have a middle class which is glittering, which is happy... I just wrote a piece about how corporate globalization and this kind of Hindu nationalism, communal fascism are so linked. If you see what has happened after the elections, after the people of India made it clear that their mandate was against communalism, their mandate was against economic reforms. Even in state governments where the Congress party had instituted these reforms, the Congress was also overthrown. It wasn't a vote for Sonia Gandhi or a vote for the congress, it was a vote against very serious issues.

What has happened is that as soon as the election results were announced, the BJP., the hard-right wing members of the BJP. and its goon squads started saying we'll shave our heads. We'll eat green gram and make a revolution in this country against this foreign woman on the one hand, and on the other hand, equally hard core corporate groups were acting -- they were out on the streets.

They were yelling like fundamentalists would, and all of these corporate television channels had split screens where on the one hand, you saw what is happening in Sonia Gandhi's house and on the other half, you just had what the stockbrokers are saying. And the whole of the one billion people who had voted had just been forgotten. They had been given their photo opportunity, their journeys on elephant back and camel and whatever it was to the election booth. Now they were just forgotten. The only comments you get are what the industrialists think... and what the centrists think about Sonia Gandhi. It is an absolutely absurd kind of blackmail by fascists on the one hand and corporate fascists on the other.

Amy Goodman: On the issue of Sonia Gandhi and why she is stepping down, what this means, do you think it is significant at all?

Arundhati Roy: I think there was a real dilemma there. All of us are so used to being cynical and reading meaning into meanings. But she was faced with a party and with a climate and people at the helm of the BJP, who we know now are capable of going to any extreme -- as we saw what happened in Gujarat two years ago when they openly supported a pogrom in which 2,000 Muslims were massacred on the streets, and not a single person has been brought to book or punished.

I think she was aware of the fact that this kind of vilification and this kind of chauvinism is in the air. It could have resulted in a situation where a new government comes in and all it's doing is firefighting on a non-issue, on whether Sonia Gandhi is a foreigner or whether she should be there or not there.Whereas, in fact, there are so many really pressing issues that need to be looked at. So, I think that there was a real dilemma there, and perhaps strategically it has taken the wind out of the BJP's sails and has exposed them for being absolutely uncaring for a massive mandate. If you look at all of the secular and left parties together, it's 320 seats, which is a huge majority. 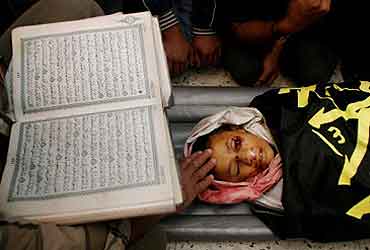 Amy Goodman: Arundhati, as you listen to this report of the Israeli helicopter gun ships firing into the crowd of thousands [in Rafah in Gaza], a number of people are dead, and it's certainly an issue you have followed as well as what you're hearing about what's happening in Iraq, could you share your response?

I think she was aware of the fact that this kind of vilification and this kind of chauvinism is in the air. It could have resulted in a situation where a new government comes in and all it's doing is firefighting on a non-issue.

Arundhati Roy: It's just that you have to sometimes you have come to a stage where you almost have to work on yourself. You know, on finding some tranquility with which to respond to these things, because I realize that the biggest risk that many of us run is beginning to get inured to the horrors. Next time around, only if it is ratcheted up, will it get our attention?

The fact is that America’s weapons systems have made it impossible for anybody to confront it militarily. So, all you have is your wits and your cunning, and your ability to fight in the way the Iraqis are fighting. You see that system. You see Iraq as the culmination of a system, and you see how hard that system is pushing even here. You can see the clear links between what's happening in the Indian elections and this whole global economy and how it's suffocating the breath out of the body of poor people.

I realize that the biggest risk that many of us run is beginning to get inured to the horrors. Next time around, only if it is ratcheted up, will it get our attention?

Amy Goodman: We have also gotten these reports of some Indian workers who were working for a western contractor in Iraq, who alleged that they were kept there against their will, hardly being paid.It was a report that was first reported in the Hindu and then followed up in this country, a group of 20 Indians who ran away from a U.S. Military camp in Iraq where they worked in the kitchen claiming they had been abused for nine months. Is this a story that you have been following? They have returned, I believe, now, to India.

Arundhati Roy: They are all people from Kerala which is where I come from, you know, and apparently, these kind of job contractors took them to Kuwait, pretending that they had got them work there. A lot of people from Kerala work in the Middle East. And then they were put on a bus basically and they realized they were in Baghdad before they knew it. So, I think, you know, this is the bottom end of the privatization of war.

Torture has been privatized now, so you have obviously the whole scandal in America about the abuse of prisoners and the fact that, army people might be made to pay a price, but who are the privatized torturers accountable too? Eventually, you have a situation also in which -- as it becomes more and more obvious to the American government that when American soldiers die on the battlefield, pressure goes up at home. so they're going to try to hire other soldiers to do their work for them.

You know, they're going to try to hire poor people from poor countries who would be willing to do it. I'm sure they're going to try that. They're trying that already, trying to get, of course, the Indian army and so on in -- we know Hamid Karzai's securities are all privatized. I think it's a nightmare and ultimately, terrorism, in way, is a privatization of war. It's the belief that it's not only states that can wage war, why not private people? Why not have your nuclear bombs in your briefcase? All of these policies that America upholds, nuclear weapons, privatization, all of these things are going to mutate and metamorphosis into these dangerous things.

Amy Goodman: I want to thank you for joining us from New Delhi, India. Arundhati Roy, the author and activist. Her book is coming out this summer "The Ordinary Person's Guy to Empire." This is Democracy Now!.

'This Government Will Last Five Years'