The Chalo Hyderabad Telangana March on September 30 saw close to a lakh of people gather on Necklace Road to press for statehood. The Telangana Joint Action Committee (TJAC) headed by Professor Kodanda Ram pulled off one of the most successful mass protests in recent times. While the presence of Congress and TDP was limited, the TRS brought its rosy hue (pink being the party's colour) to the rally. Lathicharge, tear gas and water cannons were liberally used by the police to keep the raging protesters in check who still managed to attack restaurants and media vehicles. While the TJAC is busy patting itself on the back for the grand success of the march, Kodanda Ram displayed his inexperience by first stating that the march would end by 7 pm and then trying to pull a fast one on the cops. The TJAC chairman bellowed to the crowd that they should stay put till an announcement was made on the Telangana issue by the centre. 'Occupy Hyderabad till Telangana is formed' was the march's mission, he said. At which point, the TRS MLAs walked out of the march as did a majority of the crowd. Kodanda Ram's bravado continued for a few hours more as the skies opened up and it began pouring. Soon enough, his will crumbled and Kodanda Ram announced that since the point had been conveyed to the centre through the massive turnout, the T-supporters could go home as it was raining. What began with a bang ended in a whimper. Kodanda Ram who boasts of taking the agitation route while TRS chief K Chandrasekhar Rao picks the negotiation path, is now planning an indefinite fast. KCR, who is back in Hyderabad after nearly a month in Delhi, says that his talks with the Congress will continue and assures people that Telangana would soon be a reality. And so, the T-tale continues. 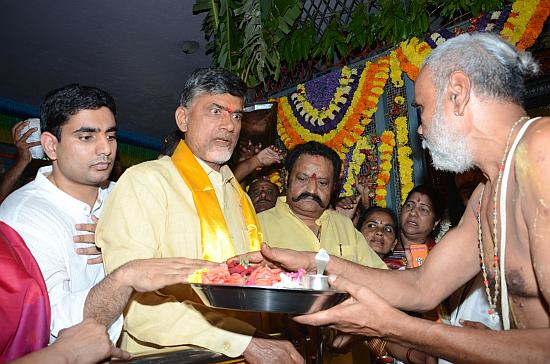 Telugu Desam president Chandrababu Naidu has kicked off his Meekosam Vastunnanu padayatra. The 117-day walkathon aims at "exposing the corruption, incompetence and inefficiency of the Congress government in the state," says Naidu. At 63, Naidu says he's fitter than ever and that his disciplined lifestyle has enabled him to take up this yatra. Apart from keeping his energy levels high with cucumber and beetroot juice, Naidu is doing some yoga before he starts walking every day. The opposition leader will be covering 13 districts in the course of his yatra. Following Naidu to some of the places was his son Nara Lokesh, who does not appear to be quite as trim as his father. Naidu is walking around 20 km a day and then calls it a day after addressing a public meeting. He is sleeping in a hi-tech, multi-facility luxury bus which has a modern kitchen and bathroom. Some TDP leaders who are following Naidu says his padayatra is like a slice of Shah Rukh Khan's Swades where the NRI hero attempts to reconnect with his motherland. Even as many political observers predict the rise of Jagan Mohan Reddy's party in 2014, the TDP hopes this padayatra might signal a change in the party's fortunes.

The International Bio-Diversity Convention being held at HICC, Hyderabad remains a muted affair and the usual topics of Bt Cotton and GM crops are being debated. While western participants highlight the importance of increased yields, lesser fertilisers and reduced carbon footprint through GM seeds, the desi NGOs are putting forth their views on relying on more sustainable, environment-friendly practices. What's a bit upsetting for Andhra Pradesh though is that hotel occupancy in the star hotels around the Hi-tech City has been dismal and AP Tourism has not been able to market the city's attractions that well to the participants. Word is that the Chalo Hyderabad March which greeted them on their arrival to Hyderabad scared them witless. Talk of Naxal and terror elements being present at the rally has led them to stay put at the HICC venue. The Golf tournament at the Golconda Golf Course over the weekend though might witness more enthusiastic participation.

Chief Minister Kiran Kumar Reddy is said to be mighty miffed with Governor E.S.L. Narasimhan's frequent trips to Nai Dilli to brief top Congress leaders about the state of affairs in Andhra Pradesh. And when Narasimhan is not in Delhi, he is said to be meeting state Congress ministers and taking down copious notes, much to the chagrin of the Chief Minister. What with warring Cabinet members, the T-issue and his own wobbly gaddi, Kiran Kumar is in no mood to deal with further trouble. So, according to media reports, when Narasimhan was at his favourite pilgrim spot of Tirupati recently and requested a special flight to Hyderabad, Kiran Kumar put his foot down. He apparently instructed the CMO to reject the request. As a result, Narasimhan had to stay for the night and flew back in the morning to the state capital.

With Supreme Court rejecting his bail petition, YSR Congress chief Jaganmohan Reddy has faced another setback. The SC bench has also instructed the CBI to complete its investigation by March, 2013 at the latest. A day before the verdict, the Enforcement Directorate attached assets worth Rs 51 crore of firms owned by the Kadapa MP and others accused in the illegal assets case. The movable and immovable assets of Hetero Drugs, Aurobindo Pharma Limited, APL Research Centre Limited, Janani Infrastructure and Jagati Publications Pvt Ltd (the last two owned by Jagan) were attached under Section 5(1) of the Prevention of Money Laundering Act. Jagan's sister Sharmila addressed the media after the ED action and stressed upon the conspiracy angle again. YSR Congress spokesperson Ambati Rambabu says that Jagan will probably file a review petition soon and asked party workers not to be disappointed. "The people's court has already given the verdict in the recent by-elections and we will fight till the final victory," he asserts.