I went looking for a bunch of typical Indian Muslims with whom I could watch Obama's historic speech. But frankly, no one seemed interested -- or bothered. Even on the campus of Jamia Millia Islamic University... 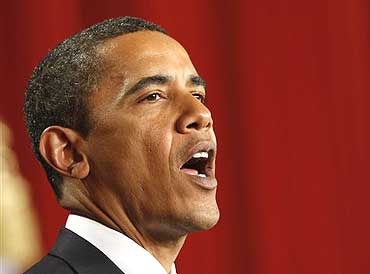 I have always been a bit sceptical about the existence of the "Arab street" that some of my colleagues keep talking about. But I can tell you for certain that the "Indian street" doesn't exist. This country is just too big, and too diverse, to sum up as having a single opinion. Yesterday, I went looking for it anyway. My task: Find a bunch of typical Indian Muslims with whom I could watch Obama's historic speech.

My translator, Salman, an Indian Muslim himself, wasn't too optimistic. "To be honest," he said, "we can find some cafe or something and round up some people, but we're not just going to find somebody who is watching it."

Because of the recent election and the furious pace with which the new government is unveiling big-ticket policies – including a speech by the Indian president to reveal Manmohan Singh's 100-day agenda today – Obama's superspeech kinda slipped under the radar. There were no big previews, just some agency copy on the international pages, buried deep in the newspaper.

We decided our best chance was on the campus of Jamia Millia Islamic University, a school that, as its name suggests, has a good number of Muslim scholars, but is also known for its cutting edge film and multimedia department. Outside the Islamic Studies department, we spoke with 25-year-old Muhammad Yafiruddin, a bearded MA student dressed in a traditional salwar kameez and wearing a skull cap.

"Are you planning to watch Obama's speech to the Muslim world?" I asked him.

"No," he said. "I'm not interested in what he has to say. He's just another oil and war hungry American. He's only doing this to keep America's interests safe. His Muslim identity is only a disguise."

"As an Indian Muslim, do you think that this speech is addressed to you?" I asked

"His speech is directed at the heads of state and bureaucrats in the audience; it's not meant for common Muslims on the street like me, nor are we interested. The only difference between Obama and Bush is that Obama has a clean past and Muslim ancestry. One I hate, and the other I'm indifferent to."

It sounds pretty bad when I write it down like that, but it wasn't the ravings of a fanatic. More like the typical political fire you'd get from a politically active college student anywhere. Muhammad was a friendly guy, and happy to talk with me. He just wasn't going to watch Obama's speech – no matter how we tempted him with getting his name on the Internet.

He did, however, know where we could find a cafe with a TV where a lot of  Muslims hang around. "La Jawab Coffee House," he said. It turned out the place was in the neighbourhood infamous for last year's so-called "Batla house encounter," in which several young Muslim men, suspected of being terrorists, were gunned down by the police. The community has called for an independent probe into the incident.

Unfortunately, though, it hasn't turned La Jawab Coffee House into a hotbed of political discourse. When my buddy Salman and I got there, a Hindi film called Gayab had just started on TV, and nobody wanted to miss it to watch Obama make history. 27-year-old Rizwan had dibs on the TV, and he refused to back down. The movie is a comedy about a nerd who turns invisible so he can get a girl, fails to make her love him, and becomes a superhero instead. So naturally I understood where they were coming from. But this was yet another time I wished I had a TV camera—even a fake one. People will do whatever you want if you tell them they're going to be on TV. They'd have switched over to Obama in an instant.

As it was, by the time Salman finished his pitch, Obama's speech was half over, and we'd come up empty.

Instead, I had to walk across the road to the Madrassa, where I met Maulana Mohinuddin Zulfi, the imam and speaker of the mosque. He was in charge of about 50 eight and nine year old kids who were apparently learning to shout at the top of their lungs, so he wasn't planning to watch Obama's speech either. But I was somewhat cheered that he planned to watch the highlights later. I'm a highlights guy, too, I thought. What is this nonsense about a clash of civilizations? So we asked him what he thought.

"Bush was a devil, but Obama is the exact opposite—as of now," he said. "Now we must wait and see what he does. George Bush's bad deeds have given a bad name to America, and that's why a lot of Muslims hate America."

"Well, I can see you're busy now, but it sounds like you're interested in hearing what Obama has to say, right?"

"I'm looking forward to it. I will read every detail of what Obama says in the newspapers. I hope he speaks well. He is a man of good intentions, and he has a good chance of succeeding in bridging the gaps caused by hatred by telling the world that America is not essentially anti-Islam."

"What about American culture? Are you afraid that your way of life is under attack by Western influences like MTV?"

"There's no fear," the imam said. "But we feel a certain disgust about these things. It would be better if MTV were closed down, but it caters to a certain audience. So we can just tell our people not to follow that culture."

Salman and I slunk out of the Madrassa with the stink of failure surrounding us. Not only had we not been able to find any Muslims glued to their televisions—well, except the guys watching Gayab (the invisible superhero). But also we had missed Obama's speech ourselves.

From the highlights, though (yep, I watched 'em), it appears that Obama may, indeed, have gone a good distance to satisfy exactly the demands of India's politically aware Muslim community. At Jamia, I'd asked Yafiruddin to tell me what he wished Obama would say in his speech—even if he wasn't going to watch it. "The first thing Obama should do is apologize for what has happened in Iraq and Afghanistan," he said. Another MA student, 25-year-old Rashid Aziz, said, "The first thing he should do is stop the settlements and the destruction of Palestine—especially the use of white phosphorus."

You guys all caught that live while I was arguing about Hindi movies. But I believe he came pretty close to doing both.