How Free Is India?

Given the inexplicable conduct of India's politicians, the public would tend to believe that most are compromised and subject to dictation by one foreign power or another. Consider l'affaire Natwar Singh ... 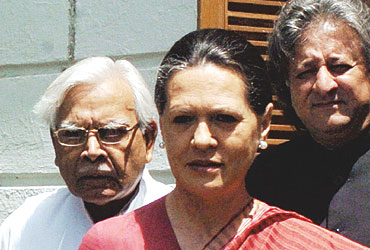 Today, independent India enters its sixtieth year. How free is it? The crisis involving Mr Natwar Singh raises disquiet. Mr Natwar Singh’s twists and turns as he defended himself invited ridicule. The role of the opposition parties was no better. The NDA had sought Mr Natwar Singh’s arrest after the Oil for Food scandal surfaced. Later it supported him to attack the government. Some intriguing aspects of this crisis merit special attention.

If this is true, whether or not she saw his three letters becomes irrelevant. The amount allegedly pocketed by Mr Andaleeb Sehgal and Mr Aditya Khanna is a small fraction of the money realized from the vouchers. Where did the rest go? If Congress was the beneficiary it would distance itself from Mr Sehgal and Mr Khanna. Mr Natwar Singh’s letters left a trail. Was that what angered the Congress?

The key question is whether or not Mrs Sonia Gandhi knew of the oil vouchers enterprise. Until all the money earned from the oil vouchers is traced a final conclusion would be hasty. Even though the Pathak Report exonerated Mr Natwar Singh from taking money he could not spill the beans. The Enforcement Directorate (ED) leaked to media information about the money trail leading to Mr Natwar Singh’s son, Jagat. The government therefore can arrest Mr Jagat Singh at will. Was that why Mr Natwar Singh first rubbished the PM and later apologized?

The conduct of the opposition parties was odd on two counts. Earlier they described the PM as Mrs Sonia Gandhi’s pawn. Yet, along with Mr Natwar Singh, their attack targeted Dr Manmohan Singh instead of Mrs Sonia Gandhi. Why? The PM is associated most with the Indo-US nuclear deal. Is that why he was targeted? The second odd aspect was that three former foreign ministers – Mr Natwar Singh, Mr Yashwant Sinha and Mr Jaswant Singh – targeted the Indo-US nuclear deal with uncharacteristic vehemence. All three, while in office, pursued a nuclear policy that led up to the nuclear deal. The deviation from past nuclear policy pointed out by them amounts to nitpicking. It does not explain their somersaults.

The question arises: Does their conduct reflect political opportunism or something more sinister? Could they be vulnerable to external pressure? Targeting Dr Manmohan Singh meant targeting the Indo-US nuclear deal. One example should suffice to indicate possibility of political vulnerability at the highest level. While media reports succeeded in exposing major scandals, a far more damaging allegation continues to be ignored. It is contained in the published writings of Dr Yevgenia Albats.

Dr Albats is a Soviet journalist who officially investigated the KGB when the communist regime was still in control. She was appointed as a member of the official KGB Commission set up by President Yeltsin in 1991. She had full access to secret files of the KGB. She authored a book, The State within a State: KGB and Its Hold on Russia. In 1989, she had received the Golden Pen Award, the highest journalism honor in the then-Soviet Union. She was a fellow of the Nieman Foundation for Journalism at Harvard University in 1993 and earned a graduate degree and doctorate from Harvard.

After translating official KGB documents, Dr Albats disclosed in her book that KGB chief Victor Chebrikov in December 1985 had sought in writing from the Central Committee of the Communist Party of the Soviet Union (CPSU), "authorisation to make payments in US dollars to the family members of Mr Rajiv Gandhi, namely Sonia Gandhi, Rahul Gandhi and Ms Paola Maino, mother of Sonia Gandhi." CPSU payments were authorised by a resolution, CPSU/CC/No 11228/3 dated 20/12/1985; and endorsed by the USSR Council of Ministers in Directive No 2633/Rs dated 20/12/1985. These payments had been coming since 1971, as payments received by Sonia Gandhi's family and "have been audited in CPSU/CC resolution No 11187/22 OP dated 10/12/1984."

In 1992, the media confronted the Russian government with the Albats disclosure. The Russian government confirmed the veracity of the disclosure and defended it as necessary for "Soviet ideological interest". The Hindu of July 4, 1992 carried this report. Mr AG Noorani included this information in an article published in The Statesman of January 31, 1998. In December 2001, Dr Subrmaniam Swamy filed a Writ Petition in the Delhi High Court with relevant KGB photocopies and sought a CBI investigation. In May 2002 the Court ordered CBI to ascertain from Russia the truth of these charges. The CBI stalled for two years and eventually told the Court that without a registered FIR the Russians would not entertain any such query. But why was not an FIR registered? Dr Swamy’s failure to follow this up more vigorously is puzzling.

In November 1991 the respected Swiss magazine, Schweitzer Illustrate, published a report alleging that Rajiv Gandhi had 2.5 billion Swiss francs, equivalent roughly to two billion US dollars, in numbered Swiss bank accounts. The Internet is swamped with allegations against Mrs Sonia Gandhi detailing cities, foreign banks, account numbers and even names of persons allegedly handling her accounts. Such allegations would easily have been dismissible as scurrilous had there not been the Albats disclosure. Surely Mrs Sonia Gandhi owes herself and the nation an emphatic and effective rebuttal of the Albats charges? On June 14, 2005 Mrs Sonia Gandhi visited Russia on a personal invitation by President Putin. There was no need for any minister to accompany her. Yet Mrs Gandhi sought and got foreign minister Natwar Singh to accompany her. One wonders if Mr Natwar Singh can shed any light on that visit.

Given the inexplicable conduct of India’s politicians, the public would tend to believe that most are compromised and subject to dictation by one foreign power or another. In the light of this, on this Independence Day, thinking Indians should soberly ask themselves a simple question: Can the people of India be free if their rulers are not?