Hope Urjit Patel, His Team Have A Spine: Rahul Gandhi On RBI Meet

The RBI's crucial board meeting on Monday is expected to take up the liquidity crisis that has triggered a tiff between the government and the central bank. 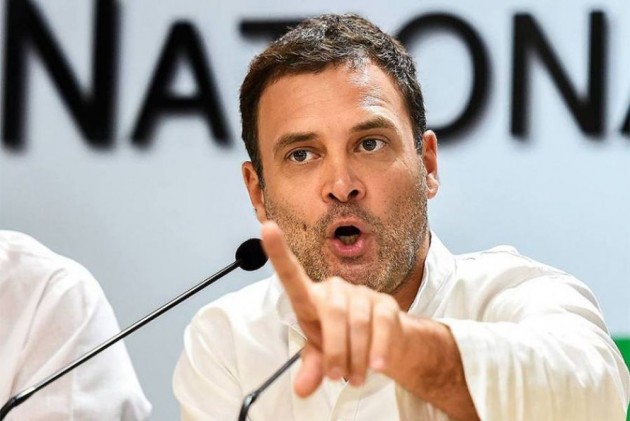 Ahead of the crucial RBI Board meeting, Congress President Rahul Gandhi Monday accused Prime Minister Narendra Modi of destroying institutions and hoped Reserve Bank Governor Urjit Patel has a "spine" and will show the prime minister "his place".

Taking to Twitter, Gandhi accused Modi and his "coterie of cronies" of “destroying” institutions.

“Mr Modi and his coterie of cronies, continue to destroy every institution they can get their hands on. Today, through his puppets at the RBI Board Meet he will attempt to destroy the RBI. I hope Mr Patel and his team have a spine and show him his place,” he tweeted.

Mr Modi and his coterie of cronies, continue to destroy every institution they can get their hands on. Today, through his puppets at the #RBIBoardMeet he will attempt to destroy the RBI. I hope Mr Patel and his team have a spine and show him his place.

Amidst Rift With Centre, Crucial RBI Board Meeting Begins

The Congress has accused the Modi government of destroying every institution in the country and the latest one being the Reserve Bank of India.

The RBI's crucial board meeting on Monday is expected to take up the liquidity crisis that has triggered a tiff between the government and the central bank.

The meeting is being held in the background of tension between the Centre and the RBI after Finance Ministry cited the never-used-before Section 7 of the RBI Act which empowers the government to issue directions to the RBI Governor.

The government on November 9 had said it was discussing an "appropriate" size of capital reserves that the central bank must maintain but denied seeking a massive capital transfer from the RBI.

Economic Affairs Secretary Subhash Chandra Garg had also clarified that the government wasn't in any dire needs of funds and that there was no proposal to ask the RBI to transfer Rs 3.6 lakh crore.

RBI Deputy Governor Viral Acharya had in a speech last month talked about the independence of the central bank, arguing that any compromise could be "potentially catastrophic" for the economy.

Addressing the annual Economic Times awards function on Saturday, Finance Minister Arun Jaitley said that growth must not be throttled by limiting credit availability and liquidity.

It is necessary that the growth process does not suffer due to the cleaning up of the banking system from the "collectively committed sins", he said, referring to the non-performing assets (NPAs), or bad loans, accumulated in the banking system and which have touched a staggering Rs 10 lakh crore.

"This will have to be done in a manner in which you restore the health of the banks, you restore the discipline as far as the banking system is concerned and at the same time, we don't end up throttling growth by throttling credit and liquidity in the market. That is a key issue," Jaitley said.

The RBI's central board currently has 18 members, including Governor Urjit Patel and his four deputies as full-time official directors, while the rest have been nominated by the government, including the Economic Affairs and Financial Services Secretaries.

The RBI said earlier this week that it would inject Rs 12,000 crore into the market by purchasing government securities on November 15.

"Based on an assessment of prevailing liquidity conditions and also of the durable liquidity needs going forward, the Reserve Bank has decided to conduct purchase of Government securities under Open Market Operations for an aggregate amount of Rs 120 billion on November 15, 2018, through multi-security auction using the multiple price method," an RBI statement had said.