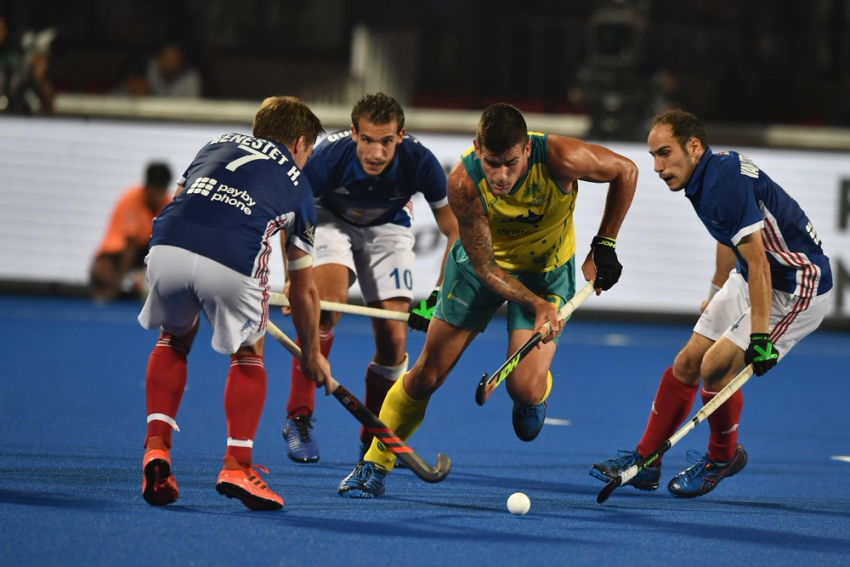 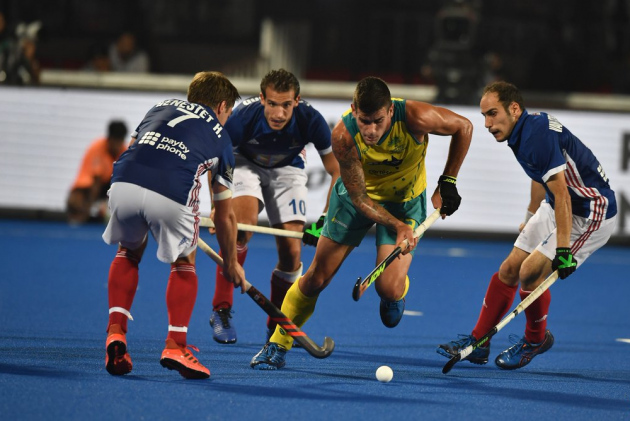 Chasing an unprecedented hat-trick of titles, holders Australia beat surprised quarter-finalist France 3-0 in the second match of the day at the Kalinga Stadium. World number one Australia scored all their goals from penalty corners through Jeremy Hayward (4th minute), Blake Govers (19th) and skipper Aran Zalewski (37th) in the second match.

However, the final scoreline was far from convincing from Australia's point of view, especially against the lowest-ranked in the tournament. France, ranked 20th, played good hockey in bits and pieces but were undone by the Kookaburras' vast experience and skills.

Despite the loss, the Frenchmen would return home with pride, especially with their superb show in the tournament that includes a shocking win over Argentina in the pool stages.

Four minutes into the match, Australia earned their first penalty corner when the ball found Francois Goyet's foot and Hayward made no mistake in converting the opportunity to hand his side the early lead.

Australia continued to dominate the proceedings with repeated forays as the French defence found itself in shambles to keep the Kookaburras at bay.

Soon after the start of the second quarter, Jake Whetton earned Australia its second penalty corner and Govers fully obliged by smashing his flick into the back of France's net to take a 2-0 lead.

Just at the stroke of half-time, France earned their first penalty corner which they wasted as Australia went into the halfway break with a comfortable 2-0 lead.

Seven minutes into the third quarter, Australia tripled their lead when Zalewski converted Kookaburras' third penalty corner with a variation.

The Australians kept up the pressure on the France defence and secured another penalty corner in the 41st minute but this time they failed to make use of the chance.

The final quarter witnessed a neck-and-neck fight between the two teams as France tried hard to forge a comeback into the match but the Australians defended in numbers to deny any inroads.

The Kookaburras too tried to extend their lead over their less-fancied opponents but failed to create any real scoring opportunities.

Australia eventually defended their 3-0 lead and now wait for a mouth-watering semi-final clash against either India or Netherlands.

Earlier, England staged a superb come back to make their third successive semi-final appearance in the history of the tournament. In a thrilling quarter-final match which witnessed three goals in four minutes in the last quarter, England beat Argentina 3-2.

England conceded the lead early in the second quarter after Gonzalo Peillat scored first of his two goals in the 17th minute. But they equalised through a Barry Middleton (27th minute), then took a 2-1 lead four minutes later with another field goal, this time from Will Calnan (45th).

Argentina, the bronze medallist in 2014, had themselves to blame for the defeat as they missed chances galore and got into panic mode after conceding the third goal.

Realising that slow pace is not helping them, England raised their tempo and that paid dividends as they earned their first penalty corner in the 11th minute.

Luke Taylor's effort from the resultant set-piece earned them another penalty corner immediately but Argentina defended stoutly to keep their rivals at bay.

Argentina secured its first penalty corner in the 17th minute and drag-flick expert Peillat scored with a powerful flick to take the lead.

While Argentina players were celebrating, England almost equalised with a brisk counter-attack only for David Condon to miss a sitter.

Thereafter, the Los Leones surprisingly adopted a defensive approach and that worked in England's favour.

Mark Gleghorne's fine run down from the right flank and his subsequent cross was cleared by England defenders which laid in front of an unmarked Middleton, who slotted home with a powerful shot past goalkeeper Juan Vivaldi to level the scores.

Buoyed by the equaliser, England went on the offensive but failed to get past Argentina's crowded defence.

Argentina, on the other hand, adopted a wait and watch policy to launch counter-attacks.

But it was not to be as England striker Zachary Wallace made an impressive run into the Argentine circle and was brought down inside, which earned the Los Leones back-to-back penalty corners but they wasted both.

In the last quarter, Argentina equalised through Peillat's penalty corner conversion before Martin struck a minute later with a field strike to hand England the unexpected winner.

England will take on the winner of the match between Germany and Belgium in the semi-finals on Saturday.

On Thursday, two-time champions Germany face Belgium in an all-European quarter-final in the day's early kick-off, while hosts India take on three-time champions the Netherlands in the last last-eighth match.