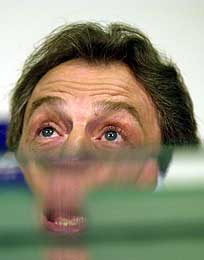 Prime Minister Tony Blair led the  ruling Labour Party, to a landslide victory for a historic second term in office. Labour has captured 413 of the 642 seats declared so far for the 659-member House of Commons. The Conservatives have managed to win 166 seats, while the Liberal Democrats won 52.

Turnout is down to about 60 per cent which is the lowest in recent years -- but it is a moment of glory for the architect of the New Labour, Tony Blair, who stays PM despite heavy voter apathy.

"For the first time in our 100-year history, we are on the verge of a second successive term of office. That is an extraordinary thing - it's what we have always worked for. We can indeed take pride in what we have done during the past four years, though we have absolute humility for what we have to do. Five years from now it will be a better country than today," Mr Blair said.

"It is indeed a night of history for our party but the one thing that we have to remember is that now is the time the people of this country want us to serve them, want us to do the things that we promised that we will do and they want us to be very clear about our mandate here."

The Brits seems to have approved of  Blair's promises including the one for holding a referendum on adopting the single European currency or the Euro -- a key issue during the elections. The Conservatives had opposed the Euro, and the choice seems to be clear now.

The Labour is down 6 seats from its tally in the 1997 general election, but it is no cause for cheers for Conservatives as those were picked up by the Liberal Democrats.

William Hague leader of the Conservative Party has resigned taking moral responsibility for the party's poor electoral showing with cautionary words for Blair: "The voters have given them the benefit of the doubt but the government should understand that a second a successive failure to deliver would breed deep disillusionment and cynicism not only about the government but about politics in general." This had been the elections with the lowest voter turnout, around 55%, since since 1918. In recent years the turnout figures had been over 70 per cent.

Blair himself was returned from the Sedgefield constituency with a majority of 17,713 votes, while Conservative leader Hague was elected in his own constituency in Richmond, Yorkshire

Michael Portillo of the Conservative Party retained his Kensington and Chelsea seat.

Charles Kennedy, leader of the Liberal Democrats who was re-elected from the Dingwall constituency for a record fifth time, said his party has emerged as "the party of the future". Controversial Labour MP Keith Vaz won Leicester East seat with a reduced majority.

Former Cabinet Minister Peter Mandelsson, who quit from the Blair Cabinet on the Hinduja passport brouhaha managed to win his Hartlepool seat.

Solidarity With An Ex-Colleague