Election time is temple time. And with the war clouds dissipating, it is time for fractious and belligerent posturing -- even "teaching Advani a lesson". 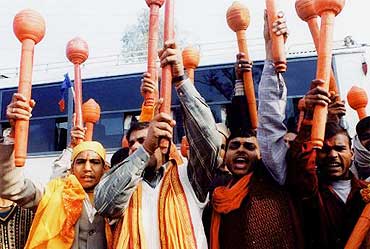 If state elections in Uttar Pradesh are around the corner, could the Ayodhya movement be far behind? Amidst battle lines being drawn up for the February 2002 elections where the ruling BJP is facing a tough battle at hands, mainly from the Samajvadi Party (SP), the Vishwa Hindu Parishad's (VHP) latest move in the five-decade-old dispute is starting  a sant chetavani yatra, a procession of holy and rather billigerent saffron-clad saints who want to build the Ram Mandir in Ayodhya, where the disputed Babri Masjid was razed to the ground in December, 1992.

That the march does not ignore election realities was made clear by its leader, VHP leader Ashok Singhal, who said that the yatra to "build the temple" had been organised to ensure that "Hindu unity remains intact" and prevents "our fragmentation into castes and sects every time elections are held". Not surprisingly, the march which set off from Ayodhya to Delhi reached the assembly constituency of Haidergarh from where state chief minister and BJP strongman Rajnath Singh is contesting elections and was filing nominations.

(The irony is complete when you contrast this with the pains VHP's International General Secretary Tagodia took to distance this yatra from the elections: "We will leave UP before withdrawal of nominations and return only on February 24 after the elections, for the Purnahuti")

Singh, under pressure from the VHP, said that the security setup in Ayodhya would be recast so that the ardent believers could get a chance to "pay obeisance to Ram Lalla without any hindrance". That was done promptly. The UP home secretary, Naresh Dayal, rushed to Ayodhya and agreed to relax restrictions on entry of heavy vehicles on the national highway passing through Ayodhya. Dayal also said that other demands like relaxing curbs on the entry of cars and small vehicles from the national highway to Hanuman Garhi temple, Kanak Bhavan and the makeshift temple in the acquired land would be considered.

The procession, which is expected to reach Parliament on January 26, has given a handle to those involved in political muscle flexing. For instance when the procession reached Lucknow on the evening of January 21, VHP leader Praveenbhai Togadia declared that the temple would be reconstructed at any date around March 12. "We cannot wait beyond a point. Now it will be a fight to the finish."  Nearly 200 prominent sadhus including Shankaracharya Vasudeon, Swamy Chinmayananda, Ramvilas Vedanti, Bhaskar Giri Swamy Devyanand and Jagannath Maharaj from Nepal are participating in the rally. Sadhus participating in the `yatra' have said that the march was not only for the construction of the Ram temple but also to mobilise Hindu masses against Islamic terrorism.

The BJP has been quick to disassociate itself from the yatra, which is being billed as the "final assault" in its campaign for the construction of a Ram temple. While BJP MPs are free to join the "yatra'' and no disciplinary action would be taken against them, the party is in no way involved with the march. Or so it would like to have it believed. "The Ram mandir issue is one of national identity and is a cultural issue, it was been a big issue for us but never a political one,'' BJP general secretary Maya Singh told journalists. Two party MPs, Chinmayanand and Vinay Katiyar are accompanying the yatra. While the party's state election manifesto is yet to be finalised, it is not certain whether the Ram temple issue will figure or in it or not. It would appear that the central leadership is not in favour of including it and there has been more than a hint to that effect by Prime Minister Vajpayee himself.

But one of the main personas of VHP's `sant' politics, Mahant Ram Chandra Paramhans of the Ramjanma Bhoomi Trust, who had so far stayed away from the yatra, and has apparently announced his intentions of opposing the BJP in the state assembly elections. Top VHP leaders are said to be persuading the saint to join proceedings and one of them expressed the hope that the revered swamy would join in soon.

As I write this, comes the "clarification" from Paramhans, who finally joined the yatra at Kanpur today, saying he "remained in Ayodhya to teach Union Home Minister Lal Kishan Advani a lesson for implementing many unwanted security restrictions causing inconvenience to visiting devotees at Ayodhya".

Earlier addressing the Yatra at Phoolbagh here, Paramhans made it clear that the construction of the Ram Temple at Ayodhya would start by March 12 irrespective of any hurdle. Could he give a fixed date? "I had not even given a date for demolition of Babri Masjid," he said. Could the date be deferred from March 12 as was done earlier? "Earlier the construction material was not ready, now I don't see any reason for deferring the construction". So that's that.

"I will not care for any government action or wait for court judgement, but will act according to what was decided by the 'Dharam Charyas' for the construction of Rama Temple, which will start by all means and no one can stop it," Paramhans has  said. He is now supposed to meet the prime minister on Jan 27 to remind him of his promise that all hurdles in the way of construction would be removed by March 12.

"I am not begging the Prime Minister to construct the Temple," he said. "They are asking us to wait for the court's decision, Why should we go to court or wait for its decision. The day Hindus take a decision, the temple will be constructed. There is no dispute on 46 acres of land at Ayodhya. The dispute is only of the "janam sathl. Let the government allow us to start construction on undisputed land and the issue about the 'Ram Janam Sathal' will be taken later."

Meanwhile the opposition parties have come down heavily upon the yatra. Congress leader Jaipal Reddy attacked the BJP for reviving the Ayodhya issue on the eve of UP assembly elections, "We are once again witnessing the pathetic and shameful spectacle of the Sangh Parivar reviving the temple issue. Whenever there is election time, it is temple time for the Sangh parivar,'' Reddy told reporters. Samajvadi Party has asked for a ban on the yatra.

BJP MP Katiyar, predictably, has said that those who accuse the party of politicising the issue, do not understand the emotional attachment that people have to the temple movement. You could call it speaking in tongues or the divide in the BJP on the temple issue, but the real politik of managing the coalition alliance on the one hand and the hardliners, out to "teach the home minister a lesson" on the other, would be under a strenuous test in the coming days.

For the time being, party spokesperson Maya Singh has come up with the old party line that "the BJP has always taken the stand that the Ayodhya issue be resolved either by a court verdict or by consensus among all the parties to the dispute. But, we cannot bar our party workers from joining the VHP yatra from Ayodhya provided they maintained decorum and did not cross the limits". She also added that the party has requested Swami Parmahans who is leading the yatra to ensure that the participants remain within limits and that it goes off peacefully". We do not know whether swamiji has any more lessons to teach Advaniji.

What is interesting is the remark from VHP's International General Secretary Tagodia that it  would suspend its agitation only in the event of a war and consequent postponement of the election to the four state assemblies.