When your people were attacked, George, you came on TV and told them to "...go out and shop!" Now you're attacking my people and I'm telling them to shop elsewhere. 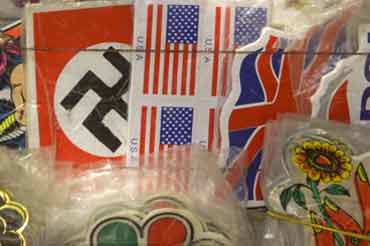 You've got the war you wanted. Enough and more will be written by people (your media whores, mostly) about this war. Your network pimps will show us the carefully-chosen, fit-to-print, inevitable celebrations amongst natives recently liberated. We'll hear about how it was a short, sharp victory. About how you brought democracy and freedom to them dang Arabs. It'll all be rosy, bloodless, incisive, welcome.

Well, wake up and smell the napalm. Because here's another war, the one your criminal buddies never warned you about. That war starts at this American-made computer.

That's right, we don't have your million-dollar missiles, your billion-dollar bombers or your trillion-dollar war budgets. The weapons we have are the ones America sold us (sounds a lot like Iraq. I know). Remember fax machines? We have them, lots of them. We got laser printers too. And DTP software. And cellphones. And SMS. And the Internet. A whole lot of Internet. These are our weapons now, the weapons of mass instruction, and you're staring at the first salvo in this war.

Oh yes, we know a thing or two about diplomacy as well. We didn't just declare war without first exhausting every other available option. We did our protest marches, see?

Not just me and a couple of my godless pinko anti-American liberal-left types, but millions of us, for months on end. In the piazzas of Rome, in the streets of Sydney and London and Madrid and Amman and Tokyo and Moscow and Beijing and Toronto and Dublin and Ankara. Even in New York. Even Tel Aviv. Millions of us. Farmers, students, executives, war veterans, housewives, school children, pensioners. These weren't orchestrated parades goose-stepping to Wagner, these were carnivals affirming our faith. We were angry, we were happy, we were sad. Some of us were guilty (we'd voted for you). We were marching. Ten million people marching. I counted.

That was diplomacy. But that was then, and this is now. The time for negotiation is over.

When your people were attacked, George, you came on TV and told them to fight the pain with dollar bills, go buy things, go support the economy. You said "...go out and shop!"

Now you're attacking my people and I'm telling them to shop elsewhere.

How does that sound, George? The very people who bankrolled your kleptocracy, brought down to their knees? The same crooked corporations and corrupt CEOs that bought you your throne, writhing in agony? The same military-industrial complex that fellated you, now doubled over, turkeying? The oil magnates, construction tycoons and arms contractors who signed your blank cheque -- your axis of good -- clawing at the bathroom walls? The same right-wing anti-abortion pro-Israel gay-bashing bible-thumping gun-toting neocons that appointed you Commander-in-Thief, ruing the day they were born? How does that sound?

Who'll look after you when your buddies are all crippled and filing for bankruptcy? Not my buddies, not us.

Because we'll be busy shopping. Elsewhere.

We'll be wearing cheap, locally-made sneakers. Not the celebrity-jock-endorsed slave labour Saipan sweatshop sneakers, but sneakers still. We'll be ripping stuff off Kazaa and LimeWire and burning our MP3 discs at 16X speed, not buying the stuff off Tower Records. We'll be buying one-dollar DVDs from Taiwanese pirates, not teeming the theatres. We'll be eating and drinking and having a hell of a time, but not at McDonald's, Hard Rock Cafe or TGIF. We'll be spending alright, mark my words, just not on your buddies.

Oh I know, I know, the grubby hands of globalisation reach far and wide, but we'll hack them off whenever we can. I've been guzzling Miller Lite all these years, George, but as I bang this into my American computer sitting in my American workplace, I'm drinking Tsing Tao (the packaging's kind of Communist-era tacky and unsophisticated, but in a blind taste test it's all the same... just ask Ray Charles).

Been online lately? Y'know, the whole Internet, UseNet, e-zine, wired community, world-wide-web thing that Al Gore kept going on about? Ask one of your more literate cronies to take you there. You'll find our declaration of war at adbusters.org and boycottwar.net and motherearth.org/USboycott.

Read the bit that says "...we hit the superpower with a boycott the whole world can see, and that American power can really feel."

Read the bit that says "...we can build the boycott into an international outcry on par with the peace marches. The intensity will build with every week of the war."

Read the bit that says "...we face a historic turning point -- and a need for new mass actions. Don't doubt that we can turn the tide; the peace movement is already 10 million strong and growing. That's enough consumer clout to make the Brand America Boycott a challenge heard round the world."

Read it? Good. You might have gathered that we don't like you. We don't like what you're doing. And we're going to take it out on your economy.

An economy so imbalanced, it seems it had its eustachian canals surgically removed at birth. All your fat hypercapitalist freemarket bastard institutions can't touch us now. Not GATT, not NAFTA, not the IMF, not the WTO, and sure as hell not the World Bank.

To use an Americanism, that's... like... so last week. I got news for you George: we're going to chew them up and spit them out. Fuck Coke. Fuck Levi's. Fuck IBM. We're shopping elsewhere.

Face it George, you're nothing but a reverse Robin Hood. You steal from the poor and give to the rich. Yesterday you were a peace-time cheat. Today you're a war criminal.

My friends, my tens of millions of friends, have spent this day despairing, aghast at how you could ignore us, ignore commonsense, ignore protocol, ignore international law, ignore the wisdom of Tutu and Mandela and Dalai Lama and the Pope, ignore even Jesus -- the man you claim to represent.

For a while it seemed we're armed with nothing but the tissues we use to dry our tears. We were wrong. We have our boycott. You can have the tissues. They're yours now, you need them more, you need them to wipe that blood off your hands.

It's time to sign off now, George, and I can't promise to see you again because we're all going to heaven. And, as of this morning, you're not going where we're going.

PS: oh sorry, Tony, Jose and John... didn't mean to neglect you fellas. Take our word for it, we haven't overlooked your wet-nosed pomeranian puppy pantleg infatuation with Master George. Matter of fact, we'll be looking out for Britain, Spain and Australia on the labels the next time we're down at the supermarket, tens of millions of us. Don't forget us, because we won't forget you.

After dropping out of Delhi University in 1992, Gene has worked with some of the world's most unscrupulous, dishonest and successful advertising agencies. By way of atonement, he runs The Daily Dissidence, Singapore's only news source that doesn't seek the approval of mainstream media. At the rate of one new subscriber every other day, it has quickly become the most circulated, criticised and controversial mailing list in that part of the world. If this goes on for long, you can eventually reach him at Changi Prison.