Hasan Suroor And The Question Of Culpability

In spite of not feeling a whit of sympathy towards child abuse and rape, I felt deeply uncomfortable about the way he was being treated. 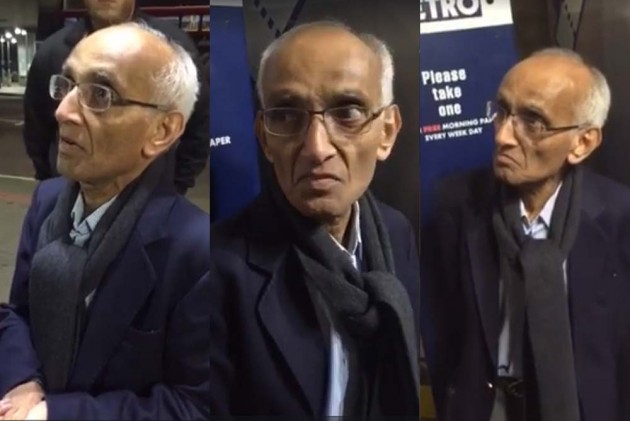 Yesterday I watched the video of London-based journalist Hasan Suroor (who has contributed to Outlook) getting accosted by Unknown, a self-styled 'anti-paedophilia' group based in London.

It quickly becomes clear, by Suroor's own vacillations and hesitant silences that he was waiting there to meet someone who had approached him on Facebook as a fourteen-year-old girl. They had exchanged sexually suggestive (if not explicit) messages culminating in him choosing to meet her for 'coffee' (his version) which is quickly corrected by Unknown to be wine. As the video progresses, these men ask Suroor if he has asked her to buy condoms, and he cannot refute it. His only refrain is 'I left it up to her' followed by 'I am innocent…can I just go with a warning?'

When I started watching the video, I anticipated feeling outrage. A 14-year old cannot legally give sexual consent. So, quite obviously, the prospect of having sex amounts to intent to rape, which, again, the main Unknown activist was making amply clear. From Suroor's own admissions and single-sentence defense in the video, it becomes hard to doubt his culpability. It was baffling then, that in spite of not feeling a whit of sympathy towards child abuse and rape, I felt deeply uncomfortable about the way he was being treated.

If you watch the video, you will see a few men — none of them in police uniform and one of them not even on camera — surrounding Suroor and heckling him for a long time. While confronting someone famous about such charges is never a polite process (nor should be), the nature of this heckling is highly problematic. While what was prevented was the possibility of child abuse, the group constantly kept calling him not a potential child abuser but a 'paedophile'.

And yet, paedophilia is a condition of being. It is arguable the extent to which it is a choice. Child abuse and the decision to commit it, on the other hand, is very much a choice. And it is a choice that even comes from motives other than a recurrent sexual desire towards children (hate crimes, revenge and racist violence have all incorporated it as a mode). The charge against Suroor is attempted child abuse. Not paedophilia.

But it is a polarising topic and misunderstandings, as well as a lack of critical thought drives most arguments that vilify suspected paedophiles as necessarily also child abusers.

There are currently two completely different ways of viewing the matter — as a mental illness; or as a dangerous moral failure as popular opinion makes it out to be. So we have a choice to make: we can either differentiate paedophilia from child abuse, or see the two as opposite ends of the same spectrum: the latter being the logical conclusion of the former.

Hasan Suroor, from what I have been able to glean so far, was not caught in the act of having sex with a child. He was not caught watching child-porn. He was instead approached by a provocateur pretending to be a child, and then tested: a test during which he admitted to being open to the possibility of having sex with a minor and from what the video shows at least, played a large part in arranging for it to happen.

Now, setting aside the immediate and perhaps understandable feelings of outrage, disgust and moral horror for a moment, let's consider what this could mean: either this person has lived with a strong sexual desire towards children for a very long time, a desire that he claims he has never acted upon till now. If we take his words at face value, there seems to be something very cruel about baiting someone with a repressed but recurring fantasy that is impossible to obliterate, just as it is impossible to fulfil. Surely, as a society, the least we can do is to provide a framework that allows such a person to reach for help and manage their impulse rather than live in shame and then be baited to give in to it?

Now, the second possibility: what if he is lying; if he is simply a repeat offender who has been finally caught? As one of the Unknown activists says, as a parent, he cannot forgive such a person. As a feminist, I cannot either. It is horrifying to subject anyone to a sexual act incapable of giving consent to sex. But how does surrounding such people, towering over them, heckling and publicly shaming them and then threatening them with dying in prison on camera a just response? It is a satisfying response, no doubt. But how does it help that person, the victim or the society at large? And how is it any different, in principle, from asking rapists to be castrated and hanged? Why is it that our sole response to violence is a fantasy of further violence?

In the US, sex offenders have been known to volunteer for chemical castration — a reversible process — enabled by the drug cyproterone acetate which suppresses libido for as long as it is taken. That, combined with intensive therapy and supervision, seems to be a far more effective way of reducing risks associated with paedophilia. Because if we accept paedophilia to be a mental illness that cannot be helped — and unfortunately that is the most progressive position on it — and if we distinguish it as a desire that is separate from the choice to harm a child, why should we engage in a modus operandi that actively makes them act out their desire in the name of prevention?

Often the argument that comes up is that a reasonable person cannot empathise with a paedophile. And it gives the creeps to think of them being part of everyday life. Thus, disgust and the wish they be caught out and put into jail. There are multiple problems with this response. Let's start with disgust. The philosopher Martha Nussbaum in her 2004 book Hiding From Humanity: Shame, Disgust and Law makes the point that if disgust, distaste and the inability to identify with, is made the basis of laws and penalties, it can easily lead to defensibility for homophobic crimes.

After all, if I as a 'reasonable' person am disgusted or alienated by the idea of homosexuality, does it mean that I can pass a law that segregates and shames a gay person? It has certainly happened. It is still happening, and it is completely wrong. So why is it that we can mete out stigma, abuse and even death threats against another form of desire that is even more complex and inadequately researched than others?

In fact, to follow the argument through, what is the basis of calling a desire an illness? An action has consequences for others and can therefore be moral or immoral. But surely, desire itself, as a psychological phenomenon, cannot be correct or incorrect. Pathologising it just for the sake of having clear boundaries of what is normal and not seems terrifying. As Foucault elegantly puts it, we are basically saying : "Tell me what your desire is and I will tell you who you are, whether you are normal or not, and then I can qualify or disqualify your desire." If we can now oppose the pathologisation of homosexuality, what is stopping us seeing paedophilia as simply as orientation that cannot be sustained because of the impossibility of consent?

And this is where my problem with prisons comes in. The prison system in most countries (with the notable exception of Denmark, Netherlands and a few others) is a breeding ground of brutalisation, desensitisation to human rights and increased chances of recidivism. The UK, where Suroor was arrested, is doing slightly better than the US (where prisoners can acquire debt for their own prison duration and sexual abuse is rampant) and as Unknown pointed out, he will very likely pass away before his time is served if he is convicted.

However, for a second, if you please, imagine someone who is 30 and getting a decade or even a couple of decades in prison, and going through a system that quarantines him in an environment whose sole purpose is to hide away human beings as if they are social garbage and profit off their labour. Prisons are driven by the principle of state-mediated retribution, and retribution, as we have seen again and again, is not the way out — especially not for survivors and potential victims.

Prisons can work, of course. They can work if they are actually rehabilitative facilities where people can undergo the counselling, help and supervision needed for free in order to manage and suppress criminal behaviour; if they are places where the media can walk in anytime and inspect the conditions and possibilities of abuse. Of course, currently they are not such places. So, the 30-year-old first-time offender will very likely leave the prison at 50 with less remorse and more experience with violence. Great.

Yet, even under this flawed legal framework, it is possible to accord some dignity and compassion of a suspected or indeed a convicted offender. Unknown could have simply handed him to the police and seen the matter follow the course of law. But this rabid public shaming — using phrases like 'be a man' and ridiculing his body for being small and skinny — I am not sure exactly what it has achieved except a medial trial and creation of an ineffective, senseless model that neither prevents child abuse nor removes the stigma from what has been explicitly listed as a mental illness.

At worst, it criminalises a condition that cannot be helped without external support, making sufferers and potential offenders even less likely to come forward and ask for help.

Dipsikha Thakur is a trainee journalist with Outlook. She graduated from Cambridge earlier this year with a BA in English and Classics.