If Martina Navratilova and Leander Paes are basking in unlikely tennis glory, it's because of the athletic values they stand for. 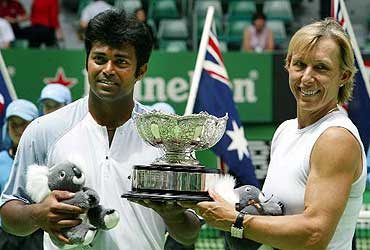 She’s 46, an age at which appearances in professional sport at the highest level are pooh-poohed upon. He’s going on 30, past his prime and slowly, but surely, seeing his craft slip into a gentle decline. With her 57 Grand Slam titles, she’s the second-most decorated woman in the history of tennis after Australian Margaret Court. He, at best, can be described as a comet that flashed briefly across the tennis skies, a competent doubles player who’s had his day out and has five Slams to show for it.

So, what binds together living legend Martina Navratilova and journeyman pro Leander Adrian Paes together? How do they find themselves on the same side of the court, playing for each other, rooting for each other, pushing each other? What explains this fairy-tale story -- the Australian Open mixed doubles title, beating Todd Woodbridge and Eleni Daniilidou 6-4, 7-5 -- this unlikely pairing have scripted in the twilight of their careers?

Coincidences and cosmic connections? Perhaps, bumping into each other at the 2002 US Open, when Paes had virtually thrown in the towel to find a partner, and she just happened to find him heading for the chief referee’s office. Leave it to Paes to tell it like a prolific storyteller: "There was this big lady blocking my way. If I went left, she would go left. If I went right, she would go right. She said to me, ‘you’re playing mixed doubles with me’."

Doubles pairings are mostly fascinating, regardless of whether they are planned by design, or are purely the result of convenience or serendipity. There isn’t a single magic formula that works. It’s simply a question of finding a good fit, communicating and understanding each other’s games, ironing out the edges, and trying to make it work. Sounds simple? Well, at times, it’s as simple as that.

On court, at their peak of their prowess, Mahesh Bhupathi and Paes were the anti-thesis of the other, complementing each other beautifully. Each was what the other wasn’t, the two pieces that completed the jigsaw puzzle that was their partnership. Bhupathi was a picture of stability: heavy serve, steady backhand return and groundstrokes, solid volleys; Paes was all panache and flamboyance, a darting panther at the net.

If Bhupathi and Paes were as different as chalk and cheese, Navratilova and Paes are a pair of Siamese twins. Forget age, for athletes like Navratilova (and Waugh and Jordan, and now Agassi) have shown that it can be eliminated from the playing equation. As players go, about the only difference in their games is the result of the hand in which they wield their respective racquets to effect the maximum damage on their opponents.

Both are out-and-out attacking players who believe in playing a straight-forward serve-and-volley game. Both consider themselves to be disciplined and earnest students of the doubles game, who love to try and answer the questions it throws up. Both have great respect for sport and great competitive instincts. Both hate to lose.

Most importantly, like in the best of relationships, both Navratilova and Paes personify and bring a common work ethic to the courts: grounded in commitment to give everything and to have a whole lot of fun while trying to pull it off. Says Navratilova: "Leander makes it fun to be on court, spiritually and of course tennis-wise. We both know how to play doubles, and that's what really makes it fun. I'm there where I should be and he's there where he should be, playing the right shots. It's sort of tennis the way it should be played."

Fun. It’s such an essential ingredient for enduring team success, be it at the work place or in the sporting arena. It embodies a certain looseness and ease, which allows people to be their honest selves and express themselves unabashedly secure in the knowledge that, no matter what the outcome, the basis and dynamics of this relationship won’t change. Says Navratilova: "The way I pick my partners, the most important thing is, are they nice people? Do I really enjoy being with them?"

Of course, Paes, a small fry swimming in a pond with big fishes, had more on his mind. Like a great deal of awe. Paes, who has an acute sense of sporting history, said after the finals: "Martina earlier today said she won her first Grand Slam in 1973. I was born that year. I grew up, my whole childhood, watching Martina play, create history winning those many Wimbledon titles. I never thought I'd be on the same side of the net as her."

The prospect of partnering a towering personality like Navratilova was very different from teaming up with players who would conventionally be seen as his peers, both in age and achievements. It was intimidating, not just while trying to hit tennis balls from the same side of the court but also, as he would later say in jest, following her in giving a speech at the presentation. But once on court, when the conversation revolved around tennis and where racquets did the talking, age-old sporting instincts took over. The game flowed.

For the unseeded duo, the mixed doubles at the Australian Open was a perfect outing. Five good wins over some decent -- and younger – teams, without dropping a set. It wasn’t that they were a cut above the rest. Just that they had fun, played the better tennis during the fortnight, and in the finals, they benefited from the jitters Daniilidou got on her serve. According to Navratilova, the gap between most of the teams isn’t that huge and that, of the 32 teams in a Grand Slam draw, at least half of them have a shot at the title.

Navratilova and Paes have committed to play together in the remaining three Grand Slams too. This is Navratilova’s final year on tour. Well, at least in this innings of her illustrious career, and who knows if there won’t be another. The fact that she has won another Slam will increase the attention she gets in the remaining majors, especially the French and Wimbledon, where tradition and nostalgia are always big draws with the crowds and the tournament organisers. And Navratilova is as big a draw as they come.

For Paes, Navratilova is probably the best thing that has happened to him at this stage in his career. Indian tennis needs him, and Bhupathi, as much as it did a decade ago, when he was a fresh-faced youngster ready to take on the world. There simply isn’t anyone ready to take the baton from him.

Last year was one of worst for Paes on tour. Another parting of ways with Bhupathi, no doubles silver to add in the cupboard, the disappointment of going back to qualifying for Davis Cup again. Times have changed. Paes is looking comfortable with his new partner, David Rikl. The duo made it to the quarter-finals in Melbourne.

And, more importantly, playing alongside with a remarkable 46-year-old looks to have helped him gain some much-needed motivation and perspective of where he wants his tennis to go from here. Says Paes: "Her zest for life, her passion for the game is mind-boggling. I'm going to be 30 this year, and I felt I was getting old. You know, Martina has kind of rejuvenated me, rejuvenated my spirit for the game. I'm very thankful for that." Quaint ways in which people touch other lives.

And while on the subject of mixed doubles, let’s hope that Agassi manages to persuade a certain Steffi Graf to keep his part of the wager of winning at Melbourne, and partner him for the mixed at the French. That would be something.

'India Have It In Them To Succeed'