Hang All The Hangings

Why not appoint an eminent persons group to examine in a time-bound manner whether the death penalty should continue to be on our statute book? Why not keep execution of all death penalties in abeyance till then? 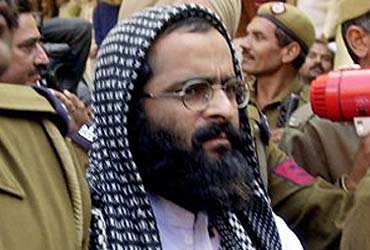 Mohd. Afzal Guru, the jihadi terrorist, played a leading role in the joint attack by the Lashkar-e-Toiba (LET) and the Jaish-e-Mohammad (JEM) of Pakistan on the Indian Parliament in December, 2001. The attack was thwarted by an alert security force guarding the Parliament, but not before 10 members of the security force, including a lady constable, had been killed by the terrorists in an exchange of fire.

He can still appeal to the President of India, Shri Abdul Kalam, for clemency, but there is no indication so far as to whether he would. There have been demands from sections of the political leadership in Jammu & Kashmir (J&K) as also from civil society human rights activists for the state to take the initiative to commute the death sentence to one of life imprisonment, irrespective of whether he submits a clemency petition to the President or not. There have been demonstrations in J&K against the death sentence.

Those opposing any clemency give three arguments: First, he was responsible for the intentional killing of 10 members of the security forces and, hence, showing any mercy to him could demoralise the security forces bravely confronting the cancer of jihadi terrorism. Second, the execution of the death sentence would deter similar terrorist attacks in future. Third, if the execution of the Sikh security guards who assassinated Indira Gandhi and the death sentence passed on those who were responsible for killing Rajiv Gandhi were justified, why should a death sentence passed against a jihadi terrorist for killing members of the security forces be projected as unjustified?

There is no reason for India to nurse any qualms over the award of the death sentence to this terrorist and over its ultimate execution, if it materialises. More death sentences are awarded and carried out in the Islamic Ummah than in the non-Islamic world. Death sentence is mandatory for narcotics smugglers in many countries of the Ummah. Acts of political violence—whether they amount to terrorism or not— are often punished with the death penalty. The recent instance of the execution of some Christians in Sulawesi in Indonesia, who were accused of indulging in acts of terrorism against Muslims, is an example. Appeals for clemency from the leaders of the local Christian community, the church and, reportedly, even the Vatican, were rejected by the Indonesian government. Fear of violent demonstrations by the Christian community did not deter the state from carrying out the death sentence.

Those in favour of the government of India taking the initiative in commuting the death sentence to one of life imprisonment argue that his execution could add to the anger against the government in J&K and thereby, create difficulties at a time when the security forces have been bringing the activities of jihadi terrorist elements under control. This could lead to a rash of new terrorist strikes, they argue. One saw, they point out, how the award of the death sentence to Maqbool Butt of the Jammu and Kashmir Liberation Front (JKLF) in the early 1980s led to the kidnapping and murder of Ravi Mhatre, an Indian diplomat posted at Birmingham, by the JKLF elements in 1983.

Certain other factors also need consideration. The assumption that death penalty acts as a deterrent has not been conclusively proved. Narcotics smuggling continues to take place despite the award of dozens of death penalty in many countries every year. In the US, which rigorously enforces the death penalty against those guilty of certain heinous crimes, such crimes continue to take place. Fear of death penalty has not deterred compulsive criminals from indulging in heinous crimes. We saw a recent incident in which a 53-year-old man took hostage some young girls studying in a US school and sexually assaulted some of them. In terrorism-related situations, death penalties often make heroes of the terrorists in the eyes of their communities and prove counter-productive.

In January, 1993, Mir Aimal Kansi, a Pakistani national, drove to the gates of the headquarters of the Central Intelligence Agency (CIA) in Washington and indiscriminately opened fire on the staff of the CIA arriving to work. He killed two officers and injured some others. During the trial, he was found guilty and sentenced to death. He was executed and his dead body returned to his tribal village in Pakistan. He became a local hero. A large number of people attended his burial function and his execution added to the tribal anger against the US.

In May, 1975, Carlos, who later became notorious and much dreaded as an international terrorist, shot dead two officers of the DST, the French Counter-Terrorism Agency, when they entered a place in Paris where he was staying in order to question him and escaped to Libya. He organised an International Front of Leftist Revolutionaries and carried out a number of terrorist strikes in West Europe, including France, before he was finally arrested at Khartoum in Sudan in August 1994, by the French counter-terrorism agency.

He was tried in France and found guilty. Since there is a ban on death penalty in France, he was merely sentenced to a long period of imprisonment, which would keep him in jail for the rest of his life. He has been forgotten and consigned to the dustbin of history. Had the death sentence been still in vogue in France and had he been executed, he might have become a hero to at least some sections of the people, just as Kansi did.

The European governments are now facing difficulty due to the increasing activities of the jihadi terrorists as seen in Spain and the UK. Well-informed sections of public opinion and professional counter-terrorism experts are advocating greater powers of detention, search, interrogation, surveillance etc for the police and other agencies to enable them to deal with the jihadi terrorists, but no one is demanding the re-imposition of the death penalty. They feel confident that they they can deal with the situation without the need for the re-introduction of the death penalty.

There is another aspect, which needs to be considered in any debate on this issue. The security forces are authorised by law to kill a terrorist or a dangerous criminal in exercise of the right of self-defence. They can kill in order to protect themselves or others, if they reasonably conclude that there is no other way of protecting themselves or others. A dilemma arises in respect of executing an arrested and convicted terrorist because he is being executed as a punishment for what he did in the past and not due to a fear of what he may do in the future. So long as he is in custody serving a life imprisonment, he can no longer kill. What is the point in executing him?

The time has come for the government to appoint an eminent persons group to examine in a time-bound manner the efficacy of death penalty as a means of preventing terrorism and other dangerous crime and suggest whether the death penalty should continue to be on our statute book. Till it submits its report and a decision on it is taken by the government, the execution of all death penalties could be kept in abeyance.