In his maiden appearance as a Test opener, the all-rounder plays the sheet-anchor role to perfection as his unbeaten 78 in the company of Boeta Dippenaar (46) leads the visitors' fightback after old warhorse Kumble had reduced them to 154-4. 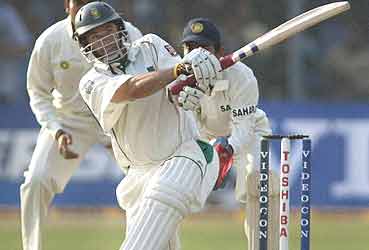 The inexperienced South Africans proved they were no push-overs as they launched a spirited fightback after a mid-innings jolt and kept themselves afloat in the first Test against India today.

Andrew Hall, opening the innings for the first time in his Test career, played the sheet anchor's role to perfection with a gritty unbeaten knock of 78 and guided the visitors to a comfortable 230 for four in their first innings at close on the opening day.

The right-handed Hall notched up his third Test half century as he batted right through the day on a good batting strip at the Green Park stadium.

Boeta Dippenaar was giving Hall company with a cautious 46 after Anil Kumble had done the damage to the South African innings by snapping up two wickets each in the pre-and post-lunch sessions.

Kumble provided the vital breakthroughs by evicting captain Graeme Smith (37) and Martin van Jaarsveld (2) just before lunch and then dramatically removing dangerman Jacques Kallis (37) and Jacques Rudolph (0) off consecutive deliveries just before tea to put India in the saddle.

But Hall and Dippenaar ensured that there were no further setbacks for the visitors as they defied the Indian spinners to remain unseparated in the last session which turned out to be disappointing for the hosts. The pair have already stitched 76 runs for the unfinished fifth wicket partnership which has helped the visitors to bounce back into the game after being 154 for four at one stage.

The South Africans began well on the much-speculated Green Park track but the two blows by Kumble undid the good work done by the openers to some extent after electing to bat first.

The two openers Smith and Hall provided a solid start to the innings as they played cautiously to the Indian new ball operators Zaheer Khan and Saurav Ganguly who failed to obtain much purchase from the track.

Smith was a trifle tentative in the initial stages of the innings but grew in confidence to unleash a few attacking shots on both sides of the wicket.

With the Indians opting to go into the match with three specialist spinners, Ganguly had to share the new ball with Zaheer but never really troubled the batmen.

Ganguly introduced Kumble as early as in the tenth over of the innings and the leg spinner responded after the drinks break by getting rid of Smith. Smith played onto his stumps as he went for a forward defensive shot much to the delight of the home crowd. His knock of 37 came off 66 balls and contained five boundaries.

Van Jaarsveld, who joined the action after Smith's dismissal, survived for just ten minutes as he fell leg before to Kumble.

From a comfortable 61 for no loss, the visitors slumped to 69 for two as Kumble's double strike brought India back into the game a few minutes before lunch.

In the post-lunch session, Hall and Kallis rebuilt the innings with a 85-run third wicket partnership.

It was turning out to be a frustrating session for the home team as Hall and Kallis played watchfully and were building the platform for a big first innings total when Kumble did the star turn, snapping up two wickets in consecutive balls just at the stroke of tea to suppress the spirited South African fightback.

The Karnataka bowler first removed Kallis by trapping him in front of the wicket as he went for a sweep and then Rudolph played onto his stumps, a dismissal similar to that of Smith.

Hall and Kallis looked in no discomfort as they went about consolidating the position for the team on a track which had eased out completely in the post-lunch session.

Ganguly employed a double spin attack with Murali Kartik beginning the proceedings after lunch while Kumble bowled from the pavilion end.

But the two spinners could not make much of an impression with the two batsmen executing the sweep shots.

Zaheer was brought in for another spell from the pavilion end in place of Kumble but the Baroda speedster could not provide the breakthrough.

The composed Hall slammed Zaheer to the boundary to notch up his third half century in Test cricket, completing the milestone in 198 minutes.

Kallis also achieved a personal milestone when he reached 33, becoming only the second South African to complete 6000 Test runs after Gary Kirsten who aggregated 7289 runs in 101 matches.