Another child succumbed to encephalitis on Sunday, taking the death toll over 70. 11 children died on Saturday and until Friday the death toll stood at 60. 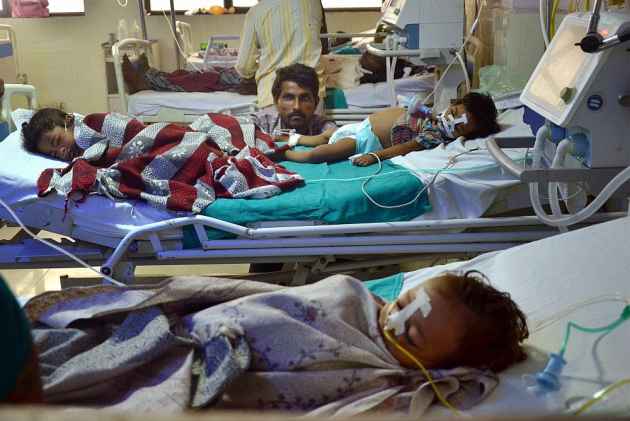 Another child succumbed to encephalitis on Sunday, taking the death toll over 70 children died on Saturday and until Friday the death toll stood at 60.

Earlier on Saturday, Uttar Pradesh Chief Minister Yogi Adityanath said that a magisterial inquiry has been ordered and a committee has been formed to look into the Gorakhpur tragedy.

Addressing the media, Uttar Pradesh Chief Minister, who briefed Prime Minister Narendra Modi earlier yesterday, said that he has asked a team of top ministers to determine if the death of the children was actually due to a disruption in oxygen supply at the hospital and assured to "not spare anyone found guilty".

At a press conference in Lucknow, Yogi also said that he has also sent two ministers to the BRD Medical College to investigate the matter.

He said, "We have suspended the principal of the BRD Medical College and taking him guilty for his actions and an investigation on him has already been ordered and is underway. Those found guilty won't be spared."

Adityanath also emphasised on the fact that Japanese encephalitis remains a challenge for his government and assured that a solution has been found to address the menace.

Minister of State in the Ministry of Health and Family Welfare Anupriya Patel said that Prime Minister Modi had especially asked her to visit the hospital and get the necessary information that may help in the issue.

State Medical Education Minister Ashutosh Tandon claimed that the deaths of children was not due to oxygen supply, supporting which he also released a list that claimed that most of the children died due to kidney failure and were premature.

He also said that there had been a delay in payment to the oxygen vendor by the college authorities and a probe has been ordered for this too.