The veteran RSS and BJP leader feels that those in the BJP who reacted strongly to the RSS Sarsanghchalak's remarks should then say they have nothing to do with the RSS, that they don't believe in these ideals, that whatever they were saying so far w 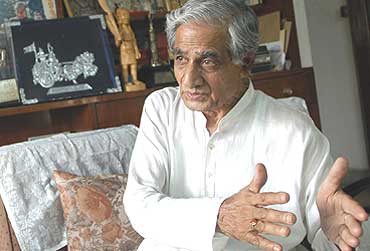 Veteran RSS and BJP leader Bhai Mahavir joined the RSS in 1942. Apart from being a pracharak, he was the vice-president of the Jana Sangh in the 1960s. Between 1968-1978 he was a member of the Rajya Sabha. From 1996-1998 Bhai Mahavir was a member of the BJP's working committee and president of the central disciplinary committee. During the NDA regime he was the governor of Madhya Pradesh. A descendant of freedom fighter Bhai Parmanand, the veteran leader is irked by the undermining of ideology within the BJP. Speaking to Outlook Saptahik's senior special correspondent he said if the party leadership wanted to give up its ideology, it should go join the Congress. Excerpts from the interview:

What is your opinion on Advani's remarks on Jinnah?

The Jinnah speech Advani was referring to, was nothing but crocodile tears because when a crocodile swallows a fish it sheds tears. Similarly, Jinnah wanted something and when he got it, he behaved like a crocodile.

But why did Advani praise Jinnah?

I am perplexed by Advaniji's statement praising Jinnah, though Jinnah was more secular than Gandhi when he opposed the Khilafat Movement. Later he understood that Muslims could be instigated into doing anything and he embarked on the same path. To term Jinnah as someone who creates history is beyond my understanding. For me, nation builders like Ashoka and the creator of modern India, Sardar Patel, are creators of history,  but now Jinnah has also become one. If persons responsible for dividing the nation are considered creators of history, then Bhindranwale is close to becoming one as well as all those leaders in the northeast who want to secede from the country.

Is the BJP also afflicted by the greed for power?

After Emergency when the Janata Party government was formed, members of the Jana Sangh also were part of it. For the first time, they tasted power at the  centre. After coming to power, efforts commenced to stay in office -- and there is no limit to how far a person can go in this endeavour. That is how coteries and groups get formed. From the time of the Janata Party government, this started in the Jana Sangh and the danger greatly increased in the BJP during the NDA government.

Did the BJP's basic character change after the formation of the NDA government?

The BJP did not learn any lessons from staying in power. The failure to form a government again at the centre did not reflect well in the behaviour of the party leadership, as it should have. After the electoral defeat, it would have been better if the party had marshalled all its resources and used them successfully. But that did not happen. The leaders have lost  contact with workers at the grass root level. The party started functioning as if it was a limited company. During elections, messages are being sent on the telephone, several lakh calls would be made and the people would only hear Atalji's words. The leaders have forgotten that man has not become a part of the machine which would start working at the press of a button. People became disillusioned with the party and started asking what the difference is between the BJP and others.

Why doesn't the BJP take your advice?

The party could have availed of my experience. It could have consulted me on this. Even out of courtesy, things could have been discussed but nobody did so. (Sundar Singh) Bhandariji and Vishnu Kant Shastri too had the same grievance. During the past two-two-and-half years, I asked so many times if I was in the party or not, if I had a place in the party or had been removed. If any disciplinary action had been taken then it should be revealed when, why and who had done it. Nobody speaks to me.

Why is the BJP is such a state?

When coteries are formed and a select few people surround leaders, the situation deteriorates. People within the party talk about Atalji and Advaniji on the sly but no one has the courage to come out in the open and say it. Leaders should ensure that their followers should have the courage to point out their mistakes on their face.

What are the lessons learnt by the BJP from the defeat in the Lok Sabha polls?

There was a chintan baithak in Mumbai to contemplate on the reasons for the electoral defeat. The baithak was held in a seven-star hotel where there were different types of restaurants and various types of delicacies were on offer. A journalist remarked if this was how the party mourned after defeat, how would it celebrate after victory. The party's first session was held under tarpaulin in an open maidan with durries spread on the ground. Where has that spirit gone? There were corruption charges against leaders but the party kept quiet. Neither did it say that the charges would be probed nor did it ask the accused for clarification. These are ominous signs for any party's health. There is little hope of improving the future.

To what extent are the party's top leaders to blame?

Those who get maximum accolades when the party succeeds should take responsibility when it goes wrong. If the BJP does not survive there will be no opposition in India. All talks of a Third Front is rubbish. There is no hope from the Communists.

Advani believes that sticking to ideology is not practical. What is your opinion?

I had also read that he said to come to power a compromise with ideology was required. He needs to be asked if his ideal is to come to power or strengthen his ideology? Advaniji is the president and if the president says we need to compromise with our ideology, then they should all go join the Congress and the matter ends there. If you're preparing for "national harakiri" then this is the right path. If there is no ideology, on what manifesto will the NDA contest elections? If such is the hunger for power then the ideals that you created -- Dr Mukherjee's views, which even Deen Dayal Upadhayay worked for -- all should be immersed in the Ganga at Har ki Pauri!

Are some BJP leaders trying to veer away the party from the Sangh's basic ideology?

It seems so. The way two-three leaders reacted sharply to the Sarsanghchalak's remarks! Creating such a situation does not befit the party leadership. They should then say they have nothing to do with the RSS, that they don't believe in these ideals, that whatever they were saying so far was rubbish and that now true knowledge has dawned.

Who is responsible for the five-star culture within the BJP?

Those who are promoting it should be asked. In our country, it is not indulgence but sacrifice that is worshipped. Krishna did not become the king of Mathura after slaying Kansa. After slaying Bali and Ravana, Rama did not rule their kingdoms. Now if you're not placing Rama and Krishna as ideals before yourself, then Aurangzeb, Shahjahan and Jahangir should be ideals. For power, kill your father, imprison him, have him crushed under an elephant's feet. Power is the biggest thing.

Are the BJP's ideals similar?

The language is such. It would be better if they themselves provide the meaning of their language when they say that the party should change its ideology so that it can come to power. If the party was created for power, then it'd be sheer destiny. I don't know how those who created the party -- Deen Dayal Upadhyayji and Shyama Prasad Mukherjeeji -- would how feel, or how happy their souls would be, wherever they are. But I find this situation very humiliating and painful.

When The Sacred Is Profaned