Getting Used To A President Trump

Trumpism is the outcry of the great masses of Americans who are economically dislocated, spiritually disoriented, generally miserable, full of hate, distrust and despair. 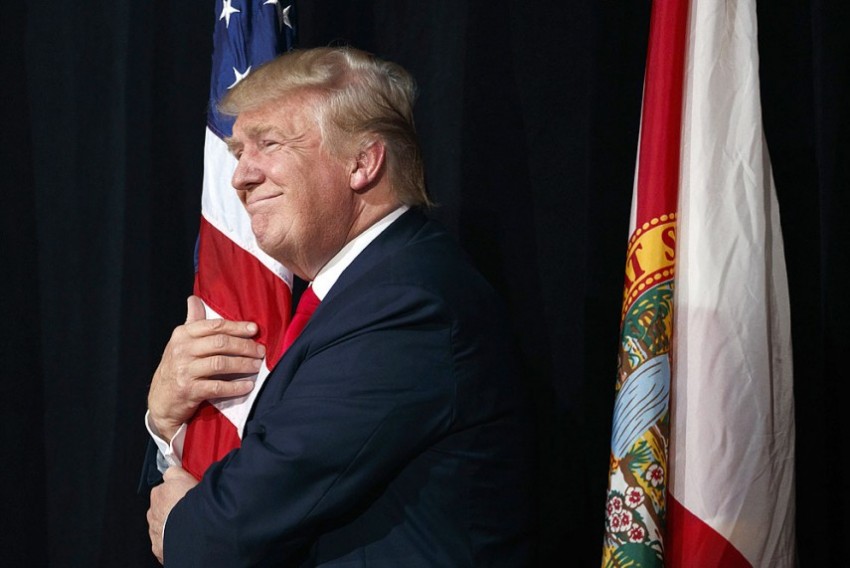 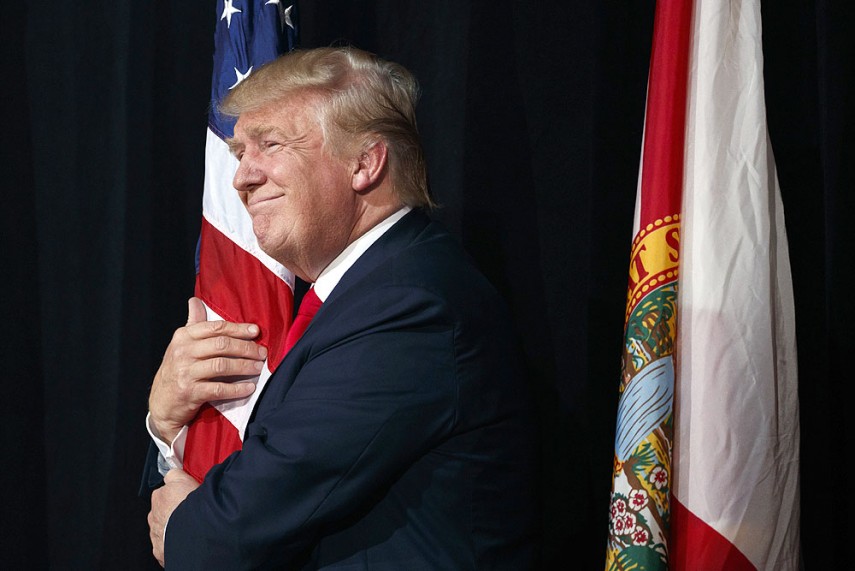 PRESIDENT TRUMP. I am still in a state of shock. But I had better get used to it.

This is not just another US election. In my life I have seen many. Some had results I liked, some not.

But this one is entirely different. This is an earthquake that changes the face of the planet.

How did it happen? Why? And why was it so completely unexpected?

IT WAS unexpected because of this pagan worship of the polls.

As I wrote last week, before it happened, these polls remind me of the Roman art of divining the future from the entrails of animals and the more modern art of the astrologers.

As long as I can remember, the polls have always been wrong. From time to time one poll got it right, like a broken clock that is right twice a day. This poll was then feted, until the next time, when it was again wrong like all the others.

This is true in Israel as in the US and elsewhere.

So will the media turn to the polls again in the next election? Sure. They have no choice. The polls provide ratings. They generate suspense. Instead of reporting only dull and repetitive election speeches, they produce excitement. Their ups and downs fill printing and broadcasting spaces.

In short, the polls are created by the media, for the media. They mean nothing. When the real results become known, they are forgotten until the next time, when the polls start again as if nothing has happened.

What's wrong? Well, almost everybody lies to the pollsters. It was demeaning for a voter to admit that he was going to vote for Trump, the preposterous choice of the coarse mob, instead of voting for the exquisite candidate of the elite.

To get anything like valid results, a pollster has to spend at least an hour with each pollstee, asking them roundabout questions about the various issues, such as jobs, arms, elites and such. And even then one cannot be sure.

I am not writing this in the hope that next time people will laugh when they see the polls. Without the polls, how will they think they know who will win?

WE DO not really know who Trump is, and what he will do during the next four years. We know only the Trump of the elections: a nasty person, a megalomaniac, a liar, an ignoramus. Some would add: a proto-fascist.

On the eve of the last free elections in pre-Hitler Germany, Joseph Goebbels, the mastermind of modern propaganda, wrote in his diary: "We must again appeal to the lowest instincts of the masses."

This could well be the motto of all fascist movements in the world. It certainly was the motto of Donald Trump in his campaign.

The lowest instincts of the masses lead them to hate foreigners, the members of minorities, the sexually different, and above all "the elites", generally located in the nation’s capital. These instincts lead them to believe in conspiracy theories, the wilder the better. They lead them to believe that dark forces are at work, undermining our beloved country, stabbing our heroic soldiers in the back.

In every country there are people who ardently believe in this kind of nonsense. Who trust their Leader. Who hate their enemies. Who want their country to be great again. Deutschland erwache! (Germany awake!),

In "normal" times, these elements vegetate on the fringes. Their voices are barely heard in the media and in parliament. But sometimes, somewhere, the scum rises to the surface. That is what has happened now in the United States.

SOME WOULD say: because of the unique personality of Donald Trump. The unique mixture of megalomania, showmanship and mass appeal. That is accurate, but it is not enough to explain this phenomenon.

There are Trumps everywhere at any time. They come and go without leaving a trace. Why this Trump? What makes this Trump so special?

In the beginning, he aroused derision – much like other demagogues, who were regarded for years as political clowns, before causing untold disasters. There was no derision left this week, when reasonable America shook in its boots. The clown may become a monster.

THE POPULAR movement that has sprung up around Trump resembles the eruption of a volcano. It comes from the depths of the earth.

This is not just a political movement put together by a clever politician. It is a natural phenomenon, a mass emotion, an expression of profound fears and longings.

It is caused, I believe, by the fact that human society has changed, leaving masses of disoriented people behind in misery and despair.

Globalization has changed the living conditions of billions, for better and for worse. Patterns of production and trade are unrecognizable. It's like an earthquake – mountains become valleys, valleys become mountains.

This has happened before in history. For example, the Luddites in England and "die Weber" in Germany in the early 19th century, who smashed the modern machines that deprived them of their jobs. It was a vain rebellion.

The main victims are the lower classes of the former master nations. The blue collars. Those who were yesterday proudly employed in skillful, well-paid and satisfying jobs, and now have to make do with much lower jobs, if any at all.

The American automobile, a world-wide symbol, the pride of the American nation, is now a despised wreck.

This breeds natural hatred for foreigners (the Asians who produce the cars) and the minorities (the Mexicans who compete for the miserable jobs still available). It breeds a fierce nationalism. The Detroit worker may be jobless, his home in danger of foreclosure, but he is still a full-blooded white American. He voted as such.

Trumpism is the outcry of the great masses of Americans who are economically dislocated, spiritually disoriented, generally miserable, full of hate, distrust and despair.

This is not a passing situation and a passing mood. Trumpism will continue to exist under President Trump.

THERE ARE enormous differences between the US and Israel.

The US is huge. Israel is tiny, smaller than many US states. The US is by now multi-cultural, Israel is definitely not. The US is rich in natural resources. Israel has almost none, except some oil in the sea, far from its shores. And so forth.

Binyamin Netanyahu is no Trump, not even half a Trump. But he is rapidly becoming one.

Netanyahu is a one-issue man. He gets his teeth into one issue, and there they stay for a long time.

Not so long ago, it was the Iranian Bomb. In a minute Iran would get it. That would be the end of the world, starting with Israel. So he declared war on Barack Obama, made a speech in Congress, shook the world.

And then he stopped. Practically overnight. No Bomb. No Iran. No end of anything.

Now it's the media. Netanyahu wants to conquer the media. Not some. Not most. The whole lot.

To put this in practice, Netanyahu took a very unusual step. When his new (and fourth) cabinet was formed, he retained for himself the Communications Ministry, a very minor ministry. now it becomes clear why.

The Jewish casino mogul, Sheldon Adelson, the benefactor of Trump, Is Netanyahu's greatest admirer (and his owner). He has created a daily newspaper that is distributed for nothing and devoted solely to Netanyahu and his wife. It has by now the largest distribution in the country.

Enough? Not by far! Netanyahu is not satisfied with Israeli public television, which is more or less neutral. Though it is much less influential than our two private commercial networks, Netanyahu is determined to replace it with a personal station.

This is now his (only) big concern. He set up a new TV corporation, shaped after the BBC, but suddenly he discovered that the new corporation, which is not yet on the air, is already full of "radical leftists" (anyone who is not an admirer of "Bibi"). So now Netanyahu wants to abolish it and retain the existing service, presumably after a thorough shake-up.

It appears that Sara'le ("Little Sara"), as she is generally called, personally makes all senior appointments in the country, including the army's Chief of Staff and the Director Generals of all ministries, solely on the ground of their personal loyalty to her husband (and herself).

At the end of the program, the editor and broadcaster Ilana Dayan read out an official rebuttal from Netanyahu's office. It went on for more than four pages (six minutes) and was full of personal abuse of Dayan, which she read herself slowly and with a straight face. Quite an entertaining experience.

With such very few exceptions, Israeli media are by now thoroughly cowed. Popular humor speaks of a court, a king, a queen and a crown prince. But it is not a laughing matter anymore: clearly Netanyahu wants to be an Israeli Putin or Erdogan. And now: a Trump.

LET US be fair. Miracles do happen.

President Trump may turn out quite a different person than the nasty candidate. He may be pragmatic in the good sense of the word, learn quickly, govern sensibly.

As our Muslim friends say: Inshallah, if Allah wills it.

Did White-Working Class Voters And Hispanics Win Trump The Election?