General Malik was not known for his fairness while he was in service. Even six years after his retirement, he has not changed. That is evident from his book. 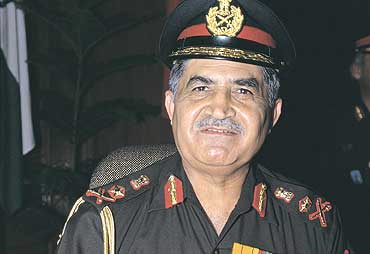 The perennial debate over the functioning of the intelligence agencies between the Army and the  agencies has once again been revived following the publication by Gen. V.P.Malik, who was the Chief of the Army Staff (COAS) at the time of the Kargil conflict in 1999, of his memoirs titled, Kargil: From Surprise To Victory.

He states that  Pakistan's successful intrusions reflected a major deficiency in our system of collecting, reporting, collating and assessing intelligence. He  throws stones at the agencies from his safe sanctuary of retirement, hoping that people would have by now forgotten his sins of commission and omission. The book is about how despite being, according to him, let down by the intelligence agencies, he and the army, operating under his leadership, retrieved the honour of India and ejected the Pakistani intruders from the mountain heights they had occupied.

As I read his claim and his account of his great leadership of the war as projected by him, my mind went back to December 1971 when I was a young officer in the Research & Analysis Wing (R&AW), India's external intelligence agency, then headed with great distinction by the late R.N. Kao. Kao was  professional to his finger tips and  known for his operational brilliance and personal humility and a readiness to give credit where it is due and to accept the inadequacies of the organisation, which he headed for nine years.

After the brilliant win of the Indian Army against its Pakistani counterpart in 1971, General (he was not yet a Field Marshal) Sam Manekshaw wrote a very warm letter to Kao, expressing his appreciation of what he described as the brilliant work done by the R&AW in the months preceding and during the war. Kao marked the letter to Indira Gandhi, the then Prime Minister and the political architect of the victory, for perusal.

The letter came back from her with the  remark : "The General is generous in his praise because he won the war". Left delicately unsaid was the  truism that the army would have been the first to put the blame on the intelligence agencies had it lost the war. The Indian army is yet to produce a leader, who does not look for scapegoats when faced with failure.  And what easier scapegoats than the intelligence agencies! One cannot blame General Malik for not being an exception to this rule.

Even during the 1971 war, while the Indian Army covered itself with glory in the Eastern sector, it did not do that well on the Western sector. Its senior officers responsible for the Western sector shifted the blame for their lack-lustre performance  to the intelligence agencies.

Why was the Indian Army taken by surprise in the Kargil heights? What was the surprise about? How did it happen? The Army was in the habit of withdrawing from the LOC in the Kargil area every winter and returning to its posts after the onset of spring. Thus, the LOC used to remain unprotected throughout the winter. Pakistan took advantage of this after General Pervez Musharraf became the Chief of the Army Staff (COAS) in October,1998. During the winter of 1998-99, he sent his troops across the LOC and occupied the heights left unguarded by the Indian Army.

To put it in simple words, General Malik's contention is that the Indian intelligence should have come to know of the intentions and plans of the Pakistan army. According to him, it was not aware of the full extent of the increase in Pakistani Army deployments and movements across the LOC, which would have preceded the Pakistani Army's foray into our territory during the winter.

The fact of the matter is that as early as June,1998, even before Musharraf had taken over as the COAS, Shri Shyamal Dutta, the then Director of the Intelligence Bureau, had sent a detailed wake-up call to the Prime Minister, the Army headquarters and others, warning of the  training of large numbers of Pakistani irregulars across the Kargil sector. He also reported that increased Pakistani military activity had been noticed along the LOC in the Kargil sector. In July,1998, the IB further reported  new mine-laying  and other ominous activities by the Pakistan Army. The R&AW  reported  the induction of new Pakistani units into the area. It also warned that the Pakistani troops were being given special training.

Did General Malik do any of those things? No. As a professional Army officer heading the Army, it was his responsibility to have warned the government of the various likely scenarios in the light of the intelligence reports and advised on action to be taken. He failed to do this. And, when after the onset of spring, his troops, while returning to their posts, found the Pakistanis ensconced there, he blamed the intelligence agencies for not warning him that the Pakistanis intended to do this.

Months later, during a one-to-one meeting with Kao to discuss the report of the Kargil Review Committee (KRC) headed by Shri K.Subramanyam over which Kao had expressed his misgivings, Shri A.B.Vajpayee, the then Prime Minister, asked him for his considered opinion as to why the Kargil conflict happened. Kao told me that he replied to Shri Vajpayee as follows: "Sir, General Malik went into a happy sleep during the winter. He is now blaming the intelligence agencies for not preventing him from sleeping."

It was alleged that an Army Brigadier posted in the Kargil area, who had  also  warned General Malik of likely Pakistani intentions and moves, was sought to be intimidated into silence by General Malik through a departmental enquiry when he tried to go to the media with his story. It was also alleged that a distinguished journalist was sought to be black-listed and denied access to the army headquarters when in one of his articles he pointed out that there were no Pakistani intrusions in the areas where the Border Security Force (BSF) was deployed because it did not withdraw its men from the LOC during the winter, despite being ill-equipped to meet the rigours of the cold.

During his tenure as the COAS, General.Malik sought to marginalise the role of the  JIC and make the COAS not only the Czar of the armed forces, but also of the Aviation Research Centre (ARC), the Special Frontier Force (SFF) and all technical intelligence (TECHINT) capabilities. The Special Task Force for the Revamping of the Intelligence Apparatus, which the Vajpayee Government had set up after the Kargil conflict, had asked the National Security Council Secretariat (NSCS) to prepare a statement of inputs received by the JIC and its successor the NSCS from the intelligence agencies during the months before the conflict.

During the testimonies before the Task Force, the army sought to damn the performance of the civilian agencies. The Air Force and the Navy were more objective and  balanced and highlighted the good as well as the bad points. The efforts of General Malik to get control of the ARC, the SFF and the TECHINT capabilities of the R&AW failed  partly due to strong opposition from the Air Force and the Navy to his demands and partly due to his failure to convince the Task Force of the need for such action.

The Task Force had the benefit of a detailed presentation by some senior officers of the Army on the performance of the civilian intelligence agencies before and during the Kargil conflict. In an attempt to buttress General Malik's demand for the transfer of the ARC to the control of the Army, one of the officers strongly criticised its performance. The Task Force confronted him with a copy of a letter which General Malik had written to Shri Arvind Dave, the then chief of the  R&AW, after the war was over praising the performance of the ARC. He and the other officers were confused. After brief consultations among themselves, the officer replied:" That is one of the routine letters of appreciation which the chief writes to everybody after a war is over. It does not mean anything." That was the attitude of General Malik and his officers to the intelligence agencies.

In other countries of the world, whenever an enquiry is ordered into military allegations of an intelligence failure, the enquiry committee has a representative of the intelligence agencies to ensure that the committee, in its deliberations, is fair to the intelligence agencies. The KRC had no representative of the intelligence community. The Committee showed an incorrect eagerness to protect General Malik from any blemish despite indications, which did not reflect well on the way General Malik had handled the situation in the days before his visit  to Poland when worrisome reports regarding the extent and the nature of the Pakistani intrusions started flowing in from his own units.

General Malik created a messy situation  for himself, but he came out of it with a brilliant victory. Why blame him for creating the messy situation in the first instance, when he and his men had won a brilliant victory in the end at a tremendous sacrifice? That seems to have been the attitude of the KRC. They put the blame on the intelligence agencies for whatever had gone wrong and whitewashed the sins of commission and omission of  General Malik.

Our civilian intelligence agencies are not perfect. They have many inadequacies. They were found wanting on many occasions. I have myself drawn attention to these in many of my articles. Despite this, I still retain, 12 years after my retirement, many friends and well-wishers in the intelligence community because I try to be scrupulously fair in my criticism. I was known for my fairness while I was in service. I am known for my fairness even today.

Unfortunately, General Malik was not known for his fairness while he was in service. He was perceived by many in the community of senior government servants and national security managers as a compulsive fault-finder and scapegoat-seeker. Even six  years after his retirement, he has not changed. That is evident from his book.

Shri Vajpayee, the Prime Minister at the time of the Kargil conflict, and Shri George Fernandes, the Defence Minister, both denied allegations of intelligence failure immediately after the war was over.

Whom to believe: Shri Vajpayee and Shri Fernandez or General Malik?

B. Raman is Additional Secretary (retd), Cabinet Secretariat, Govt. of India, New Delhi. He was a member of the Special Task Force for the Revamping of the Intelligence Apparatus set up by the Government of India in 2000 to recommend follow-up action on the report of the KRC .

In the full dossier on Kargil linked below, please do also check out: War And Witch-Hunts