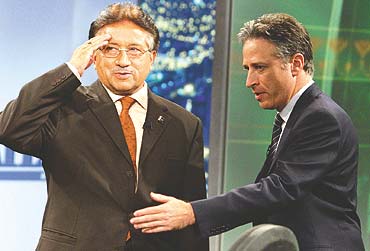 According to reliable sources in the Pakistani military, there are signs of embarrassment and unhappiness in sections of Pakistan's armed forces over the way he conducted himself in public and TV interviews during his recent visit to the US and the UK. These are not confined to only retired officers. For the first time, even serving officers have been expressing their disapproval of the way Musharraf has been conducting himself.

In the past, skepticism over Musharraf's policies and conduct was largely confined to serving officers of the Air Force and, to a smaller extent, the Navy. Senior serving officers of the rank of Major-General and above in the Army, who largely owed their rise to him, refrained from any criticism. It is no longer so after his performance in the US, which many regard as undignified of a head of state.

Questions are being raised about the propriety of his misusing an official visit at government expense for the private promotion of his book. It has been alleged that many of those connected with the publication of his book such as the ghost-writers, his local agents in Pakistan, translators etc travelled by the President's Air Force plane at the state's expense.

Lt.Gen.(retd) Mahmood Ahmed, who was the Director-General of the Inter-Services Intelligence (ISI) at the time of the 9/11 terrorist strikes and who was present in the US on an official visit on the day of the strike, has reportedly been telling his friends and colleagues that Musharraf's statement that Mr Richard Armitage, the then US Deputy Secretary of State, had threatened to bomb Pakistan back to the stone age was not quite correct though he (Mr Armitage) did use strong language. Lt.Gen.Ahmed, who now actively works for the Tablighi Jamaat, has been avoiding the media since Musharraf made his controversial statement in a TV interview in the US.

Musharraf's disclosure in his book about the payments made by the US' Central Intelligence Agency (CIA) to the government of Pakistan for every terrorist suspect caught and handed over to the US agencies has also come in for strong criticism. It is learnt that Lt.Gen. Ashfaq Ahmed Kiyani, the present DG of the ISI, has told his colleagues that he was not aware that Musharraf has disclosed this in his book. According to him, Musharraf never got the manuscript of his book cleared by the ISI and the GHQ before giving it to his publishers.

It is also being alleged that the Foreign Office was not kept in the picture by Musharraf regarding his various engagements and interviews in the US connected with the release of the book. These were handled directly by his agents in collaboration with the publishers.

Musharraf's remarks about the Taliban and Dr AQ Khan, the nuclear scientist, have also not gone down well with his colleagues in the army and scientists in the nuclear establishment. His projection of AQ Khan as a greedy, money-minded individual has shocked many in Pakistan. It is being pointed out that the Taliban was steadfast in its loyalty to Pakistan and that AQ Khan was the only genuine hero produced by Pakistan since it became independent in 1947. That Musharraf has let them down under duress from the US has shocked many.

Sections of the Urdu language press of Pakistan have described Musharraf as a habitual "U-turn maker", who keeps making U-turns depending on the circumstances. According to one of them, while he tried to project himself as a statesman par excellence, he has come out as a hypocrite par excellence.

Commenting on a speech made by him at Brussels on his way to Havana describing the Taliban as more dangerous than Al Qaeda, the Jasarat wrote on September 14, 2006:

"Musharraf said that we are not the makers of the Taliban, but he forgot that the entire world is aware of the reality. Gen (retd) Naseerullah Babar (Mrs.Benazir Bhutto's Interior Minister in 1993-96) has been propagating throughout that it is wrong to consider the Taliban as a group of Afghans. They are our children, but under pressure Musharraf conveniently handed them over to the US."

The paper asked whether Musharraf would similarly betray Dr AQ Khan as a foreigner from Holland, who was invited to work in Pakistan and who let down Pakistan. It further asked Musharraf whether he would tell the US under pressure that Pakistan did not ask AQ Khan to produce the atomic bomb and that he produced it on his own without the knowledge of the Pakistani military.