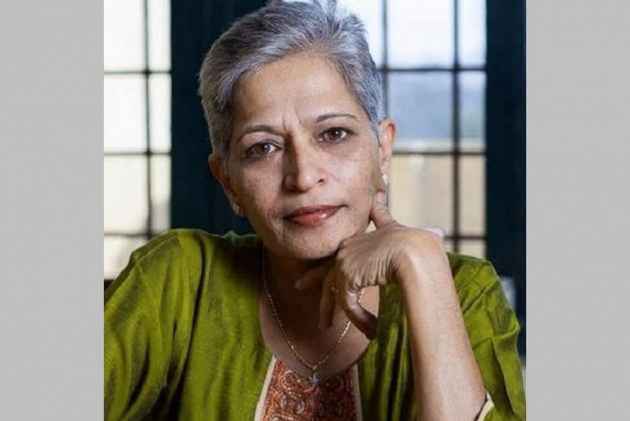 Even as her supporters are commemorating slain journalist Gauri Lankesh on her 56th birthday today, her brother said he would soon seek CBI probe into her murder but her sister said she was happy with the ongoing investigation by the Special Investigation Team (SIT).

While Gauri’s sister Kavitha expressed confidence on the Special Investigation Team (SIT)probing the case,their brother Indrajit said he would move the High Court for a CBI probe.

"Today is Gauri's birthday; it has been almost five months now...The investigation is like stagnant water. I personally feel that politically it (investigation) is going as one sided," Indrajit told reporters.

He said he had decided to move the High Court seeking a CBI investigation, because he wanted a 'fair probe' as he felt there was 'political pressure' on the SIT.

"Today I have taken a decision..I have also spoken to our advocate. Very soon I will approach the High Court requesting for a CBI probe, because for five months SIT has done its job. But I somewhere feel that due to political pressure they are investigating in one particular angle," he said.

Indrajit said he had taken the decision as he wanted to ensure that the probe was carried out in 'all angles' so that Gouri's real killers were nabbed and the actual reason behind the killing known.

Kavitha begged to differ saying there has been good progress in the SIT probe and she 'trusted' the agency.

She said SIT asked for a month's time and were updating her and her mother about the progress of the probe.

"There has been good progress.They have evidence but are taking time so that they have solid evidence to avoid any gaps. I trust them," she told reporters in another press meet.

Asked for her reaction to Indrajit's comments, she said "I don't know what he is saying....Without speaking to (SIT) officers or knowing things, it is wrong to comment."

On the move to seek a CBI probe into the case, she said it would only give out a wrong message as the investigation would have to start from the beginning.

Moreover not one of the 13 cases from Karnataka being probed by CBI had been solved yet, she said.

"When SIT has made such a progress at the time when it is ending if it goes to CBI they will start from the beginning."

Both siblings also differed about observing the day as 'Gauri Day', organized here to commemorate her 56th birthday.

While Indrajit termed the event, which he did not attend, as one sponsored by Chief Minister Siddaramaiah, Kavitha said it was organised by Gauri Memorial Trust and government had nothing to do with it.

Indrajit said it was time society questioned Siddaramaiah and the Congress government about the culprits after five months. "I don't think I will get justice there," he said.

To this,Kavitha said the event was organised by the trust and money that came in as donations has been accounted for.

The trust was formed in December 2017 in memory of Gauri Lankesh with an intention help launch a publication akin to her eponymous tabloid and to promote development and investigative journalism.

Gauri Lankesh, known to be an anti-establishment voice with strident anti-right wing views, was shot dead by unknown assailants at her home here on the night of September 5 2017.

The killing led to national outrage and protests by many groups over "rising intolerance" in the country and attempts to muzzle dissent with the criticism targeted at the Modi government and right wing groups.

State Home Minister Ramalinga Reddy had in November last year said the killers would "100 per cent" be nabbed in a few weeks, even as he claimed that SIT had clues about the assailants, but those could not be disclosed at the moment.

The state government has announced Rs 10 lakh reward for anyone giving clues about perpetrators of the crime.

SIT had in October released sketches of two suspects and CCTV footage in connection with the case and had sought people's help in nabbing the accused.