If it's June, it must be Wimbledon. Green grass and white clothing. Charm and tradition 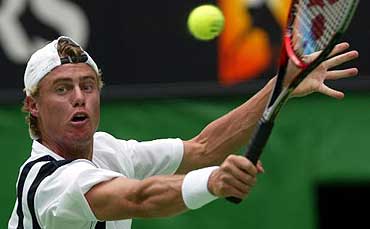 If it’s June, it must be Wimbledon on the sporting calendar. Green grass. White clothing. Blue skies that turn grey and blue again just like that. Red strawberries. Colourful crowds. Colourful, and some colourless, players. And, some good ol’ fashioned lawn tennis, the way it was intended to be played. After months of watching players slug it out on clay in matches that would test the patience of even the Test cricket buff and the cleaning prowess of washing machines, it’s a blessed relief to see tennis visit its roots.

The shift in geography, from the red dirt of Paris to the green grass of London, will result in subtle linguistic changes, which will underscore a momentary shift in the balance of power on the men’s circuit -- away from the Spanish-speaking swingers to those inclined to use the Queen’s language. On court, "vamos" will at last give way to its distant English cousin "c’mon" as the most-spoken word of the fortnight. It will be a brief interlude, a fortnight at best, but a welcome one.

Much as we clamour for change and newness of things, some people and things remain special for the very reason that they are caught in a time warp, in a genteel, comfortable place. The joy of being one with their experience is partly in knowing beforehand what lies ahead at every turn, and of the same, familiar script being enacted over and over again.

Wimbledon is one of those charming sporting events that continues to stand by tradition without appearing outdated (mostly), stir up nostalgia while making people smile, arouse passions without breeding animosity. Year after year.

Yet again, Tim Henman and Greg Rusedski will kindle British hopes that this will be the year when a homegrown man (or adopted son) finally puts the ghost of Fred Perry to rest and lifts the coveted trophy. They’ll be reminded that they have been saying so for the past five years, with Henman reaching the semis as many as four times, but in a tussle between reason and passion, where does reason stand? Instead, they’ll cling to hope, cite the law of averages, the dearth of grasscourt specialists, and what have you.

Hen-mania will sweep Wimbledon. The unlucky hordes who don’t manage to find a way in to Centre Court will squat on ‘Henman hill’, the lovely grassy knoll outside with the giant TV screen, and scream and sigh in tandem with Henman’s game.

Perhaps, the skies will open up and play havoc with schedules. But, many won’t mind. Sir Cliff Richard, resident tennis expert and crooner, will once more revive the swinging sixties on Centre Court. Londoners will hope that, to make up for lost time, play will take place on the first Sunday of the tournament and it will be declared a People’s Day, with tickets being sold on a first come-first serve basis. They’ll pack up their house, join the snaking queue leading up to the All-England Club in the evening to buy tickets for next day’s matches, happily park themselves on the pavement, stay up all night, and generally try and come up with a whole lot of ways to have a whole lot of fun.

Court 2 will try and live up to its reputation of being the "graveyard of champions". Each time a seeded player steps on it, we’ll wait with bated breath to see whether they are dead and buried, or whether they live to fight another day. During the first week, many seeds, specially those who look upon the court as a minefield and prefer to play from behind the baseline, will be scalped; some big cats will fall by the wayside.

A lot of big cats will be missing -- and they’ll be missed dearly. Sampras, Krajicek, Sanchez-Vicario, Ivanisevic, though the Croat has done half his Wimbledon role by serving his quota of verbal aces while announcing his withdrawal from the tournament. "When I came in 2001 as a wildcard and won the tournament, I said to God, 'just let me win this and I don't care if I never play tennis again.’ I kept asking God to give me one more chance. Probably he heard me and he is thinking, 'What are you doing here, go home.' It is not so easy to negotiate with the guy upstairs, he is non-negotiable." For good measure, he added deadpan: "It's like going to Rome and not seeing the Pope; it's frustrating to come to England and not go to Wimbledon. I don't want to go there and crawl like a pig on Centre Court. If I cannot serve, then there is not much for me to do on the grass. Perhaps, I can cut it or help draw the lines. Or even serve some strawberries."

A bunch of players in the main draw could sign up to give the grass courts a manicure or serve strawberries, and the fans won’t mind. If variety is the spice of life, the current lot of tennis players are trying hard, from the baseline, to dispel that notion. And, you know what, they are winning. Serve-and-volley tennis on the men’s circuit is going the dinosaur way.

Women players embraced the baseline years ago, with reason: you are a sitting duck if you tried to follow a meek serve to the net. But the men, with their cannonball serves? With surfaces getting slower, balls being made slower (ironically, to rein in the big servers), the time of serve-and-volleyers has come and gone. Serve-and-volley will help you do well at Wimbledon, but with that game, you’ll be murdered the rest of the year. Not surprisingly, kids are advised not to base their natural game around it anymore. It makes the tennis more monotonous and less interesting.

Purists might scoff, fans might complain, but bookies love it. When was the last time the men’s title race looked as open as this? You’d have to go to 1973, when a players' boycott severely depleted the field. Since then, a handful of players have made grass their preserve and practically ruled Centre Court. Borg, Connors and McEnroe gave way to Becker and Edberg, and then Sampras took over. And all along, snapping at their heels were quite a few fine grass-court players, who, on their day, could easily wipe the leading lights off court.

This year, the highest seeded natural serve-and-volleyer is Henman, and he is seeded as far back as tenth. But even he would fancy his chances, much like other serve-and-volley specialists like Mark Phillippousis, Rusedski, Taylor Dent, hell, even, Max Mirnyi would consider himself in the mix. Strangely, so would the back-courters, knowing that most of the two-step dance artists are basically rhythm players and have big issues with consistency. Hewitt, Agassi, Roddick… Defending champion and top seed Hewitt, a hound dog on court, has a draw filled with floaters, and will have his hands full. It’s all set up nicely for Agassi, who is loved by Wimbledon, has learned his way on the grass and has a relatively favourable draw.

On the women’s (at Wimbledon, for official purposes, they continue to be addressed as ‘ladies’, and the men as ‘gentlemen’!) side, the debate will be as much about who will win as about the inequity in prize money. Another year, the All-England Club, in one of its rare misdemeanours, will pay women lower prize money than men. Noises will be made, but tennis will go on. The Belgians, Kim Clijsters and Justine Henin-Hardenne will look to continue their winning ways; the bevy of upcoming Russian players will look to make a mark on the grass. But on these fast courts, it’s hard to look beyond the Williams sisters.

Wimbledon has become the keeper of dying art forms in tennis, if not by circumstance, then by design. It’s the only Grand Slam, for that matter, the only tournament, that gives doubles a place in the sun. It’s an intent that is expressed in various ways. Like scheduling interesting doubles match-ups on the show courts, even during the first week of the draw, when too many matches have to be crammed in (look out for Paes and Navratilova, in what, she says, will be her final appearance here). Or like sticking with the best-of-five sets format for men’s doubles, right through the draw, which makes more demands on players and gives it a Slam feel. Gestures such as these make Wimbledon special, for just about everyone involved, barring those who speak Spanish and have a fondness for clay.

From this year, another quaint practice that defined Wimbledon, of players bowing to prince and princess, duke and duchess, in the royal box, has been done away with. Out of habit, though, as they walk on to the historic and hallowed Centre Court, some men will bow, some women will bend their knees and go through with the curtsey anyway. They’ll laugh about it, along with the best tennis crowd in the world, and it’ll become another yet Wimbledon moment.

Come Monday, 1 pm, Greenwich Mean Time, as Hewitt and qualifier Ivo Karlovic walk through the tunnel leading on to the Centre Court for the opening match, perhaps, their eyes might catch lines from Rudyard Kipling’s immortal poem ‘If’ scrawled above the door that opens to the court:

"If you can meet with triumph and disaster

And treat those two impostors just the same."

It’s a powerful reminder that no other tournament holds these words closer to its heart. Let’s play.

Just What The Doctor Ordered