'Fund Raisers And Political Managers Have Taken Over The BJP'

The firebrand Hindutva icon on why she was expelled from the BJP, on Sonia Gandhi, on why the NDA did not hand over the undisputed land for temple construction and on plans for her new party. 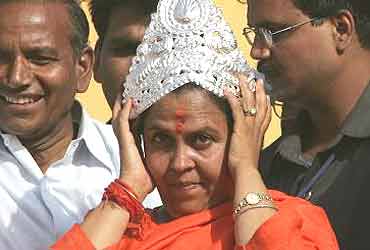 Nagendar Sharma: Has Indian politics become purely personality-based and have ideology and principles become a thing of the past?

Uma Bharti: Well, traits of hollowness can be seen in politics internationally, and it has different manifestations in different countries. I follow politics in America, Britain and India very closely. What I find is that if it is personality cult in one country, it is lack of ideological issues in another country --  it is superficial politics which has taken over. There was a time when you had people like Pandit Deen Dayal Upadhyay, Jawaharlal Nehru, Ram Manohar Lohia and E M S Namboodiripad. Do you have anyone in politics today who matches their stature?

Question from Roorkee: Umaji you are speaking about hollowness in politics, and it is correct that it is only perhaps in politics where you need solid ideological base, but what we are seeing is that leaders stay in a political party till it suits them and then form their own parties without any basis. Which way are things heading?

Uma Bharti: Well, it is the duty of political workers to ensure that their party does not deviate from the basic principles for which it was formed. If it does, workers have to put pressure on leaders and see that hollowness does not take over. However, what is presently happening is that fund raisers and political managers have taken over the parties. This is a dangerous trend which needs to be reversed and I have confidence in the people of this country that they would do it. We should not forget the might of voters -- after all they made mighty leaders like Indira Gandhi bite the dust in 1977 after the emergency. Another disturbing trend seen in last two decades is the rise of castesism, and I am pained to say that people of our country have been swayed by this wrong trend in some areas. These trends need to be reversed.

Question from Gwalior: Umaji, you were one of the frontline leaders of BJP and the main architect of their victory in Madhya Pradesh assembly elections in November 2003. Why is it that you decided to part ways with a party of which you had been part and parcel for decades? Isn't it a clear sign of unfulfilled personal ambitions?

Uma Bharti : Yes, I had been a part of this movement for decades, but when I found that the basic principles for which the BJP had been formed were not being followed and the party had been taken over by political managers and fund raisers, I decided to raise my voice against it. However, I found that the voice of genuine party workers and leaders attached with the masses was not being heard, there was no way left other than to provide a new body to the BJP soul, for which I have taken the lead. Unfortunately, the tragedy of BJP has been that when the culture of political management spread in the country, such managers began to dominate the party and stalwarts like Atal Behari Vajpayee and L K Advani did not play the role which was expected of them, which led to the weakening of the party. At such a time, by getting out of this mess I have fulfilled my national duty, as the option before me was to either become like these political managers or not to accept the hijacking of the party and I chose the latter. I could not have been a part of the process of corporatisation of politics where fund raisers were taking the place of political leaders.

Nagendar Sharma: But Uma Bharti, the reality of Indian politics has been that leaders who have left main political parties have not been able to do much, especially when you look at parties like the BJP and Left, who call themselves cadre-based parties.

Uma Bharti: The problem is that media looks at only one aspect of the whole thing. You are talking about those leaders who have been unsuccessful after leaving their parties or having been thrown out of their parties. Please also talk about leaders like V P Singh, who after leaving the Congress party brought it to such a position that after he left the party in 1988, it has never been able to come back to power on its own; even today, the Congress party has been forced to run a coalition government. Also do not forget the CPI split of 1964, which resulted in the formation of CPI(M), which has been successfully heading a state government in west Bengal for nearly 30 years now. Why do you forget that Jayalalitha formed her own party coming out of the parent outfit, also do not forget Chandrababu Naidu’s party. Similarly, did Chandrashekhar not leave his own party? Why do you recall only unsuccessful names? While discussing leaders who left their parties or were thrown out, mention the successful names also.

Question from Bihar: Umaji, these days the trend in major political parties is to push back the leaders with a mass base. One such example is you. Many senior ministers in NDA government were those who could not win an election and similar is the case with UPA government. Is that the reason for increasing disconnect among the people and the leaders ?

Uma Bharti : Well, I do not think that those who cannot win an election should not be made ministers. An individual may not be a popular mass leader but could be a good minister. What is required is a mix of leaders with a base and those who are otherwise capable. What has happened in BJP and other main parties, as I said earlier, is that political managers have hijacked the parties.

Question from Indore: Umaji, whatever you may say after being expelled from the party, but the fact remains that you were part of the BJP-led NDA government which was in power for almost six years. Can you tell us what did you do for the construction of Ram temple at that time?

Uma Bharti : During the last days of NDA government, we had made serious efforts for the construction of Ram temple at Ayodhya and had held talks with Atalji. He had entrusted the responsibility of this work to me and Arun Jaitley, but some officials of the PMO who wanted a way out for the temple construction, did not favour any role for the VHP in this. Such an attitude of these officials complicated the issue which led to delays. The efforts were to hand over the undisputed site of Lord Ram's birth place to Ram Janam Bhoomi Nyas, and there was no problem as this land was under the control of Central government.

Nagendar Sharma: But this has been one of the core issues of BJP's politics and if there was no problem in handing over undisputed land to Ram Janam Bhoomi Nyas, why did it not happen?

Uma Bharti : That is what I am going to tell. When our efforts were on, assembly elections came in Delhi, Rajasthan, Madhya Pradesh and Chattisgarh in November 2003. BJP victory in assembly elections in three states gave a false impression to the then party president Venkaiah Naidu that it was because of him that the party emerged victorious. He along with two-three other leaders floated the idea that the BJP-led NDA alliance would be able to win a third consecutive term at the centre, and at a later time the temple construction could be brought on agenda. These leaders said if the temple issue was raked up at that juncture, it might lead to disintegration of NDA and feared that it could lead to losing the general elections. Therefore in the greed of forming a government third time consecutively at the centre, these leaders gave up the temple issue, despite the best efforts from people like me, they sacrificed the basic aim of the party.

Question from Delhi: Umaji, after being out of the party now you are talking about corporatisation culture in the BJP and its leadership's greed for a third term at centre being responsible for the Ram temple not having been constructed in Ayodhya, but is it not a fact that had they made you the Chief Minister of Madhya Pradesh you would not have been saying all this. On on the other hand, the country has a leader like Sonia Gandhi who first refused Prime Ministership two years back and has now even resigned as an MP. Isn't she as a leader taller than all others?

Uma Bharti : Let me first make it clear to you that I had myself given up the chief ministership of Madhya Pradesh, why should I have later clamoured for a post which I had voluntarily given up earlier? I would not give any further clarification on this issue.

So far as your praise of Sonia Gandhi is concerned, let me tell you that she is the leader who had imposed mid-term elections on the country in 1999. How can you forget that? Don't you remember how she had gone to Rashtrapati Bhawan after Vajpayee government fell by one vote in April 1999 and had claimed the support of 272 MPs, which, in the end, she did not have. Similarly she had gone to Rashtrapati Bhavan in May 2004 in the hope of becoming the Prime Minister. It was only after she came out from there did she say that she did not want to be the Prime Minister. Did she tell the nation what transpired inside in her conversation?

Even now, when attempts are being made to anoint her as a saint, please look carefully into the circumstances under which she was forced to resign. It was the fear of being disqualified as she was holding an office of profit. Why did she not resign earlier on her own when Jaya Bachchan issue had come up? The problem is that common people are being swayed by the media campaign, and efforts are being made to project this woman of foreign origin as a tall leader, but the reality is otherwise.

Nagendar Sharma: Uma Bharti, you have announced the launch of a new party on April 30. What does the new party plan to do?

Uma Bharti : On April 30, in Varanasi, we would like all those who firmly believe in the ideology of Deen Dayal Upadhyay to come and join hands with us in the launch of a new party. Based on our basic principles, I am confident that in 10 years' time we would be peaking and would be on the centre-stage of Indian politics. Those who have given up the party ideology would be wiped out from politics. The new party would have no hesitation in forging an alliance with those who believe and respect our principles.

'Some Parties Have Tried To Communalise Our Foreign Policy'