From Bullets To Ballots

Tarun Gogoi's Congress government is formed with support from the BBPF-H whose leadership comprises principally of surrendered militants of the Bodo Liberation Tigers. Violent times are foreseen in the troubled Bodo politics.. 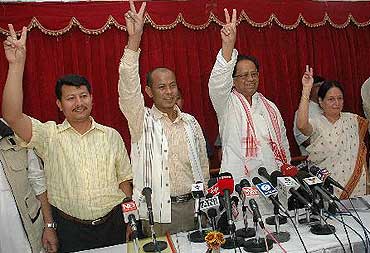 The election results of May 11, 2006, brought in new, though not unanticipated, power players into Assam’s Legislative Assembly, and, if their current demands are even partially met, possibly into the state’s government. The same players, moreover, who were, not long ago, designated as terrorists, and had relentlessly waged war against the state and the democracy that has now catapulted them into the arguable position of ‘kingmakers’.

The Hagrama Mohilary faction of the Bodo People’s Progressive Front (BBPF-H), with its leadership comprising principally of surrendered militants of the Bodo Liberation Tigers (BLT), secured an overwhelming victory in the Bodo Territorial Council (BTC) areas, capturing 12 out of the 18 seats it contested in the 126-member Assam Assembly.

The centrality of this victory is underlined by the fact that Chief Minister Tarun Gogoi’s Congress party has returned to power with drastically reduced margins, and just 53 seats in the Assembly, well below the halfway mark, making it dependent on BBPF’s support to form a government. Cashing in on this dependency, the BBPF has demanded its pound of flesh, demanding at least four ministerial berths and the post of a deputy Chief Minister in the new Government.

The BBPF-H’s arch-rival, the Rabiram Narzary faction, BBPF-R, also won a solitary seat from Tamulpur. The Assembly election results, in combination with the outcome of the May 2005 elections to the BTC, put the BBPF-H in firm control of the Bodoland Territorial Council (BTC) areas, and of Bodo politics, raising piquant questions, not only of legitimacy and moral authority, of the policy of creating autonomous areas and councils under pressure from violent political groupings, but more urgently, regarding the ongoing talks with the other Bodo militant group, the National Democratic Front of Bodoland (NDFB), that is currently negotiating the terms of its ‘return to mainstream politics’ with the Centre.

The policy of satisfying militant demands through the establishment of autonomous councils has failed repeatedly in redressing public grievances and meeting popular aspirations in the Northeast and is failing yet again in Assam’s Bodo dominated areas. The war of attrition between former brothers in arms, the BLT and the All Bodo Students’ Union (ABSU), has ensured that the objective of providing good governance to the Bodo population through the arrangements enshrined in the Sixth Schedule of the Indian Constitution has again fallen prey to the political ambitions of factional leaders. This schism has, moreover, created enough space for the NDFB – currently operating under a ceasefire agreement with the government – to reclaim its position among the sections of the Bodo population.

The formation of the BTC on December 7, 2003, had brought an end to the three-year dialogue process between the BLT and the government of India and raised fresh hopes that good governance, now to be administered by the Bodos themselves, would keep militant and secessionist tendencies at bay. The BTC, in fact, was a repetition of a similar experiment in 1993, which went awry. Following the first Bodo Accord of 1993, a Bodoland Autonomous Council (BAC) had been established, but that hurriedly signed accord faltered on various counts, the most significant being the absence of a clear-cut geographical boundary for the BAC, which led eventually to its denunciation by the Bodo groups who were initially parties to the Agreement.

With the failure of the BAC, the ‘statehood’ demand was once again revived by a new brand of militancy led by the BLT, which scorched the Bodo heartland of Assam. The violence diminished, however, after the BLT declared a unilateral ceasefire in July 1999 in response to the union government’s appeal for talks. After a series of negotiations, the BLT gave up the demand for a separate Bodoland state on October 2, 2001, and reconciled themselves to political-administrative arrangements for autonomy under the Sixth Schedule.

The successful end to the negotiations witnessed one of the largest surrender ceremonies in the country on December 6, 2003, when 2,641 BLT militants bade farewell to arms at Kokrajhar town. A 12-member interim BTC, led by the former ‘chief’ of the now disbanded BLT, Hagrama Mohilary, was constituted at Kokrajhar, but the rehabilitation of surrendered BLT cadres remained a difficult task. Indeed, about half of them had already been recruited into the paramilitary forces (Central Reserve Police Force - 339, Border Security Force - 300, Assam Rifles- 150, and another 400 as Special Police Officers) as a part of the Agreement reached on the eve of the formation of the Council. However, failure to provide compensation packages to the remaining surrendered cadres continues to rankle.

The Council had tremendous challenges before it. However, cooperation between the BLT and the ABSU was seen as sufficient to tide over such challenges. There was also the challenge of the non-Bodos who, under the Sanmilita Jana Gosthiya Sangram Samity (SJSS), an amalgam of 18 non-Bodo organizations, spearheaded an agitation against the BTC. In addition, there was a funds crunch that affected the timely implementation of development projects. Power, however, remained a great cohesive force for some time, giving Mohilary, the BTC chief executive, the confidence to claim, on June 2, 2005, that he would ‘change the fate’ of the Bodoland in three years time.

The NDFB, however, remains an abiding challenge to the political arrangement arrived at with the BLT. Differences between the NDFB and former BLT leaders and cadres have resulted in a continuous stream of fratricidal clashes, despite the ‘disarming’ of the latter, and the ‘ceasefire’ with the former. On December 6, 2003, the NDFB had specifically opposed the formation of the BTC, terming it as an exercise in futility and warning people that this was a move against the interests of the Bodo community. An NDFB statement issued to the local media declared: "The creation of the council was an exercise in futility and will go down in history as the day a group of opportunists surrendered the Bodo dream before New Delhi."

As expected, elections to the Council were not held in time, and when held, on May 13, 2005, were marred by violence, with at least one person killed and another 26 injured in poll-related clashes.

The high hopes of the Bodos following the formation of the BTC were quickly shattered when former BLT leaders fell out with the former leaders of the ABSU in their bid to control Bodo politics. The nascent Bodo People’s Progressive Front (BBPF), formed at Kokrajhar on April 12, 2005, at the behest of the ABSU and former BLT militants, underwent a sudden split on the eve of the Council elections. The divide in the BPPF came mainly as a result of Mohilary’s support to some former militant comrades who had contested Council elections as independent candidates against official candidates of the BBPF. Manoj Kumar Brahma, one of Mahilary’s close confidents, for instance, was pitted against Rabiram Narzary, the founding president of the BPPF, at Banargaon. Nevertheless, on June 2, 2005, an 11-member Executive Council headed by Mahilary was sworn in at Kokrajhar, to run the 46-member BTC.

Post-poll violence continued to rock the Bodo heartland with two rival BPPF factions engaged in violent clashes – attacking villages, torching houses and indulging in vandalism. A sampling of some of the incidents in the month of April in the current year alone provides an index of the relentless strife:

April 28: Unidentified miscreants shot at and injured a village headman and his wife at Mahendrapur village in the Kokrajhar district. The BPPF-R accused the BPPF-H for the attack.

April 19: BPPF-R called a 12-hour Kokrajhar District bandh (shut down) in protest against the District administration’s failure to maintain law and order after the killing of Lwithwma Borgoyari, a schoolteacher and former adviser to the ABSU, on April 9.

April 17: All Bodo Women’s Welfare Federation (ABWWF) called a 12-hour Assam bandh in protest against the alleged assault on its president, Kanan Basumatary, by miscreants suspected to be the supporters of the BPPF-R at Kokrajhar on April 9.

April 14: A youth was lynched at Kalaigaon in the Udalguri District. The BPPF-H held the BPPF-R responsible for the assault.

April 12: Four houses were set ablaze at Chetnaguri and Hasraobari in the Kokrajhar District.

April 9: Unidentified assailants brutally hacked to death Lwithwma Borgoyari, a school teacher who was also an adviser of the Simbargaon unit of the ABSU, at Hetnaguri in the Kokrajhar District.

The split in the BPPF and subsequent clashes between the supporters of the two factions have been a boon for the NDFB, which has consolidated its lost position among the Bodos. Its ceasefire with the government has also raised hopes that the outfit might be able to secure a better deal than the present BTC – though it is difficult to see what more the government could offer. When the NDFB signed the ceasefire agreement with the union and state governments on May 25, 2005, there was jubilation within a large section of the Bodo community. However, the proposed negotiations are expected to be difficult, since the outfit is yet to give up its original demand for a sovereign state of Bodoland.

Ominously, the BPPF-R is now entering into what appears to be a stable alliance with the NDFB. The formation of the Bodoland People’s Progressive Youth Front and the Bodoland People’s Progressive Women’s Front by the BPPF (Hagrama Mohilary faction) on January 28, 2006, was widely perceived as a reaction to the BPPF-R announcement that it would go for an electoral understanding with the NDFB in the then scheduled Assam State Assembly elections. Declaring his affiliation to the NDFB on the eve of the elections, Rabiram Narzary stated: "The NDFB also needs candidates to air their views. They can back some of their chosen ones. There are options open for an understanding with them." However, he said his party did not want to use the NDFB as a means to ensure victory.

With the BPPF having secured dominance in the BLT and now gaining a stranglehold in the governing coalition at Guwahati, its power in Bodo politics will be difficult to challenge for the next five years. Other political formations will, consequently, be increasingly tempted to violence to undermine this influence, even as the government will have little to offer the surviving Bodo militant group, the NDFB, to secure its return to democratic politics. The divisions within Bodo politics are violent and wide, and appear destined to become more so in the foreseeable future.