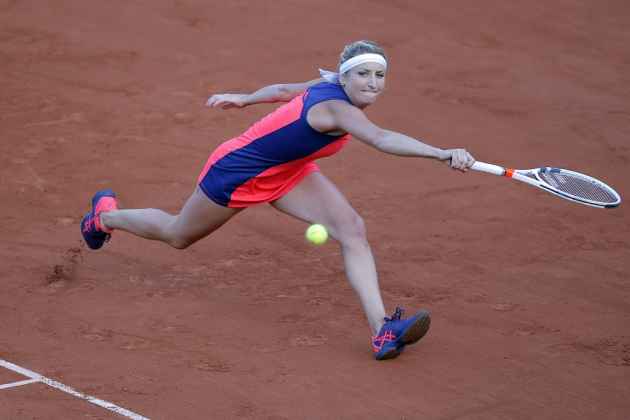 On a rainy day at the French Open, Timea Bacsinszky, the 30th seed Swiss, reached the women’s semi-finals with a 6-4, 6-4 win over local 13th seed Kristina Mladenovic. It is the second time that Bacsinszky has made it to the semis here. The 27-year-old player will now play unseeded Latvian Jelena Ostapenko, who stunned Danish 11th seed Caroline Wozniacki 4-6, 6-2, 6-2 for a place in the semi-finals.

“I feel extremely privileged to be in a second semi-final at Roland Garros,” said Bacsinszky, who lost to Serena Williams in the semi-finals two years ago.

“It was extremely difficult today. There was fine weather, then rain, wind and the clay was blowing in our eyes. I had to stay concentrated. I am sorry for the crowd but happy for me.”

With rains affecting the schedule on Tuesday, several matches were postponed and rescheduled. These included a quarter-final match between fourth seeded Rafael Nadal of Spain and his 20th seed compatriot Pablo Carreno Busta. The other quarter-final between second seed Novak Djokovic of Serbia and sixth seed Dominic Thiem of Austria was also deferred to Wednesday.

In the mixed-doubles semi-finals on Wednesday, seventh seeds Rohan Bopanna of India and Gabriela Dabrowski of Canada will take on third seeds Andrea Hlavackova of Czech Republic and Edouard Roger-Vasselin of France.