The argument has been put forward that 'innocent Muslims' are being targeted in the spate of recent arrests – but no evidence has, at any point, been cited, to support the thesis, other than an undercurrent of sustained denigration of the Police. 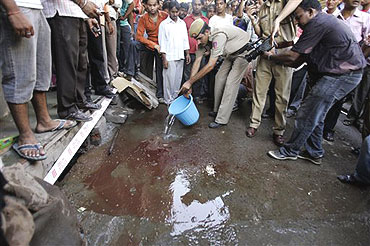 Exactly two weeks after the September 13, 2008, serial attacks at crowded market locations in Delhi, once again on a Saturday, terrorists struck the national capital on September 27, killing one and injuring over 20. The intensity of the explosion, this time around, was lower, and the ‘tiffin bomb’ – packed in a plastic bag – was simply tossed off a motorcycle in the Phool Walon ki Sair flower market at Mehrauli in South Delhi.

The intervening two weeks had seen frenetic activity in the intelligence and security establishment across the country, as much of the Students Islamic Movement of India (SIMI) and its front, the Indian Mujahiddeen (IM), network unravelled, with the killing of two SIMI-IM cadres in Delhi and the arrest of several others in Delhi, Mumbai and Uttar Pradesh, building on significant detentions in Gujarat (which had followed the serial explosions in Ahmedabad on July 26, 2008).

Exaggerated (and often distorted) reportage by a hysterical media on the Delhi encounter and the arrests across the country had created the irrational expectation that the spate of arrests and the ‘neutralisation’ of the SIMI-IM network would somehow spell the end of the succession of terrorist attacks that had been inflicted at apparently diminishing intervals over the past months and years – but the flower market blast has, unsurprisingly, put paid to that rather quickly. Investigators are still to identify the perpetrators of the latest blast, but it should be abundantly clear that, despite the body blows inflicted on the SIMI-IM networks, this organisation’s capacities are yet to be entirely extinguished. Moreover, the various other Pakistan-backed Islamist terrorist groups that have operated – individually and in tandem, often with SIMI – over the past years, to execute numerous terrorist attacks across India, show no signs of any significant decline in capacities or loss of support from their state sponsors in the neighbourhood – Pakistan and Bangladesh. Under the circumstances, there is little reason to believe that recent Police successes will have any permanent impact on the ongoing Islamist terrorist campaign across India.

It must be evident, consequently, that the question of containment of the threat and the creation of necessary counter-terrorism capacities must remain at the forefront of all policy discourse. It is, in some measure, gratifying that the debate at the Centre in the aftermath of the September 13 Delhi bombings – polarized and incoherent as it no doubt substantially remained – is beginning to show some signs of urgency. Prime Minister Manmohan Singh has conceded that there are "still vast gaps in intelligence", and this observation was followed, on September 17, by a Cabinet decision to augment the Intelligence Bureau’s (IB’s) strength by an additional 6,000 personnel. The IB was also tasked to set up a new ‘Research and Technology Wing’ dedicated to the continuous monitoring and analysis of patterns of terrorist activities and responses.

At the same time, significant augmentation of capacities was disclosed for the Delhi Police as well. The Home Secretary revealed that recruitment for 5,000 posts sanctioned earlier was ongoing, and an additional 7,612 posts in the Force had also received sanction. Further, plans to install a network of closed circuit television (CCTV) cameras in markets and at various border checkposts, and a centralised database with face recognition software, under the Delhi Police were also outlined, even as the projected augmentation of transport and communications capabilities was announced.

It remains to be seen, of course, whether, in what measure and within what timeframe these decisions are actually implemented. Crucially, however, as has been repeatedly emphasised in the past, the idea that terrorism can be contained at its points of delivery, or that India’s cities can be protected even while its ‘hinterland’ – the vast rural and mofussil areas – remain lawless and un-policed, is fundamentally flawed. The success of the national counter-terrorism effort will depend not only on high measures of efficiency (themselves far from realisation) at Delhi or in a handful of metropolises, but in a reformation of the policing and intelligence systems across the country. Processes to secure this objective have, however, yet to begin, and most states simply lack the political and administrative capability and – perhaps more crucially – integrity and intent, to take up the tasks of counter-terrorist capacity building with any degree of seriousness or urgency.

Even more dangerous, however, is the evidence of increasing communalisation, exceptionalism and a deeply destructive political dynamic that is progressively crystallizing around the discourse on Islamist terrorism across political parties, sections of the media, and the country at large. Among the principal objectives of irregular warfare, Mao Tse Tung notes, is the "destruction of the unity of the enemy". Terrorists targeting India, it is ever more evident, require very little effort to secure this objective, as political leaderships and social elites engage in an increasingly perverse debate on particular terrorist acts and state responses, or on the issueof terrorism in general.

It is, for instance, a matter of tremendous concern that an encounter in broad daylight, in the crowded Batla House locality of Jamia Nagar in South Delhi, and in which one Policemen – the leader of the raiding party, Inspector M.C. Sharma – was killed in the exchange of fire, and another was injured, should provoke significant scepticism not only among people in the immediate neighbourhood where the shootout occurred, but in a much wider constituency among political parties, the media and what passes for India’s ‘intelligentsia’. This is an index, equally, of the degree of communal polarisation, particularly in ghettoised neighbourhoods, as of the loss of confidence in the Police, especially among members of minority groups. Some human rights organisations, in a knee-jerk reflex, raised the bogey of a ‘staged encounter’, while the All India Minority Forum has called for a judicial inquiry into the killings. Other communal leaders and some political parties have jumped on to the bandwagon, perhaps cynically seeing an opportunity for some harvesting of votes or support through the adoption of partisan and extreme postures.

The argument has been put forward that ‘innocent Muslims’ are being targeted in the spate of recent arrests – but no evidence has, at any point, been cited, to support the thesis, other than an undercurrent of sustained denigration of the Police. Crucially, the responses of enforcement agencies are increasingly being held hostage to an irrational media backlash that follows both the failure to act and effective action. There has been a constant clamour about investigative failures to solve the major terrorist attacks over the past over two years. But when a case is actually solved, there is immediate and unverified uproar over the ‘targeting of innocent Muslims’, and altogether bizarre conspiracy theories abound. Worse, it is more than evident that enforcement agencies in India have simply failed to acquire the skills and acumen necessary to deal with the intrusive, increasingly frenzied, and overwhelmingly ignorant media, and this has only further fed a rising panic in public perceptions. The institutional paralysis is deepened manifold by opportunistic and unprincipled political responses – variously based on tactics that seek mobilisation through appeasement or escalation of tensions between communities – as well as through strategic advocacy by a number of sympathetic communal formations.

There are grave dangers for the country’s future in this. The induced paralysis that afflicts our responses to a rapid succession of crises across the country has created vast spaces for the operation of anti-national forces – and Pakistan-backed Islamist terrorists are only one among these. Unless a minimal unity of purpose, across both parties and communities, is secured, India’s enemies will continue to succeed with increasing frequency against a fragmented people, polity and administration.

Yet Another Black Saturday