Ananya, one of the transgenders, told the media that they have placed their demand before the DGP, and wished to pray in the dress of their choice -- a saree. 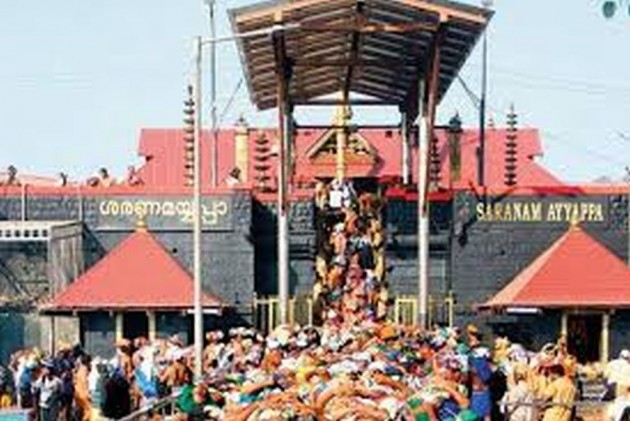 Four transgenders, who were denied permission to visit the Sabarimala temple a day ago, on Monday approached a Kerala High Court-appointed top police official Thiruvananthapuram and insisted they wanted to go to the shrine wearing sarees.

After meeting Director General of Police A. Hemachandran, Ananya told the media that they have placed their demand before the DGP, and wished to pray in the dress of their choice -- a saree.

"He (Hemachandran) has said he will check with the other two committee members and get back to us.

Transgenders on way to Sabarimala sent back by police

"We have insisted on the dress of our choice for the darshan -- to be allowed in saree when visiting the temple," said Ananya.

On Sunday, the Kerala Police on Sunday denied entry to four transgenders who came for a darshan to the Sabarimala temple.

The police first told them that if they changed into men's attire, they would be allowed. "First they said, we will not be allowed to visit the temple in the ladies dress and they asked us to change to a man's attire. Initially, we refused and after some time, we decided we will change, but the police changed their minds and asked us to return." said Ananya, one of the four transgenders.

However, later the police refused them permission to visit the Lord Ayyappa shrine.

Ananya said they were subjected to ridicules, threats and were asked to return by the police.

From there the team went and complained to the Kottayam Superintendent of Police, A. Harishankar.

On Monday, they arrived in the state capital to meet Hemachandran.

The Kerala High Court on November 27 had set up a three-member observer panel to oversee the Sabarimala pilgrimage season, after numerous complaints surfaced against the manner in which the police was acting in the temple town.

TThe state had witnessed massive protests by Lord Ayyappa devotees opposing the entry of girls and women of menstrual age into the Sabarimala temple since the Kerala government decided to implement a Supreme Court order permitting women of all age groups into the shrine.

Over a dozen women have so far made unsuccessful attempts to trek the holy hills due to furious protests by devotees and right wing groups.