A press release by the hospital said the condition of former CM of Tamil Nadu had a "transient setback" and his vitals are now normalising.

Hundreds of supporters gathered outside Chennai’s Kauvery Hospital where former Tamil Nadu Chief Minister M Karunanidhi is being treated, were asked to disperse after DMK leader A. Raja assured them the 94-year-old party patriarch was responding to treatment.

A press release by the hospital said the condition of former CM of Tamil Nadu had a "transient setback" in the evening today, and his vitals are now normalising.

"There was a transient setback in the clinical condition of DMK president M Karunanidhi. With active medical support, his vital signs are normalising. He continues to be closely monitored and treated by the panel of expert doctors," the medical bulletin said. 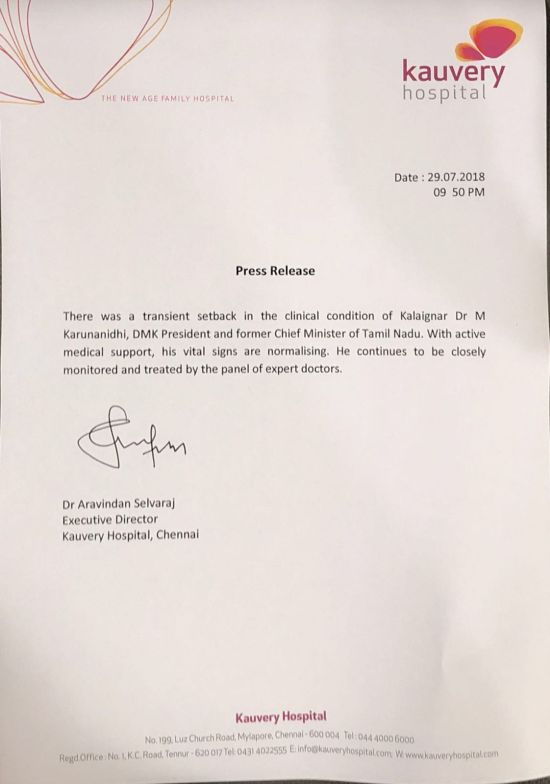 The 94-year-old DMK president, who is being treated for fever due to urinary tract infection, was admitted to the Intensive Care Unit (ICU) of Kauvery Hospital following a dip in his blood pressure.

His family and DMK leaders are presently at the hospital where he was admitted on Friday.

Earlier in the day, Vice President M Venkaiah Naidu visited the hospital to inquire about the health condition of the DMK chief.

"I came here on behalf of the TMC and Mamata Banerjee. I met M K Stalin and Kanimozhi and inquired about Karunanidhi's health," the TMC leader said.

Other than Naidu and Purohit, all other leaders met Karunanidhi's family members in the hospital and enquired about his health.