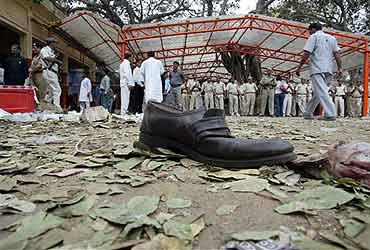 Were the circumstances not so tragic, it would have been easier to appreciate the farcical nature of the political and media responses to the latest Islamist terrorist outrage, this time the March 7, 2006, bombings at the ancient Sankat Mochan Temple and the Cantonment Railway station in Varanasi, at a site and in a city revered by the Hindus. There were, of course, the usual cries of intelligence and policing failure, with now-routine claims of ‘hard evidence’ of the attack having been received ‘months earlier’; political parties sought to muddy issues, communalizing the attack and blaming each other for ‘weak policies’ and administrative failure; a new Rath Yatra, seeking to revive the communal passions of the Babri Masjid-Ram Janmabhoomi mobilization of 1990-92, was announced by the architect of the original movement, former Deputy Prime Minister L.K. Advani, though it gained little support even within his own party; citing the earlier (failed) attack at Ayodhya on July 5, 2005, and the July 28, 2005, explosion on the Shramjeevi Express near Harpal Ganj, Jaunpur, poorly informed commentators fretted that Uttar Pradesh was the "new hub" of Islamist terrorism; even worse-informed were commentators who profoundly sought to link the attack to ‘geopolitical shifts’ in South Asia, and to President George Bush’s visit to Delhi and Islamabad the preceding week.

The truth is far less startling, though no less distressing. The attack at Varanasi is just the latest incident in a relentless campaign of subversion and terror engineered by Pakistan and its jihadi surrogates, which has systematically targeted vulnerable areas across the country over the years. Uttar Pradesh is, no doubt, a prominent target of this covert war – at least 41 incidents of Pakistan backed Islamist terrorism, subversion and the identification and neutralization of Islamist terrorist modules by intelligence and police agencies have been recorded over the period April 2001 – February 2006 in Uttar Pradesh alone. Uttar Pradesh is, however, just another point on the Pakistan-drafted jihadi map of India. Over the period January 2004 and March 11, 2006, for instance, at least 64 Pakistan-backed Islamist terrorist modules have been identified and neutralized across India, outside Jammu & Kashmir (J&K) and the Northeast; only 14 of these were in Uttar Pradesh.

The Varanasi blast was claimed by the ‘Lashkar-e-Qahhar’ (Army of the Vanquisher), but this is just a name, not an organization. As was the case, for instance, with the Al Faran, Tehrik-e-Shohda, Al Mansooran, Tehrik-e-Qisas, and dozens of other such ‘fronts’, these are put forward when the actual group responsible does not want to take public responsibility for a particular action; this is usually the case where civilian targets are attacked, especially when Pakistan is under increasing international pressure to curb the activities of terrorist groups – such as the Lashkar-e-Toiba (LeT), Jaish-e-Mohammed (JeM), Hizb-ul-Mujahideen (HM), etc., – that are widely known to be operating openly from its soil, and with state support. It is useful to recall that, after the Delhi blasts in October 2005, the Islami Inqilabi Mahaz (Islamic Revolutionary Front), a front organization of the LeT, had claimed responsibility. Similarly, an unknown group, which has not been heard of since, the Tehreek-e-Qisas (Movement for Retribution), claimed responsibility for the Akshardham attack in Gujarat on September 24, 2002. These fronts are projected only to enable Pakistan to maintain ‘deniability’ as it continues to host and support the actual or parent groups on its soil with impunity.

Despite several arrests and detentions, and the killing of a prominent terrorist of the LeT, Salar-ud-Din aka Salim at Lucknow a day after the Varanasi blasts, conclusive identification of the perpetrators of the Varanasi attacks is still to be made. There is sufficient circumstantial and trend evidence to suggest, however, that this attack has again been engineered by one of the Pakistan-backed terrorist groups operating in India. The most likely suspects are the Lashkar-e-Taiba (which has denied involvement, though this means little) and the Jaish-e-Mohammad, though some other groups – including local remnants of the banned Students’ Islamic Movement of India (SIMI) – may also be involved. The pattern of the attacks in Varanasi, including the nature of explosive devices used, also suggests links or a common source with the Delhi blasts, which were attributed to the LeT.

The Varanasi blasts were, no doubt, intended to provoke a communal polarization, and this is a natural objective for the Islamist terrorists, given their ideology as well as the history of the sub-continent. This is neither a new nor a recent tactic, and the objective in attacking temples is to provoke indiscriminate violence against Muslims. To the extent this happens, the terrorists could consider themselves successful. Since this has not happened in the wake of the Varanasi attacks, the jihadis have essentially failed, though the loss of life and the maiming of innocents leaves behind indelible scars.

Playing petty and vote bank politics over terrorist incidents and on issues relating to counter-terrorist policy is an unfortunate and continuous trend in India, and there is some evidence that several political formations seek to exploit the Varanasi incident for wider political and electoral mobilization. Such efforts can only work to the advantage of the terrorists and India’s enemies. Unfortunately, none of India’s political parties or leaders appears to have the stature or intellectual capacity to rise above such petty politicking. Unless at least some issues – including terrorism and counter-terrorist policy – are thought of as being national concerns and are put beyond the realm of partisan politics, the country will continue to suffer, and will remain vulnerable to manipulation by its enemies.

Over-thinking the proximate circumstances of each terrorist incident is not particularly productive from a policy perspective; what is required is a better understanding, as well as a comprehensive strategy to contain, the broader subversive design. It is the case that the terrorists gain only to the extent that their target societies concede their objectives. If Indians fall into the trap of indiscriminate communal retaliation, the jihadis and their state sponsors gain; if the Indian government makes concessions or alters its policies under pressure, the jihadis and their state sponsors gain. If India remains steadfast, however, the terrorists can achieve nothing, and this movement – indeed, Pakistan itself – will founder and disintegrate against the rock of the Indian resolve.

'Has The Pendulum Swung To The Other Extreme?'