'Focus On The Reforms Of Governance'

'The BJP-led NDA government did not lose the elections because of economic reforms. Nor was Hindutva the reason for their defeat. They lost since they failed in daily governance--they failed to improve the daily life of the common man.' 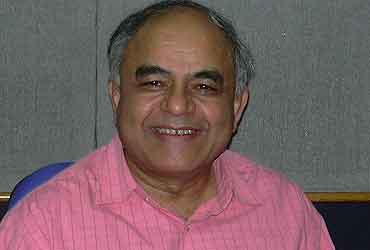 The full transcript of the BBC Hindi special programme Aapki Baat BBC Ke Saath -- with well known economist, columnist, former CEO of Procter & Gamble and author of India Unbound, Gurcharan Das. The topic for the programme was: Can poverty and unemployment be removed without economic reforms in India?

Nagendar Sharma: Is it possible to eliminate poverty and unemployment without economic reforms?

Gurcharan Das: On the contrary, I think the economic reforms are the solution to India's main problems of poverty and unemployment. Only by working hard on reforms can India beat its problems, there is no other solution in my view.

The BJP-led NDA government did not lose the elections because of economic reforms. Nor was Hindutva the reason for their defeat. They lost since they failed in daily governance--they failed to improve the daily life of the common man.

I will give you some of the reasons for defeat:  a rickshaw puller says he has to give 20 paise of every one rupee he earns to the policeman on the street; a housewife feels the pinch of rising prices every time she touches any article of daily use; a common man cannot even get an FIR lodged without paying money to the police; and when parents send their children to school, they come back and say there is a shortage of teachers. These are the issues that led to the defeat of Vajpayee government. It means nothing changed in the lives of common man's India.

BBC listener from Raipur: Mr Das, for the first time India has a Prime Minister who specialises in economic matters. Could we expect a change from the past and expect some good work in the country ?

Gurcharan Das: My feeling is not much is going to change. The process of economic reforms would continue with the slow elephant-like pace. So there would not be much change. There is talk about stopping disinvestment in sectors like oil--I think this is not important and does not matter a lot. If Dr Manmohan Singh is looking ahead and, to my mind, straight on the general elections of 2009, then he should focus on the reforms of governance. This simply means India does not need new policies, there are already a lot. What is required is implementation of existing policies, their execution. Governments change in India while life of the common man does not improve

Nagendar Sharma: Mr Das, you have watched Dr Manmohan Singh closely, what hopes do you have ?

Gurcharan Das: If I were Dr Singh, my top priorities would have been two. First and foremost, the agriculture sector, for which the blueprint in the country is ready, as I mentioned above. Second is education. I was shocked to learn that a probe report stated  that in BIMARU states, 30 percent of man-days are lost in rural schools as teachers do not turn up. And in 50 percent of schools there was no teaching at all. My view is that for the new government the most important portfolio would be the Human Resources Development (HRD).

BBC listener from Darbhanga: Mr Das, how would Dr Manmohan Singh go ahead with economic reforms with such a coalition of parties who do not agree on many issues. How would he fulfill the promises made by Sonia Gandhi to poor and rural people?

Gurcharan Das: You are right, it would not be easy for Dr Singh to run the government. But he has the example of Vajpayee government, which was a combination of about 24 parties and that government did proceed on the path of reforms. What is important is how Dr Manmohan Singh runs the government--this remains to be seen. He is a good man, but he is not a strong man. Let us see from where he gets the strength. What I know is Dr Manmohan Singh made history for India in the first three years when he was the Finance Minister, from 1991 to 1993.

Nagendar Sharma: But what path should Dr Manmohan Singh take in your view?

Gurcharan Das: There are two ways. First of all the major focus should be on daily execution. I repeat that India does not need new policies; we need the implementation and execution of the already existing ones. If Dr Singh could manage this, it would be a great work for the nation. He has to think about administrative reforms. Secondly, we should trust the economic reforms, which are the answer to one of India's biggest problem--corruption. Also, competitiveness is good for all.

BBC listener from Basti: Sir, the foreign exchange reserves are crossing the figure of hundred billion, but, on the other hand, those living Below Poverty Line are 35 percent. Employment growth rate is less than one percent and the unemployment rate is two and a half percent. Farmers are committing suicides and cars and air conditioners are being made cheap. Who are these economic reforms for? Can India be developed by 2020 ?

Gurcharan Das: I am moved by your question. The truth is poverty can only be removed through economic reforms. We need to understand the meaning of reforms. Take the Telecom Sector, for example. Till 1990, there were 50 lakh telephones in India. Today there are six and a half crore telephones in the country, and 20 lakh telephones are being added each month-- tell me, why was this not possible before reforms? So who has benefited out of this? The common man. His productivity has increased. Similar success can be achieved in power sector. What I mean to say is that the true meaning of reforms has to be understood. We need to have real reforms, which means more investment is required, which would yield more jobs for the educated unemployed.

BBC listener from Allahabad: Mr Gurcharan Das, it is a pleasure to talk to you--could you please explain why can't state governments in India take harsh fiscal measures, and why they revert to populist measures time and again? Jayalalitha has already started this, a week after a crushing defeat.

Gurcharan Das: I am really sad that the state governments of Tamil Nadu, Andhra and Punjab are either giving free power or are talking in terms of giving it free to farmers. I think that these governments can learn something from the past and utilise the same money for infrastructure development and schools, instead of such populist measures. Soon the governments taking such steps would become bankrupt--there would be no money left in the treasury, they won't even be able to pay their employees' salaries, and then they would learn. (Laughs) Actually this is the comedy of our country...

Nagendar Sharma: But Mr Das, Jayalalitha is reverting to populist measures after a rout in the Lok Sabha elections, in Andhra the Congress has won on populist slogans. Isn't it clear that it is the people who prefer populism?

Gurcharan Das: No, no not at all. See Jayalalitha lost because there was no improvement in the life of the common man. People of our country are not opposing reforms. What I am saying is life has become better in those sectors where reforms have taken place. Look at the Telecom sector for example--20 lakh new telephones are being added each month in India. The next key sector which can improve the lives of people of India is the power sector. The Electricity Act, 2002 has eased the generation and distribution of electricity, freeing it of governmental control--soon we would have more electricity, which means more industrialisation and more jobs for unemployed. But every sector, can't be privatised--policing would remain in the government sector. It is here where the centre and the states would have to work to instil a sense of confidence in the people. Therefore election victory or loss is decided by issues of daily governance, this is what I feel

BBC listener from Indore: I think that food is a strategic sector, it should be a priority--why should we be dependant on any country for this ? Do you think that countries like America and those in Europe would reduce agriculture subsidies for their farmers?

Gurcharan Das: Agriculture has to be the priority of India. The previous BJP-led NDA government had made all arrangements for reforms in the Agriculture sector. I feel that the challenge for Sharad Pawar, the new Agriculture Minister, is going to be immense. Focus would have to be shifting the investment from urban to rural areas, and this can only be done by changing the mindset of the Indian farmers. Stress should be on Agri-business, which would be done by increasing investment and would lead to more jobs.

Nagendar Sharma: But Mr Das who would invest in the rural areas ?

Gurcharan Das: This can be done by following the example of Punjab, where Captain Amrinder Singh's government has introduced contract farming. What needs to be done is to remove the land ceiling, as the land required would be a thousand acre and more. This would enable the farmer to give their land on a long term lease to an agricultural entrepreneur, who would invest in a big way. I feel that India is ready for a second Green Revolution, but before that reforms are required and for that the peasant mindset would have to be changed. We need to free the agriculture sector from government control, in the same way as was done with the Industry in 1991.

BBC listener from San Fransisco:  Mr Das, in your book India Unbound, there is a totally negative portrayal of states like Bihar and abuses for Laloo. Why can't the intellectuals use their power for something positive ?

Gurcharan Das: My friend I wish there could be some governance in Bihar. Look carefully what Laloo has done, the positive aspect is he has given a sense of pride and confidence to Yadavs and the middle castes, but, at the same time what about governance? Look at the condition of Bihar. I want to understand why do the people of Bihar elect Laloo's party every five years, without any improvement in their lives.

This Is What We Paid For