That's what a Kashmiri newspaper asked about the alleged "terror boat". It’s unlikely that the mystery will ever be investigated. Dirty tricks are played, not probed. 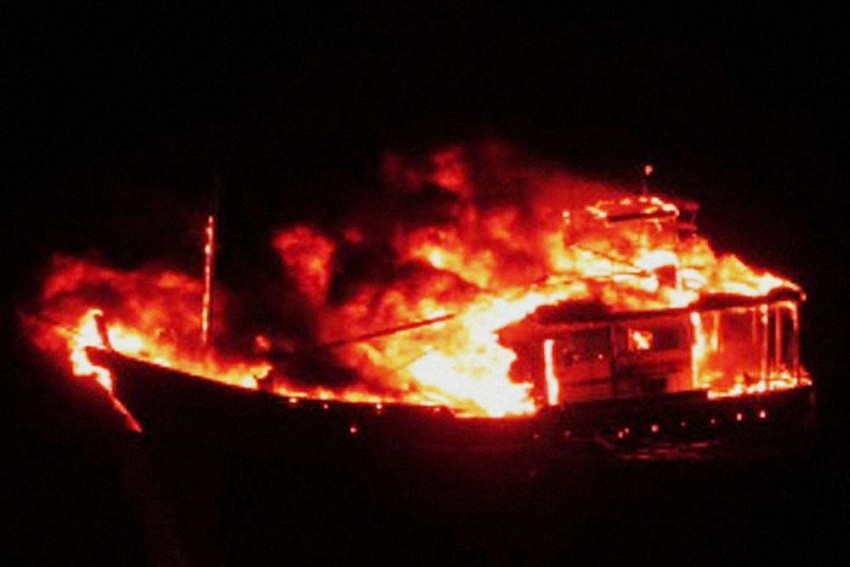 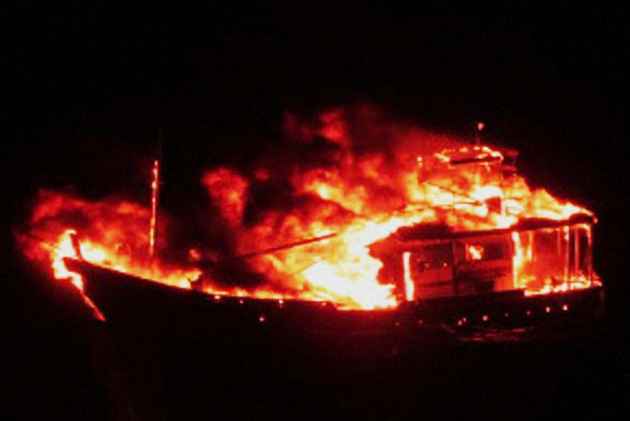 BJP president Amit Shah is ecstatic; proud of the security forces, the Coast Guard in particular, for foiling Pakistan’s alleged attempt to import terror via sea. And for scuttling a repeat of 26/11. The main opposition party, the Congress, smells a rat and demand a probe. "I will like to ask the Congress from where (do) they fight elections—India or Pakistan?” retorts Shah. In fact, BJP is using the capsized mysterious terror boat to raise its own political capital.

As is well-known by now, when the New Year 2015 dawned on the India, a Pakistani boat was intercepted by the Coast Guard off the coast of Gujarat on the basis of a specific intelligence input. The mysterious terror boat allegedly exploded and caught fire before sinking along with four occupants. The intelligence input was directly provided to the Coast Guard and the Indian Navy by the National Technical Research Organisation (NTRO)—the technical intelligence agency under the National Security Adviser (NSA) Ajit Doval. NTRO bypassed the Multi Agency Centre (MAC)—a coordination body that connects various security agencies with the mandate to streamlining the intelligence effort.

Or in other words, the NTRO didn’t share this intelligence input with India’s premier intelligence agencies: the IB and the RAW. The Gujarat government was also not taken into confidence.

The big question is: Why?

A former IB chief, Doval’s boss in the past, lists two possible reasons for it: One: too many cooks spoil the broth. Two: NTRO didn’t want many agencies in the picture and risk a leak.

Why it was particularly important to garb this operation—seemingly routine in nature—in secrecy is a matter of conjecture. The operation was carried out under the supervision of Ajit Doval, informs a disgruntled source in the IB.

There are political implications. “The BJP is desperate for an easy victory and is impatient to take credit,” says Dr Ajai Sahni, Executive Director of the Institute of Conflict Management. So much so that contradictions and loopholes punctuate the official version of sequences of events that night.

The Coast Guard claims there were explosives in the boat but there wasn’t any detonation before the burning boat went down. The Coast Guard claims they chased the boat for an hour, which is unlikely given the far superior speed of their boats compared to a small fishing trawler they were engaging with. The intelligence alert was for smuggling of contraband and not for terror activities, sources in the intelligence have clarified. Then there is speculation about another boat that escaped with two terror-handlers.

“The whole issue has taken the shape of an emotional discourse to appeal to the domestic constituency; it is not a strategic one about national security,” says Sahni. He adds, “Those who raise voice against this jingoism are more nationalist then those who perpetuate it.”

The sleuths of intelligence agencies agree with Sahni and not with Amit Shah’s diatribes. There were series of leaks contradicting the official version. Doval promptly issued a gag order, say sources in the IB, to quell the discordant voices emanating from within the intelligence apparatus. A couple of days ago, the new IB Chief Dineshwar Sharma had an informal chat with select scribes to inform them about the gag order.

“There is unrest amongst the various agencies. All want to share credit and medals,” agrees a Joint Director IB who interacted with this reporter before the gag-order was issued. But Doval is not the one who is seeking free publicity. “He is a silent operator. A hawk who keeps his nose on the grindstone,” he adds.

“What seems to be a successful operation to nab smugglers has become a huge credibility issue for India. The intelligence cannot be based on falsified information. India stands to lose face internationally,” cautions Sahni. The inclement weather on a clear, calm night is being used as justification for not procuring any corroborative evidences from the boat to substantiate their claim of possible terror attack. Now, many days later, reportedly, the Coast Guard has deployed a Dornier aircraft to hunt for the wreckage. The defence minister Manohar Parrikar offers conjectures instead of substantive proof. "I think they were suspected terrorists as they committed suicide, a normal boat even carrying drugs can surrender," he says and mentions “another boat” that couldn’t be apprehended as it “was in international waters on the other side." The fate of that other boat is anyone’s guess. Now the home minister Rajnath Singh reiterates: the Pakistani boat was on a terror mission. He gives no reason for his claim on this count.

So Outlook got in touch with some senior officials in the Coast Guard for some clarity on sequence of events that night. “We acted on specific intelligence,” says a senior officer posted in the headquarters in Delhi, “We apprehended the boat. Four on board decided to commit suicide. Where is the confusion?”

The whole episode should be looked at logically, explains another senior official who has led many such operations in the past. As per the standard operating procedure, he informs, the Coast Guard vessels don’t close on the suspected terror/smuggling boat as they can be engaged from a distance due to the superior and long-distance firepower. To avoid a potential hostage situation, even smaller Coast Guard boats are not sent near the targeted boat. “We just warn them twice, and if they fall in line, well and good, or we blow the damn thing,” he says.

Fishermen raise their arms and surrender; smugglers throw the contraband overboard and surrender. They are let off by the courts in the absence of any incriminating recoveries. It’s only terror-handlers who commit suicide, he explains, in consonance with the sentiment aired by Parrikar. Perhaps, he thinks loudly, they were in touch with the masterminds on Pakistani soil who advised them to lay down their lives and with them bury the terror conspiracy?

And why was the Indian Navy Ship not deployed since they, by their own admission, were kept in the loop? The senior Coast Guard functionary confesses that that Indian Navy carries an air of superiority on the high seas vis-à-vis Coast Guard, but squelches to add, “Do you think Indian Navy will send a warship to apprehend a fishing boat? The Coast Guard is meant for such operations.”

It’s unlikely that the " mysterious terror boat" will ever be investigated. Dirty tricks are played, not probed. For example it was never investigated who pumped bullets on S.A.R. Geelani in February 2005 after he was acquitted by the Delhi High Court, revoking his death sentence, in the Parliament Attack Case of 2001. He had, allegedly, blamed the IB under Doval for the attempt on his life.

Demanding an investigation on the mystery of terror boat is akin to treachery. Shah has said it in no uncertain terms: it should be the 'duty' of the Congress to boost the morale of the defence personnel instead of finding faults with NDA government's determined efforts to curb terror.

A Kashmiri newspaper, aptly so, raises a question: Are these fireworks for Obama?

The Passing Of Perin Chandra