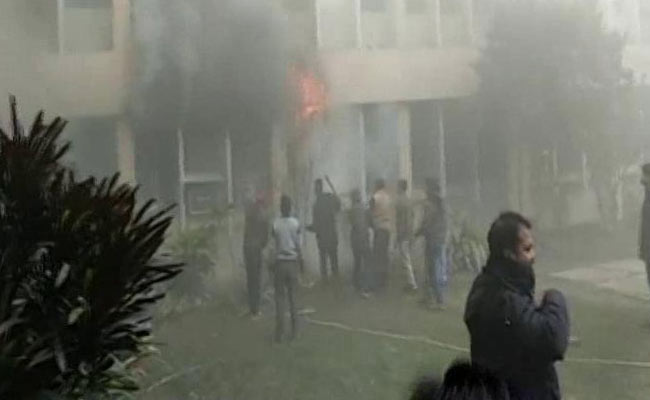 Crucial documents were feared destroyed as a major fire on Tuesday gutted the principal's office and an adjacent record room of the state-run BRD Hospital, the fire department said.

A fire broke out around 10 am at the state-run hospital, infamous for the deaths of scores of children last year allegedly due to shortage of oxygen, fire department officials said.

Six fire tenders were pressed to control the blaze that caused extensive damage to the principal's office and the adjacent records room in the hospital's administrative block, but no loss of life has been reported, officials said.

It took around an hour to control the fire, they said, adding that the cause of the blaze was not known so far.

The principal of the college, Dr Ganesh Kumar was on leave and not in the town.

Around 10 am the employees of the medical college noticed fire in the principal's office and soon it spread to the adjacent record room, officials said.

On getting the information, the fire service department sent six fire tenders which took around one hour to control the fire, they added.

Speaking on the condition of anonymity, a doctor of the college said, "The fire destroyed huge number of documents and the file related to oxygen case was also kept in the principal's office which I fear is destroyed."

SP North, Ganesh Saha, who reached the spot said, "Prima facie it seems that the fire was due to a short-circuit but the real reason will be revealed only after probe".

The chief fire service officer, DK Singh said, "A committee headed by me will find out the reasons behind the fire, the fire was controlled with an hour."

Meanwhile describing the fire as mysterious, SP district president Prahlad Yadav suspected that it was an act of sabotage to destroy vital documents related to the provision of oxygen to the hospital and files pertaining to short supply that led to deaths many children within a span of 24 to 48 hours.

The Baba Raghav Das Medical College had hit the headlines in August last year when 63 children, including infants, died within a span of four days when the supply of oxygen was allegedly disrupted due to non-payment of dues to the vendor.

The state government has, however, vehemently denied that shortage of oxygen led to the deaths.