Finally, Power To The People?

Nepal's King Gyanendra expresses his 'unflinching commitment towards constitutional monarchy and multiparty democracy' hands over 'executive power of the Kingdom of Nepal' to the people and calls on the opposition to name a candidate for PM.
Facebook Twitter Google + Linkedin Whatsapp
Follow Outlook India On 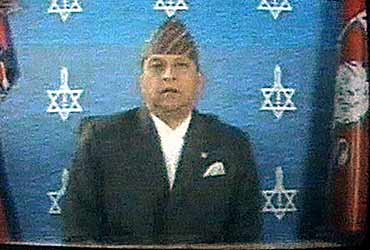 In what is bound to be seen as too little, too late, overt intervention by India resulted in some movement in a tense Nepal. A day after Prime Minister Manmohan Singh's special envoy Karan Singh advised the Nepal King to restore multi-party democracy and hold a dialogue with political parties, came this 10-minute address by a grim-faced monarch to his nation on the state-run Nepal Television. But as the king has not made any sounds on re-instatement of Parliament, or Constituent Assembly Elections, the minimum demanded by the opposition, Indian role is bound to come in for severe criticism. The opposition has made its disappointment known and vowed to continue with its protests. The CPM, in India, on its part, has characterised the king's offer as "a manoeuvre intended to retain effective powers, including control of the armed forces as per the old Constitution". That India was party to this ruse is how it is being seen in Nepal too, as the king's latest announcement begs the obvious question: Did India take the seven-party alliance on board on what the king went on to offer? Did the opposition have second thoughts only after the event, perhaps under pressure from the Maoists? Or was it not consulted at all?

Unofficial translation of the full text of the speech

You are all aware that given the situation prevailing in the country then, we were compelled to take the decision of 1 February 2005 to set in motion a meaningful exercise in multiparty democracy by activating all elected bodies, ensuring peace and security and a corruption-free good government through the collective wisdom, understanding and the united efforts of all the Nepalese.

By supporting our decision, the Nepalese people made amply clear their desire for peace and democracy and the civil servants demonstrated sincerity towards their duty. We are appreciative of this. We also have high regard for the dutifulness, valour and discipline displayed by the security personnel by upholding their glorious tradition.

By visiting different parts of the country we made honest endeavours to acquaint ourselves with the hopes and aspirations of our people, mitigate their hardships and boost their morale. We also called on the political parties to enter into a dialogue in the interest of the nation and the people afflicted by violence and terror. However, this did not materialise.

The ideals of democracy can only be realised through the active participation of political parties.

In keeping with the tradition of the Shah dynasty to reign in accordance with the popular will, in the greater interest of the nation and people and our unflinching commitment towards constitutional monarchy and multiparty democracy, we through this proclamation affirm that the executive power of the Kingdom of Nepal, which was in our safekeeping, shall from this day be returned to the people and the exercise according to Article 35 of the Constitution of the Kingdom of Nepal-1990.

As the source of sovereign authority is inherent in the people, harmony and understanding must be preserved in the interest of the nation and people in an environment of peace and security.

While safeguarding multiparty democracy, the nation must be taken ahead along the road to peace and prosperity by bringing into the democratic mainstream those who have deviated from the constitutional path. Similarly, a meaningful exercise in democracy must be ensured with the activation of representative bodies through elections as soon as possible.

We therefore call on the seven-party alliance to recommend a name for the post of the prime minister at the earliest for the constitution of a council of ministers which will bear the responsibility of governing the country in accordance with the Constitution of the Kingdom of Nepal-1990. The present Council of Ministers will continue to function until the appointment of the prime minister.

May Lord Pashupatinath bless us all.