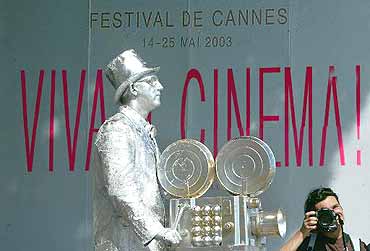 The Festival
After the Americans hosted a subdued Oscars, the French are ready with a glittering edition of the most celebrated film festival in the world. The Cannes Film Festival kicks off its 56th annual edition today with the remake of the 1952 classic Fanfan la Tulipe starring Penelope Cruz. 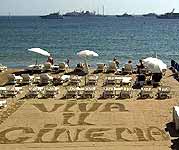 Apart from competition for the prestigious Palme d'or, the annual two-week event will be the venue for several global premières and star studded parties. The festival will be punctuated by events paying homage to the Italian master Federico Fellini, marking the ten-year anniversary of his death. Cannes 2003 will conclude with Charlie Chaplin's classic Modern Times. 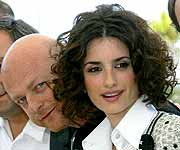 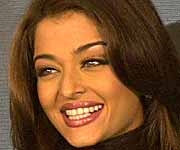 Malayalam filmmaker Murali Nair will be representing India once again with his film Arimpara (A Story that Begins at the End) being screened in the 'Un Certain Regard' section.' Nair's Marana Simhasanam (The Throne of Death) had won the Camera d'or award (given to a first-time director) at Cannes in 1999.

Eastwood's Mystic River, which stars Sean Penn, Tim Robbins and Kevin Bacon, is one of the more high-profile films vying for the prize. The shortlist also features Japanese director Kiyoshi Kurosawa who has entered Bright Future for the competition. Last year the Palme d'or went to Roman Polanski's The Pianist, the movie which got him the Oscar for best director. 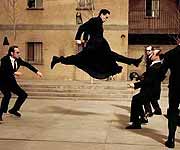 The 40 'out of  competition' screenings promise scorching action beginning with the world première of Wachowski brothers' much awaited Matrix Reloaded.  Lester James Peries also returns at the age of 84, with a film straight out of his native country of Sri Lanka -- Mansion by the Lake, inspired by the work of Anton Tchekov.

The last wish of the late Portuguese director Joao Cesar Monteiro to see his film presented in Cannes will be fulfilled at the screening of his film Vai e vem. Arnold Schwarzenegger will also be seen in Cannes promoting his comeback film, Terminator 3: Rise of the Machines.

20 films representing 13 countries are in competition for the Palme d'or: