And now comes the spin about "crushing burden of price-rise and galloping inflation". Left says in addition to the nuke deal, the support is being withdrawn "since the Congress led government is willfully disregarding the Common Minimum Programme". 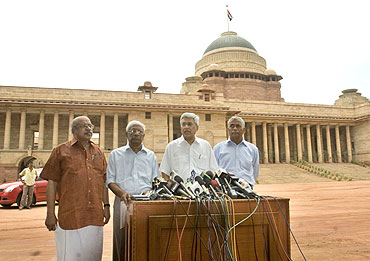 On Withdrawal of Support to the UPA government

The Left Parties have withdrawn support to the UPA government. The UPA government came into existence in 2004 with the support of the Left parties on the basis of its Common Minimum Programme. The aim was to fight the communal forces and undo the damage they had done to the secular polity of India in their years in office. This required a set of interlinked policies to bring relief to the people, to protect India’s integrity and to pursue an independent foreign policy. By going ahead with the deal at a time when there is the crushing burden of price-rise and galloping inflation, the Manmohan Singh government has clearly shown that it is more concerned about fulfilling its commitment to the Bush administration rather than meeting its commitment to the people of India.

The Indo-US Nuclear Deal is against India’s vital interests. The Congress-led government has embraced a strategic alliance with the United States. This dubious deal with President Bush is the centerpiece of a number of agreements like military collaboration and concessions to US capital in the retail sector, education etc.

The nuclear deal will not provide India energy security. Since it is anchored in a US law, the Hyde Act, it will hamper an independent foreign policy and restrict our strategic autonomy.

The Manmohan Singh government is guilty of gross violation of the Common Minimum Programme, which does not provide for a strategic alliance with the USA.

The Left parties cannot support such a course which is harmful for the people and the country’s sovereignty.

The Prime Minister has gone to the G-8 Summit in Japan and before meeting President Bush announced that the government will be going to the IAEA Board very soon. But nothing was told about this to the Left parties and the people. It has become evident to the whole country that we have a Prime Minister whose priority is to fulfill his commitments made to President Bush. The problems faced by the people and the country can wait.

The Congress leadership promised to ameliorate the conditions of the aam admi – the common people. After four years of the UPA government, the people are groaning under an unprecedented price rise. The prices of rice, wheat, edible oil, dal, vegetables and other essential commodities have all shot up. For example, between 2004 and 2008, the retail price of rice has increased by over 46 per cent, wheat by 62 per cent, mustard oil by 42 per cent, chana dal by 47 per cent and even salt by 42 per cent.

The government has increased the prices of petrol and diesel seven times in the last four years. Petrol has gone up between 2004 and 2008 by 50 per cent, diesel by 60 per cent and LPG by 58 per cent.

The government has refused the Left parties’ demands to:

By pursuing a neo-liberal agenda the Congress led government is following the same policies of the previous BJP government. These policies are squarely responsible for the distressing spectacle of agrarian crisis, farmers’ suicides, mass poverty, price rise and unemployment. This is in stark contrast to the obscene growth of billionaires and the superrich.

The Congress is determined to go ahead with a further rightwing shift in both foreign and domestic policies. This situation is providing fertile ground for the communal forces.

Since the Congress led government is wilfully disregarding the Common Minimum Programme, the Left parties have decided to withdraw support from such an anti-people government.

With the withdrawal of support by the Left parties, the government has lost its majority and legitimacy. The Prime Minister must face the Lok Sabha and seek a vote of confidence.