"We have told the Deputy Commissioner to send legal-aid for sensitization of the campus." 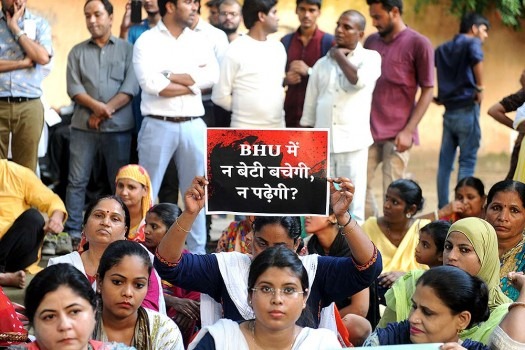 Addressing the media in Varanasi over the violence lashed in the university after alleged molestation of a varsity girl, the chairperson said, "We found eve-teasing is rampant in campus and even campus' boys have been involved in it. We have told the Deputy Commissioner to send legal-aid for sensitization of the campus."

Sharma's comments come a day after NCW began a probe into the September 23 baton-charge on protesting women students of BHU, who were demanding action in an alleged sexual harassment case.

Commenting over safety concerns of the students, she informed that special security cameras have been installed in the campus and high-tech ones will be installed soon.

Also, the SSP has been asked to deploy forces in the campus for few days, Sharma told.

Talking about instigation of violence on the campus, Sharma said, "There were many issues about which the girls wanted to talk peacefully but the protest took another turn when it was hijacked by outsiders."

Sharma said the NCW has asked the authorities to increase security near Naveen Hostel as the condition there is "terrible."

The NCW chairperson said, "A decision will be taken in a day or two over curfew timings in the hostels. And same timings will be announced for both the boys and girls."

Commenting over illegal stay at hostels, she said, "Few boys, not BHU students, are staying illegally in the hostels. We have asked girls to identify them. The list of the identified will be given to the SSP. They will be rounded up and will immediately be ousted from the campus and a legal action will also be taken against them."

Earlier the NCW chief had told the media that BHU Vice-Chancellor Girish Chandra Tripathi would be given a chance to express his side also, but today she said that the VC had not met her or picked up her calls.

"VC neither met me nor picked my calls. He'll be summoned to Delhi. He didn't play his part in controlling the situation," Sharma said.

Violence had erupted in the BHU campus after alleged September 21 incident, when a first-year female student of the university alleged that she was molested by three bike-borne men outside the campus.