A well-known fitness enthusiast, Cristiano Ronaldo set aside two Coca-Cola glass bottles which lay in front of him during a press conference 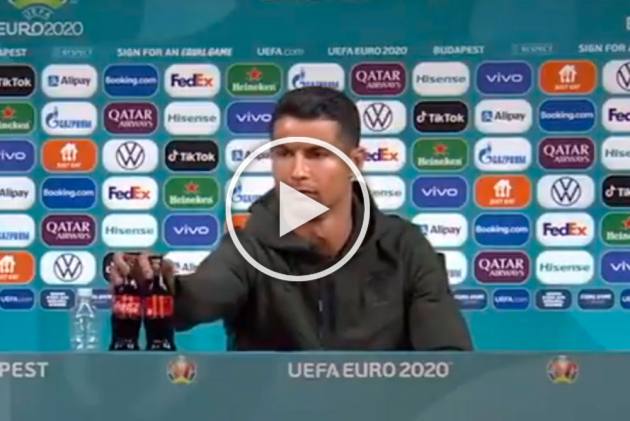 In a video that has since gone viral, the 36-year-old Juventus striker picked up a bottle of water instead saying "Agua!" in Portuguese, seemingly urging people to choose water over aerated drinks.

Cristiano Ronaldo was angry because they put Coca Cola in front of him at the Portugal press conference, instead of water! ðÂÂÂÂÂÂ

He moved them and said "Drink water" ðÂÂÂÂÂÂpic.twitter.com/U1aJg9PcXq

According to media reports, the share price of Coca-Cola, one of the official sponsors of Euro 2020, slipped from USD 56.10 to USD 55.22 almost immediately after Ronaldo's gesture.

The market valuation of Coca-Cola went from USD 242 billion to USD 238 billion, a fall of USD 4 billion

Reacting to the incident, Coca-Cola in a statement said "everyone is entitled to their drink preferences" with different "tastes and needs".

Ronaldo has spoken about his uneasiness with carbonated drinks earlier as well. In December last year, he had tweeted, ""My son has potential, We'll see if he will become a great footballer.

"Sometimes he drinks Coke and eats crisps and it irritates me."

Ronaldo went past France's Michel Platini to become the all-time top-scorer of the tournament as he scored a brace, leading his side to a 3-0 win over Hungary on Tuesday.

Defending champions Portugal will clash with Germany next on Saturday.

On Tuesday, France mid-fielder Paul Pogba removed a bottle of Heineken beer that had been placed in front of him at a press conference.

Pogba, a practising Muslim, removed the bottle when he sat down to speak to the media after his side's 1-0 win over Germany.