The priority for Arsenal this season remains a top-four finish and a return to the Champions League rather than a title challenge, and Emery is well on course for that goal. 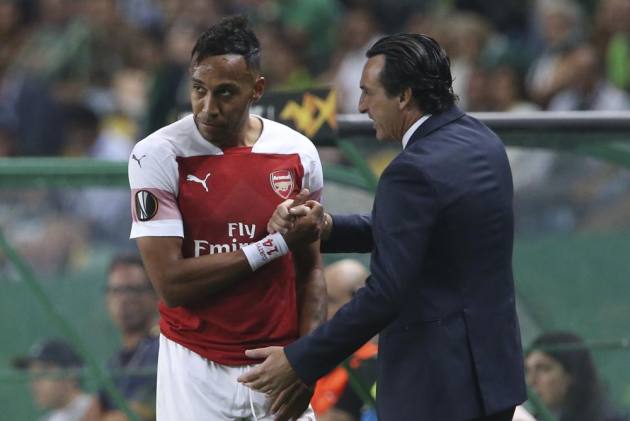 This is what the so-called test of fire looks like for Arsenal. Liverpool, second in the table after 10 rounds and with a firepower strong enough to dismantle any football fortress in the continent, will not only try to end the Gunners' unbeaten run of 13 games but also demoralise one of the traditional forces in England.

Despite getting an unforgiving fixture as Arsenal's new manager in nearly a quarter of a century, Unai Emery has quickly put defeats to Manchester City and Chelsea behind him with a 13-game unbeaten run to earn the respect of the Gunners' support.

However, the real test of how far Emery's Arsenal have evolved since being outclassed by City on the opening weekend of the season comes when they host Liverpool at the Emirates.

Arsenal have won 12 of those 13 games unbeaten, the only slip coming at Crystal Palace last weekend when they conceded two penalties in a 2-2 draw.

Yet, they haven't faced any of the Premier League's top six from last season in that run, with defeats of Watford and Everton their only victories over sides in the top half of the table.

Emery still seems to be searching for the right balance, while also getting two-star centre-forwards in Alexandre Lacazette and Pierre-Emerick Aubameyang into the side.

Lacazette and Aubameyang have already combined for 14 goals between them this season and their firepower has so far got Arsenal out of trouble, particularly late in games with Emery's men yet to enjoy a half-time lead in the Premier League.

It is to Emery's credit that his changes have often impacted the game positively for his side, and that Arsenal only trail league leaders City and Liverpool by four points heading into this weekend.

The priority for Arsenal this season remains a top-four finish and a return to the Champions League rather than a title challenge, and Emery is well on course for that goal.

However, the Spaniard can look to his opponents this weekend for inspiration in what Arsenal could look like as the finished product.

Jurgen Klopp has taken almost three years to find the right blend between attack and defence despite reaching two European finals with Liverpool, one of which he lost to Emery's Sevilla in the Europa League two years ago.

Until now, a realistic tilt at the title has been undermined by defensive deficiencies.

In this fixture last season, Liverpool blew a two-goal lead by conceding three times in five minutes in a thrilling 3-3 draw.

One of the major culprits for Liverpool's collapse that night, goalkeeper Simon Mignolet, has played just two Premier League games for the club since, while within weeks Virgil van Dijk was bought for a world record fee for a defender.

To have any chance of keeping pace with City in the quest for Liverpool's first Premier League title for nearly three decades, Klopp needed to drastically improve results on the road against top six opposition.

That point at the Emirates as good as it got against the Premier League elite last season. In total Liverpool conceded 15 goals in five games and were beaten at City, Manchester United, Tottenham and Chelsea.

Already there has been an upturn in fortunes with victory at Spurs last month and Daniel Sturridge's stunning late strike earning a well-deserved point at Chelsea.
Unfortunately for Liverpool, City show no sign of letting up.

They too won at Spurs on Monday, held Liverpool at Anfield last month and outclassed Arsenal in a baptism of fire for Emery on the first weekend of the season.

In most other seasons, a point at a rejuvenated Arsenal would be seen as a good result, but in trying to just keep pace with City, Liverpool need another statement win on Saturday.