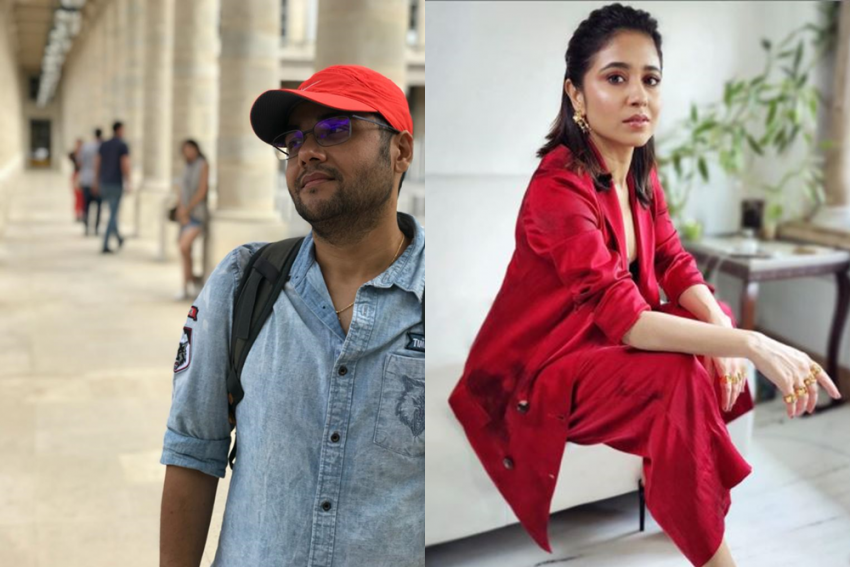 With various writing credits to his name including Chhichhore, Dangal, and Gunjan Saxena: The Kargil Girl, Nikhil Mehrotra’s craft to extract situational humour under any circumstances was never in doubt. Laghushanka, a short film, marks his directorial debut. He flawlessly uses his character and her problem to make a point.

After ‘Masan,’ ‘Gone Kesh’, the second installment of ‘Mirzapur 2’, Shweta continues her knack for shining in movies with unusual and meaningful narratives. In an exclusive interview with Nikhil Mehrotra and Shweta Tripathi, we get to know what went behind making ‘Laghushanka’.

“Laghushanka in English means a toilet and the central character in the movie depicts the story of a girl who has a problem with bed-wetting. However, if you’ll see the usage of the term on our poster, you’ll realise that we have separated the two words – Laghu which means small, and shanka which means doubt. So, we are portraying that doubt through the protagonist is in two minds if she should tell her would-be husband about her problem,” Nikhil shares while talking about choosing the title Laghu-Shanka for the movie.

Shweta believes that the biggest USPs of being an actor is that you get to live the life of several characters in one life. “I have never experienced the problem of bed-wetting in my life and when I got to know about Shruti’s character, I saw the world from her eyes – where everyone is bullying her, making fun of her because of a condition she has no control over. And later how it becomes such a big issue as she has to get married. The idea of being perfect in every department is not quite possible – life is not like that. I feel that one should appreciate each other. We all have flaws and accepting that is important.”

For Nikhil, Shweta was an obvious choice. He tells us, “For some reason, this concept came to my mind, the only person I could visualise for the character was Shweta. When I fleshed it out and wrote it, the feeling became stronger. Shruti is innocent and naïve, I felt Shweta could bring that out naturally. I’m so glad to see how things have turned out.”

Laghushanka, Shweta tells us “is all about a story that has to be told.”

She adds, “Through entertainment, we’ve tried to make people understand and realise the importance of truth in a relationship and accepting people with flaws. It totally depends on the viewers to now interpret it.”

However, for Nikhil, it would be an achievement if people understand the message. “I think people would be welcoming to discuss the issue and if they are not, I would want the movie to make the difference. Honestly speaking, the intention behind the movie was about addressing the issue and breaking the stereotype. I have known a person who’s had this condition and recovered from it. The story is close to my heart and if leads to a conversation around it – it will be a big achievement for me.”

Both Shweta and Nikhil see OTT Platforms as a game-changer, not only for new actors and directors but also for consumers. Nikhil says, “OTT platforms are definitely a game-changer. The films and series on these platforms have exposed us to such amazing content and we have to match that. It is visible to a certain extent in series like Patal Lok, Scam 1992 – these are different and have never been created in our country. The audience is expecting more such content and this gives a chance to explore more.”

“OTT platforms are easily available. The biggest plus point is you can access them on the go and if you don’t like what you are seeing, you can switch it off or move on to the other option. The content is across the globe, you can pick and choose. The content is better – women are being portrayed in a better way. Everything has become so real with OTT platforms,” adds Shweta.

Shweta will also be seen in the much-awaited series Mirzapur 2. Expressing her happiness, she tells us, “Season 2 is going to be double dhamaal. I am so happy to play Golu – one of the most complex characters in the series. When I look at Mirzapur – I don’t see myself but my character Golu. I would want people to see beyond the violence, beyond the guns – Mirzapur 2 is all about relationships.”

“I wish to make a difference with my work,” she concludes.

Both for Shweta and Nikhil, the journey in the industry so far has been beautiful and the willingness to explore more is in them. Shweta says, “The journey has been beautiful and I credit all of it to the people I’ve worked with. You won’t believe but I haven’t seen any of the work I’ve been a part of. My work is like my report card and I am very content with it. I am blessed to be able to experiment with so many characters.”

While Nikhil believes that he has just started and cannot call his career a journey.

“There’s a lot more that I have to cover – can’t call it my journey, but I feel lucky to be a part of some great movies. Films have had a very important position in my life – it was something that attracted me both in my good and bad times. The school was about watching each and every film that used to come on television. There was some connection, I believe. I don’t know what this is, but I was never able to leave the connection with films behind. While working for an advertising company, I used to come back and watch movies. I started discovering international cinema and that is where I realised that this is what I want to do. When I watched Lagaan in the theatre, I was mesmerised to see that a film on such a brilliant topic can be made. This was preparing me and when I met my boss, he guided me to another extend. With Bhootnath Returns featuring Amitabh Bachchan, the game changed for me, and got to work in more and more movies. I started observing people and their lives and that reflects a lot in my writing.”