Sonam Kapoor shared a news clipping on Instagram which stated that nothing was recovered from Shah Rukh Khan's son Aryan Khan when he was detained by the NCB on October 2.

Bollywood actress Sonam Kapoor has become the recent celebrity from the film industry to have come out in support of Shah Rukh Khan, amidst Aryan Khan’s arrest by the Narcotics Control Bureau (NCB) on October 3, after she shared a cryptic post on Instagram, on Wednesday.

In her story, she shared a link of an article related to the case wherein it is reportedly told by the Court that the star kid wasn’t on the cruise ship when he was arrested and nothing was found on the star-kid at the time of arrest, either. 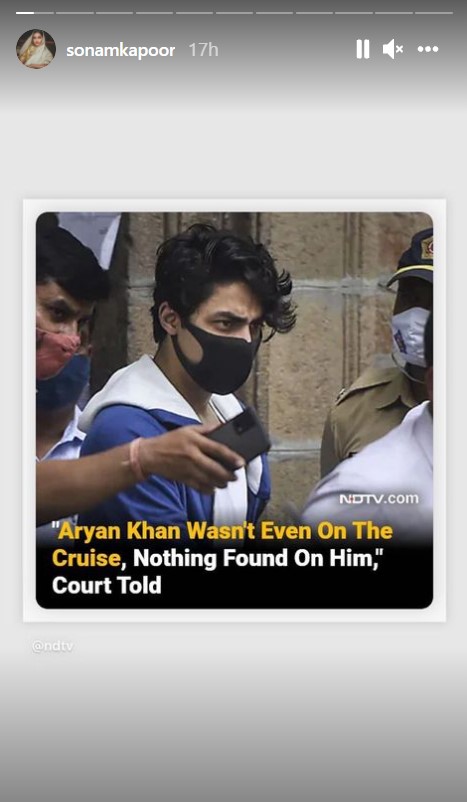 Although, she refrained from using words to showcase her support, fans were quick to jump to conclusion that the actor wants to inform her followers about the evidence procured in the legal matter.

Amidst this, Sonam Kapoor isn’t the only celebrity who has lended support to the Khan family. On Wednesday, during the bail plea hearing of Aryan, superstar Salman Khan visited Shah Rukh Khan’s house to be with the family. In the recent past, Pooja Bhatt, Hrithik Roshan, Hansal Mehta, Sussanne Khan were among the few others who took a stand for SRK amid the controversy.