Expressing concerns over Taliban's control on Afghanistan, members of the Hindi film industry - Kabir Khan, Sonu Sood, Swara Bhasker and Shekhar Kapur - said their thoughts and prayers are with the people of Afghanistan. 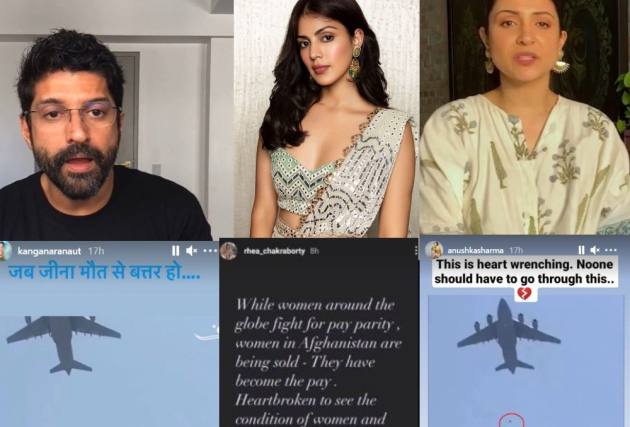 Bollywood celebrities, just like the rest of the world, have been shocked to see the pictures and videos of locals trying to flee from Afghanistan as hostile Taliban took control in the country. Actors Farhan Akhtar,  Anushka Sharma , Sonu Sood and Rhea Chakraborty along with many other celebs from Bollywood have expressed solidarity with the people of Afghanistan.

The only thing the powers of the world need to talking about right now is how to help innocent Afghans. Not in days and time to come. NOW.

Special prayer ðÂÂÂÂÂÂÂÂÂ for the people of Afghanistan. A nation wrecked and destroyed by colonial ambitions of foreign powers. #Afganistan

Filmmaker Kabir Khan, who had made several documentaries in post-Taliban Afghanistan and also set his feature directorial debut, ‘Kabul Express’, in the country, took to Instagram and posted latest pictures from the region.

Actor Swara Bhasker shared an artwork by Afghan Graffiti artist Shamsia Hassani, which depicted a hijab-clad girl, looking frightened, clutching onto a casio as a group of armed men watch over her.

Filmmakers Anurag Kashyap, Hansal Mehta and lyricist-writer Varun Grover also shared Afghan independent filmmaker Sahraa Karimi's August 13 open letter requesting the film communities of the world to be the voice of the people of Afghanistan in this hour of crisis.

The filmmaker, who was also the general director of Afghan Film, the state-owned film company, wrote that the entire country, including artistes and women, were in grave danger with the Taliban taking over.