In an interview to Outlook's Lachmi Deb Roy, Swara Bhasker says she likes that her show 'Rasbhari' depicts the hypocrisy of the society in dealing with the issue of sexuality.

Actor Swara Bhasker says the controversy around her latest web series Rasbhari seems as if she is being punished for "having a view". In an interview with Outlook’s Lachmi Deb Roy, the actor talks about the raging controversy surrounding Rasbhari and the backlash she is facing   for being outspoken. Excerpts:

What do you have to say about the response of people towards Rasbhari?

Just like Rasbhari, the show's main character who is the talk of the town, the show too has become the talk of the nation in real life. Some people who have watched the show love it and those who hate it, and are angry or offended, are also contributing to the buzz around web series. In some sense, they (the haters) are also doing us a service. It all worked out very well in the end, much like what happens to Rasbhari in the show. The show also became popular in just one day. It is really encouraging to see how much attention it received.

You are playing dual characters—Shanoo and Rasbhari. How difficult was it to switch from one role to the another?

Actually, one of the reasons why I wanted to be a part of this show was because I wanted the opportunity to play two characters. They are both so distinctive and it was challenging to differntiate between the two. Although the different costumes for the two characters helped, I made sure during preparation that I built both the characters to be very distinct from each other in every way--concentrating on difference in the attitudes, personalities, body languages, speech and the way they both carry themselves. Shanu is a very upright, straight forward and no-nonsense professional. She is beautiful, and she knows that she has a certain finesse, but she doesn’t play with her sexuality or uses it as a tool. In fact, when somebody tries to take advantage of that, she responds to it in a stern manner. 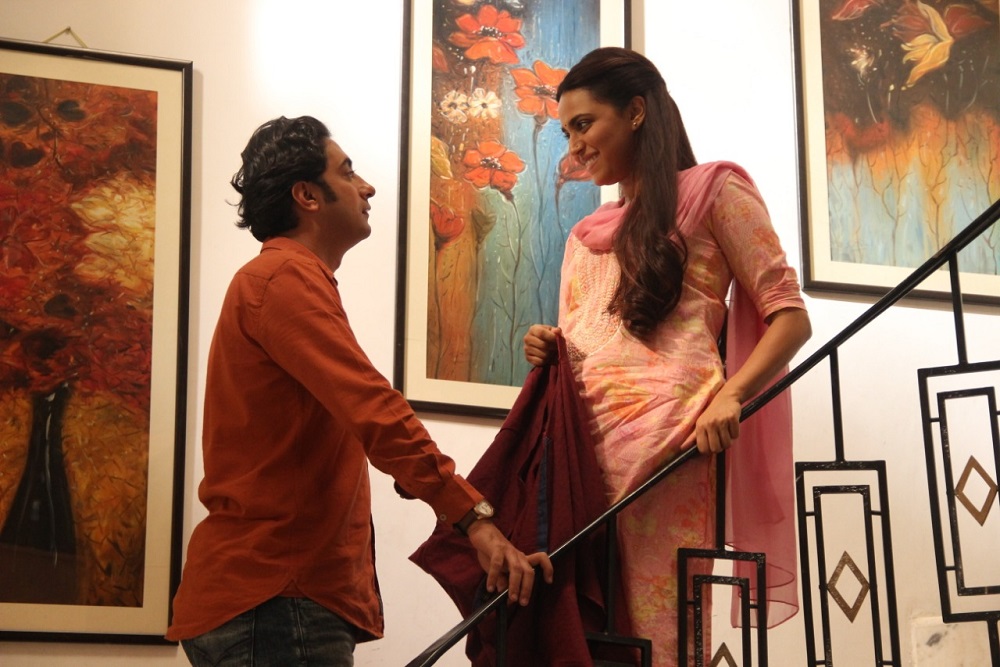 Rasbhari, on the other hand, is someone who is not just aware of her sexuality, but also wants others to be aware of it, and uses it as a tool. I made sure that in every scene, the motivation of both the characters was always clearly demarcated.

Who is Rasbhari? Is she a fantasy or a person who is suffering from a split personality disorder?

Rasbhari’s character is open to audience’s interpretation. She is a fantasy of the men of Meerut and a fear factor for the women of the town. She is also a subject of fantasy for her student, Nand, and perhaps a fantasy for the husband as well. Maybe all the rational explanations that we are trying to find around it, they are just ways to deal with the fact that Rasbhari’s character is actually a part of female sexuality which is repressed by the larger society that we live in. And there are a lot of these flashback points with that kind of connection, but what I like about the show is that you take what you get from it. The show acknowledges the hypocrisies and the double standards of our society. It shows that sexuality is often a complex thing. I think the question is open to the audience to interpret it in a way they want to. And if there is a season 2, we will see how it turns out.

Your favourite scene from the show…

Playing Rasbhari was tough because it was awkward to play a character like that. You also have to get over your own uneasiness and hesitation as a human being and sometimes get over your own morality as a person. I actually like the scene where she was with the jadu baba where she goes as Shanoo, but suddenly turns into Rasbhari.

I felt there is more to Rasbhari than just sex. She is a witty, funny, and mischievous woman. I really like the part where she knows all the mantras of Jadu ki Baba and she is not scared of him. In fact, the Jadu Baba is scared of her. She has a grand sense of self when she says things like ‘Hum Angrez O Se Na Dara’, ‘Hum Nawabon Se Na Dara’. She also refers to the 1857 Sepoy Mutiny, or the First War of Independence. It was also a tough scene for me because I remember I was very sick and in between the shots, I was getting a saline drip.

Why is it so difficult for people to accept a film that talks about female sexuality? And how is it a learning lesson for parents?

The show talks about parenting in India, which is deeply gendered. We give different sets of values to our girls and boys. We have a different standard for judging girls and boys, and I think the scene in which there is a debate on a little girl dancing is actually a great example of our society’s double standards. It shows how the mother is celebrating the fact that her son at a young age is so masculine. But at the same time, the adults put the burden of morality, ethics, and sexuality on a nine-year-old girl who is dancing and having fun. That whole scene comments on our parenting. It shows how it is the adults who sexualise children. And in some way, the critics also ended up doing the same.

How does internet trolling and negative rating affect you?

It’s exhausting and I have to keep clarifying and standing up for what I have done. My work is not judged by my performance; it is judged on several other things--my personal views, and sometimes it is like waging a one-woman battle. People who have watched Rasbhari have pointed out that the ratings are fake.

Do you make a conscious effort that a film or a show you choose is women-centric?

I don’t choose the show for a cause but I make sure that I don’t endorse something that I would not believe in. I make sure that the larger message sent by any role I portray is correct, even if I am playing a grey character. In the case of Rasbhari, it’s like you want to perform roles that are meaty; the roles that are most interesting to play are the grey ones, as opposed to simple black and white. There is no fun in a character that has no flaws, depth, or complexity. It’s always most interesting to play a character which is layered. When I am choosing a film or a show, I see my role, my place in the story, the story by itself, and the intention of the story and the people around it.

What made you agree to Rasbhari?

When Tanveer Bookwala offered the role and I heard the title, I was a little hesitant. I felt that it sounded like a blue film. But he insisted that I read the script, which I found to be really interesting. I liked three things about it. Firstly, the show deals with adolescent sexuality in a very frank manner, because that is something that we don’t see in Indian content. I like the fact that it showed that young girls are also fully interested in sexuality and are curious; their adolescent issues were represented in the show. I like the warmth of the show. I like that it depicts the hypocrisy of the society in dealing with the issue of sexuality. And I think all this trolling and hate have proved the point of the show. And I like the characters of Rasbhari and Shanu. Most importantly, I liked the team I was working with.

Has your outspokenness cost you professionally?

I think the whole pointless scandal and the unnecessary controversy around Rasbhari, along with the fake rating, answers this question. It was a direct attack on me professionally. It feels like you are punishing an actor for having a view.

Did your parents watch the show?

Yes. I made sure that they watch it separately. My father quite enjoyed it. And my mother had to say, “What’s the big deal, there is nothing in the show that people should talk about" (laughs).

Your projects in the pipeline…

I have a show called Flesh coming out on Eros Now. I have another show that has not been announced. And then there is the film Sheer Qorma.