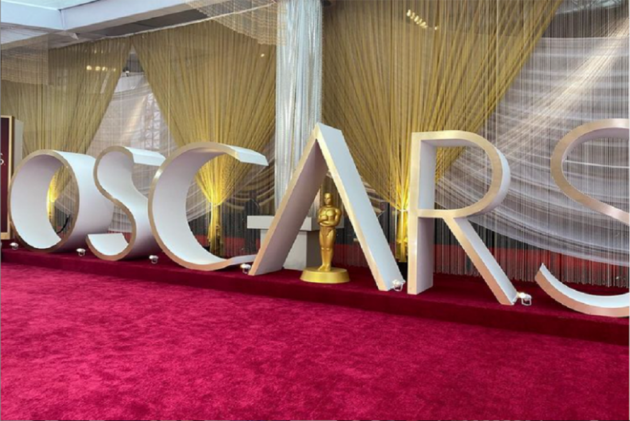 Celebrity couple actor-producer Priyanka Chopra Jonas and singer-actor Nick Jonas announced the nominations for the 93rd Academy Awards on Monday. The announcement was made from London during a livestream event via the Oscar's official YouTube page.

The award ceremony, which was postponed due to the pandemic, will take place on April 25.

David Fincher's black-and-white biographical drama "Mank" bagged the most Academy Awards nominations for its upcoming 93rd edition, scoring a perfect 10, also in categories such as best picture, actor for Gary Oldman and director.

The film was followed by "Minari", "Nomadland", "The Trial of the Chicago 7", "Judas and the Black Messiah", "Sound of Metal" and "The Father", which landed six nods each.

The best picture category also boasts of titles like "The Father", "Judas and the Black Messiah", "Nomadland", "Promising Young Woman", "Sound of Metal" and "The Trial of the Chicago 7".

Ahmed, who played the role of a drummer who begins to lose his hearing, charted history by becoming the first Muslim to be nominated in the leading actor category at the Academy Awards. This is a first Oscar nod for Boseman and Yeun.

This is also for the first time that two Asian actors have been nominated in the best actor category.

This is the first nomination for "The Crown" star Kirby and Grammy-nominated Day.

Nominations for "Minari" were reminiscent of the triumph that South Korean filmmaker Bong Joon Ho had with "Parasite" at the Oscars last year.

"Judas and the Black Messiah" co-stars Daniel Kaluuya and LaKeith Stanfield have both been nominated in the best supporting actor segment. Sasha Baron Cohen ("Borat 2"), Paul Raci ("The Sound of Metal") and Leslie Odom Jr ("One Night in Miami") are also part of the category.

The awards, given away by the members of the Academy of Motion Pictures and Sciences, also tried to level the playing field by acknowledging the work of a more people of colour and women.

For her road movie "Nomadland", Chloe Zhao became the first woman of Asian descent and sixth woman ever to be nominated in the best director category.

She is joined by Chung, Fennell ("Promising Young Woman"), David Fincher ("Mank), and Thomas Vinterberg for the Danish film "Another Round". For the first time, two women have been nominated in the best director category.

Mads Mikkelsen-starrer "Another Round" scored another nomination in the best international feature category alongside Hong Kong's "Better Days", Romania's "Collective", Tunisia's "The Man Who Sold His Skin" and "Quo Vadis, Aida?" from Bosnia and Herzegovina.

"The White Tiger", starring Chopra Jonas, "Borat: Subsequent Moviefilm", "The Father", "Nomadland", and "One Night in Miami" are the final nominees in the best adapted screenplay list.

"Feeling Through", "The Letter Room", "The Present", "Two Distant Strangers", and "White Eye" reached the final five in the segment.

However, India remains in the challenge with "My Octopus Teacher" nominated in the best documentary feature category. India's Swati Thiyagarajan has served as a production manager on the documentary by Pippa Ehrlich and James Reed.

The nominees for best original screenplay are: "Judas and the Black Messiah", "Minari", "Promising Young Woman", "Sound of Metal", and "Trial of the Chicago 7".

"Onward", "Over the Moon", "Shaun the Sheep Movie: Farmageddon", "Soul" and "Wolfwalkers" are nominated in the best animated feature film category.

The Academy Awards, will be held in-person from multiple locations, including in the Dolby Theatre, on April 25.