In his memoir 'Stories I Must Tell: The Emotional Journey of an Actor', Kabir Bedi calls Hollywood as a famous sign on a hill, a symbol of fantasy for millions, but was devastating for him and how it was Italy and India who resurrected him. 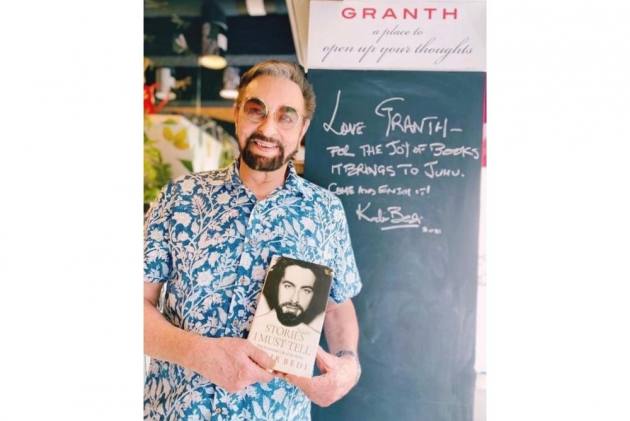 Veteran actor Kabir Bedi has opened up about his acting career in Hollywood and called it devastating despite doing several films and television series abroad.

In his memoir “Stories I Must Tell: The Emotional Journey of an Actor", the actor wrote, “What comes to mind when I think of Hollywood? It's a famous sign on a hill, a word for American films, a symbol of fantasy for millions. But it's a clever illusion."

Published by Westland, the book takes readers through the highs and lows of Bedi's professional and personal life, his relationships, including marriage and divorce, and his exciting days in film, television and theatre, in India, Europe and Hollywood.

Onion Is The Key Ingredient Of Most Of My Dishes: Celebrity Chef Kunal Kapur

He acted in films like 'Octopussy' with Roger Moore as James Bond, 'Ashanti' with Michael Caine, 'The Thief of Baghdad' with Roddy McDowall, and 'The Beast of War' directed by Kevin Reynolds. He also had lengthy roles in popular television series included 'The Bold and the Beautiful', 'One Life to Live' and 'General Hospital'.

In the book, Bedi bares his soul and tells the stories closest to his heart.

"They are emotional stories of turbulent times. Together, they are the story of my tumultuous journey as an actor," he says.

The book begins with Bedi mentioning how he left his hometown Delhi because of the British rock group, The Beatles. He interviewed this iconic rock band as a freelance reporter with All India Radio on July 7, 1966 - an "exclusive face-to-face, Beatle-by-Beatle interview, for 30 minutes" after much persuasion and almost a no from their manager Brian Epstein.

Bedi was 20 then and the interview went off well but soon his biggest disappointment came. When he asked the radio staffers for a copy of the interview, they couldn't find the tape. It turned out they had recorded other programmes over the taped interview.

Bedi also wrote about his friendship with Rajiv and Sanjay Gandhi.

"We became friends at 'Aunty Gauba's', my first school in Delhi. It was a small Montessori-style school in a colonial mansion near Connaught Circus, run by a kind but mercurial German lady, Elisabeth Gauba," he wrote.

He also said that Rajiv Gandhi's "astonishing rise to power" surprised him. "From being an airline pilot with no political ambitions, he suddenly became India's prime minister after his mother was assassinated by her Sikh bodyguards in 1984."

He then goes on to add: "In time, Rajiv emerged as the hope of a new generation. India was hungering for change."

He describes his relationship with Protima Bedi "as frankly as I can, with my own fallibilities" and also his time with Parveen Babi in vivid detail.

Of his several relationships, Bedi says he had gone from one emotionally draining woman to another, without a pause in between, leaving him no time for himself.

"People may think 'what a lucky guy' for having one beautiful woman after another. Only I know the price I paid for being an impulsively emotional man," he writes.

The book also has elaborate details about Bedi's connection with Buddhism. His mother became a fully ordained Buddhist nun in 1966.

He said he saw the aura of the Dalai Lama when he once met him in Dharamshala, even of his mother's guru, the Karmapa.

"They felt like enlightened beings. Buddhism's emphasis on compassion and meditation is unmatched by any. Vipassana gave me lifelong insights after I learned it as a monk in my childhood," he says.

During the discussion, Bedi spoke about his inner strength, dealing with setbacks and losses, and his experiences as a Buddhist monk. Daaji explained in detail about heartfulness meditation and its significance in life. He offered tips on yoga, and emphasised on the importance of mental and emotional well-being.

Speaking about yoga being touted as a cure all, Daaji said, "Yoga has been misunderstood as a cure for all. It is not a cure for all. When practiced only at a physical level, yoga cannot impact your soul. Asanas and Pranayamas only improve our physical health. They are a part of yoga, and not yoga itself. Our emotional, mental, and spiritual self, are more important than our physical self; and therefore, vital for holistic wellbeing.