Days Before Marriage, Deepika Padukone Wrote About Her Fight Against Depression, Anxiety

The actress stressed the need for people to come out and speak about mental illness. 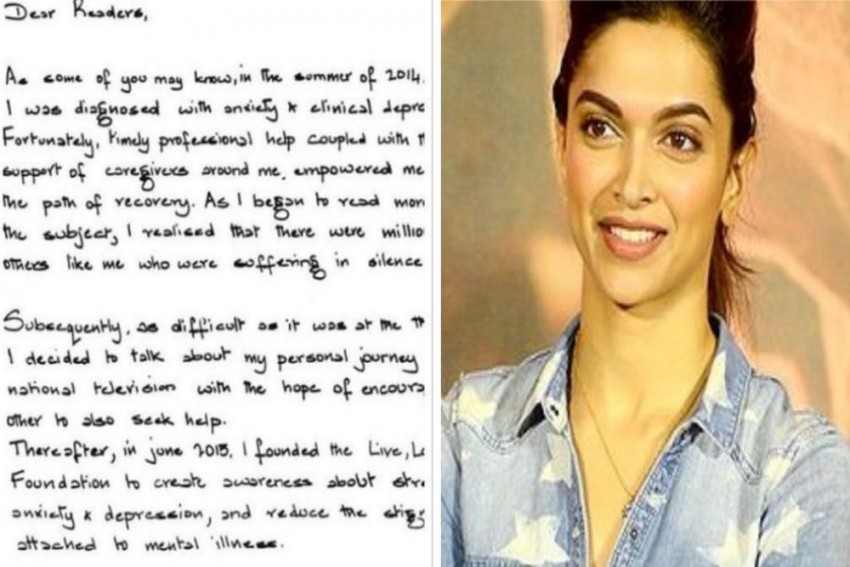 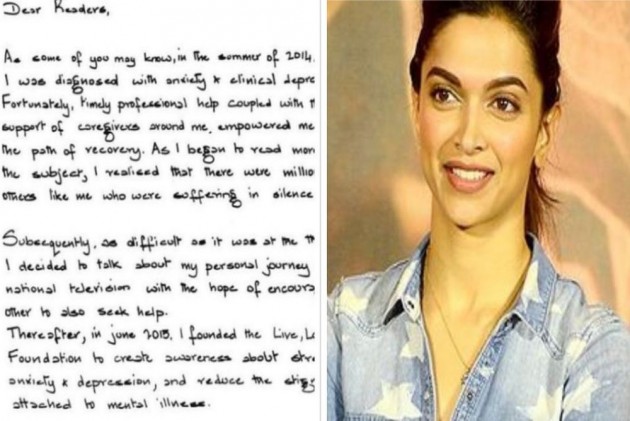 In 2015, Bollywood actress Deepika Padukone opened up about her depression and anxiety problem. The actress also encouraged people to seek help from others to fight against their problems.

Recently, in a post, Elle magazine (India) revealed that a few days before Deepika's wedding with Ranveer Singh, the actress penned down a letter addressing her struggle with anxiety and depression.

A few days before her wedding @deepikapadukone wrote a letter addressing her struggle with anxiety and depression, for our 22nd Anniversary Issue. By publicly talking about her own battles, she empowered many to reach out and seek help. Her letter is full of empathy and kindness, a reminder that (in the words of Stephen Fry) “it will be sunny one day”. Swipe through to read the full letter. . Link in bio. @tlllfoundation . ðÂÂÂÂÂÂ·: @errikosandreouphoto . #deepikapadukone #mentalhealthawareness #ELLEvate #BeMoreELLE #ELLEDecember #anniversaryissue

A few days before her wedding @deepikapadukone wrote a letter addressing her struggle with anxiety and depression, for @elleindia. By publicly talking about her own battles, she empowered many to reach out and seek help. For in the words of Stephen Fry “It will be sunny one day”. Read more: Link in our bio #ELLEvate #TogetherAgainstDepression #EndTheStigma #MentalHealthMatters

In the post, the magazine also shared a snap of the handwritten letter in which the 32-year-old actress had written, "As some of you know, in the summer of 2014, I was diagnosed with anxiety and clinical depression. Fortunately, timely professional help coupled with the support of caregivers around me, empowered me towards the path of recovery. As I began to read about the subject, I realised that there were millions like me, who were suffering in silence. Subsequently, as difficult as it was at the time, I decided to talk about my personal journey on national television, with the hope of encouraging others to also seek help. Thereafter in June 2015, I founded the Live, Love, Laugh Foundation to create awareness about stress, anxiety and depression and reduce the stigma attached to mental illness."

Here is the image of the handwritten letter by Deepika. 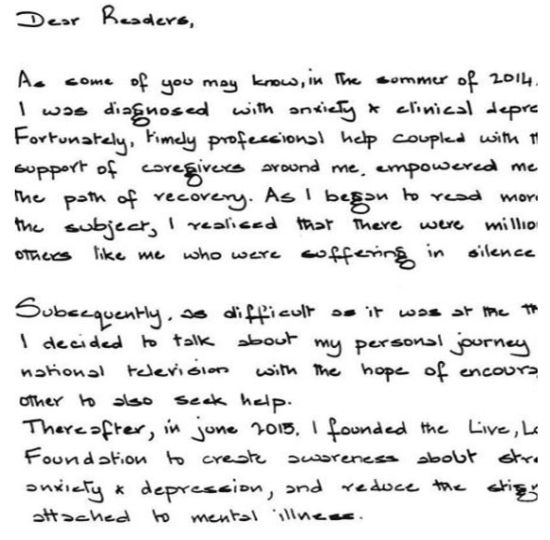 Earlier this year, speaking on 'Making Mental Wellness A Boardroom Priority' at the World Congress on Information Technology and Nasscom India Leadership Forum, Deepika said, "It's okay to have moments of weakness, okay to break down and okay to cry. It's okay if you don't look great all the time."

She stressed the need for people to come out and speak about mental illness. "You are not alone. One in three or five persons feels depression. It's going to be the next big epidemic to hit our country," added Deepika.

Taking to Instagram she had posted "Deepika, 32-year-old, depression survivor" with the hashtag #Not Ashamed.

The actress has been stressing on the issue of depression for a long time now, during an interview with the Hindustan Times in 2014, Deepika had stated that it was her mother Ujjala Padukone who had realised her problem of anxiety and depression and got in touch with a psychologist to get the root cause.

“In early 2014, while I was being appreciated for my work, one morning, I woke up feeling different. A day earlier, I had fainted due to exhaustion; it was all downhill from there. I felt a strange emptiness in my stomach. I thought it was stress, so I tried to distract myself by focusing on work, and surrounding myself with people, which helped for a while. But the nagging feeling didn’t go away. My breath was shallow, I suffered from lack of concentration and I broke down often," HT quoted Deepika as saying.