Bollywood’s dream merchants have rarely fought shy of making movies based on contemporary issues, and if the subject matter is controversial enough, more than one of them jump on the production bandwagon to make the most of it. Yet, the world’s biggest film industry, over the past three decades, has been flagrantly indifferent towards the large-scale exodus of the fear-stricken Kashmiri Pandits from the Valley.

It was January 19, 1990 when more than four lakh Kashmiri Pandits had to flee their motherland after facing death threats from the militant organisations seeking secession from India. They had to leave behind their homes and hearths and everything else they possessed before seeking shelter in faraway cities, from Jammu to New Delhi. Overnight, they all turned into the refugees with a distinct identity of their own but without a roof over their heads – in their own country.

Nothing has changed since then. Generations have passed the baton in the last 30 years, and many of them never set foot on the land where their ancestors lived in harmony with their neighbours until that fateful night. But deep down inside, most of them still have a flicker of hope in their hearts, thinking that, sooner or later, normalcy will return to their paradise on earth, and they will all go back to where they belong, without fear.

The forced exodus of such a large number of people at gunpoint has been an unprecedented instance, probably one of its kind in the world, when people from a particular religion had been driven out en masse from their birthplace under the barrel of the gun because of their religion.

Nonetheless, barring one or two small-budget movies, Bollywood has conveniently chosen to steer clear of making a film on such a big humanitarian tragedy. Whether it was the sensitivity of the subject matter or the latent apprehensions over its possible political fallout, Hindi film-makers apparently thought that making a movie on the migration of Kashmir Pandits was akin to playing with fire.

Things are beginning to change, or so it seems. Come February, Vidhu Vinod Chopra’s Shikara, based on this very subject, will hit the screens worldwide. The 67-year-old film-maker, who had shot into fame with a gritty Anil Kapoor-Madhuri Dixit starrer, Parinda (1989), is returning to direction 12 years after he made Eklavya: The Royal Guard (2007) with Amitabh Bachchan.

In between, he produced blockbusters such as Munna Bhai MBBS (2003), Lage Raho Munna Bhai (2006), 3 Idiots (2009) and PK (2014) but it was an emotional factor which brought him back behind the camera once again with a megaphone. He says he has made Shikara in memory of his late mother.

A native of Kashmir, Chopra’s family was among the hundreds of families which had to flee the Valley as militancy reared its ugly head in a big way at the outset of 1990s. His brother saved his life by escaping from there under the cover of darkness while his mother spent the rest of her life in Mumbai, until her death in 2007, with an unfulfilled wish to return home. “Shikara is not the story of my mother only,” says Chopra. “It is a story of all the mothers of Hindustan.”

According to Chopra, he has not made this movie for commercial returns, but he is hopeful that it will turn out to be a money-spinner with the blessings of his late mother. “It has taken me altogether 11 years to work on this movie,” he says. “In this period, I could have made three to four Munna Bhai movies or 3 Idiots with big stars such as Aamir Khan and Anushka Sharma, but I chose to make it with new actors to lend authenticity to it. Had I signed any big star, Shikara would have looked like any other typical Bollywood film.”

Shikara stars debutantes Sadiya and Adil Khan -- both from Kashmir -- in the lead, who play the couple in love caught in the vortex of hate in the Valley. But the film’s highlight is the participation of around 4,000-odd Kashmiri Pandit refugees as ‘actors’ in this film. It was not easy for them because they all had to re-enact the trauma which they had all endured in their real lives.

Chopra narrates an incident which took place while he was shooting a scene of a registration counter with Kashmiri Pandits, who had come from the refugee camps. During the shoot, he asked a woman who was in the queue to do a retake of the scene, which she politely refused. “I cannot do it for the third time,” she said. When Chopra reminded her that she had done it only once, she told him with moist eyes that she had done the same thing 30 years ago.

Chopra believes that Shikara would not have been possible without the support of people like her. There was another elder Kashmiri Pandit, he remembers, who would take part in the shoot enthusiastically but would refuse to take food. It was long after the shooting was over that Chopra came to know that he had passed away due to cancer. “He had problems in taking his meals but he did not tell it to anybody. It did not deter him from taking part in the shooting,” Chopra recalls. “He thought that a movie was being made on their story after all these years, which the whole world should see.”

Calling his film “a timeless love story in the worst of times”, Chopra says that Shikara may be based on the 30-year-old incidents but it stays relevant even today. “The film gives a message to unite not break,” he adds. “It tells a story of hope which has never been told. I have not shown the face of any militant in the film.”

Shikara may well lead other film-makers to chronicle the plight of Kashmiri Pandits onscreen. Director Vivek Agnihotri, for one, has already launched, The Kashmir Files, which is slated to release on Independence Day this year. Agnihotri, who had last year delivered a surprise hit, The Tashkent Files, based on the conspiracy theories surrounding the death of erstwhile prime minister Lal Bahadur Shastri, calls the migration of Kashmiri Pandits India’s holocaust. 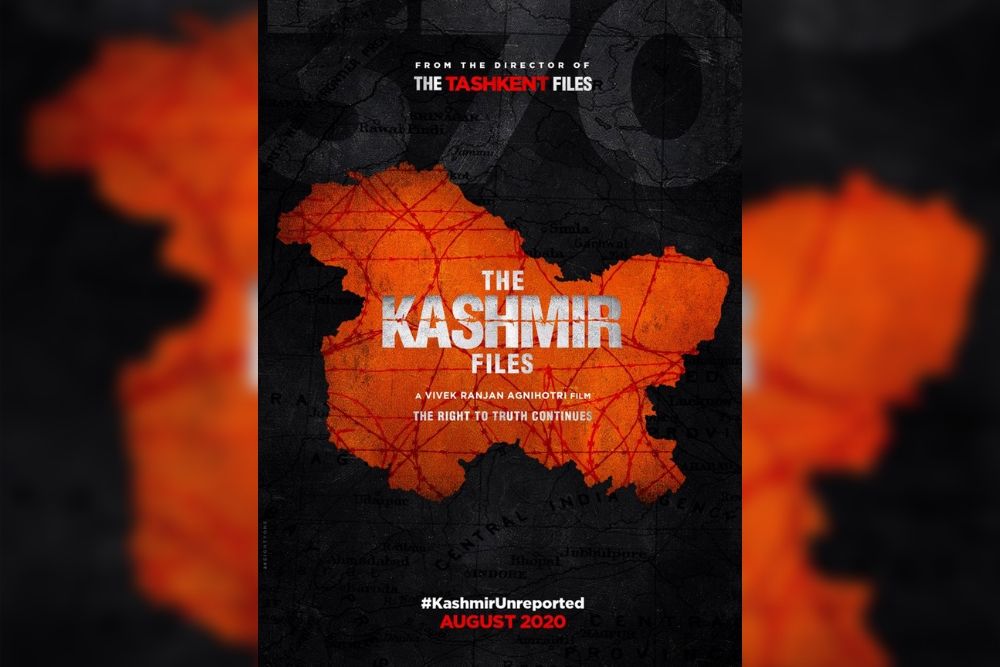 Bollywood observers believe that the film-makers are apparently feeling emboldened to tackle such a subject because of the changed political climate in the country. Activist-filmmaker Ashoke Pandit says that a producer can make a movie on any subject now. “There is no bar on them. Gone are the days when Aandhi (1975) was banned or the print of Kissa Kursi Ka (1977) was burnt during the Emergency,” he says. “Even the songs of Kishore Kumar were banned on All India Radio in that era.”

Pandit happens to be the first film-maker who had made a small-budget film, Sheen on Kashmiri Pandits in 2004. Ten years later, another film called 19 January was also made but none of them could make any impact within or outside the industry. Pandit says that being a Kashmiri Pandit himself, he had thought of making a movie which could bring the world’s biggest genocide before the world. “It is an assault which can never be forgotten,” he says about the migration. “There was no social media when I made the film and the mainstream media did not want to talk about it. Moreover, whatever happened in Kashmir valley did not suit the narrative of the Congress-Communist government of the time.”

Pandit is happy that film-makers like Chopra and Agnihotri are making movies of the plight of Kashmiri Pandits. Shikara made under a big banner is expected to put the issue under a spotlight once again after 30 years. However, it is not as though Bollywood has never used Kashmir as the backdrop of their films. From Mani Ratnam’s Roja (1992) to Vishal Bhardwaj’s Haider (2014), several Kashmir-related movies have been made over the years but they were all based on fictional plots, mostly on the rise of terrorism in the valley. Chopra himself made one such film, Mission Kashmir (2000), which starred Sanjay Dutt and Hrithik Roshan in pivotal roles.

All these movies had nothing to do with real life unlike Shikara, which is based on true events. Political observers believe that howsoever belated, Bollywood’s sudden interest in the migration of Kashmiri Pandits may not be directly linked to the Kashmir-linked decisions of the Narendra Modi government such as abrogation of Article 370 and Article 35A. At the same time, it can hardly be construed as mere coincidence in an industry which had always considered it a taboo in the past.  Incidentally, the migration of Kashmiri Pandits has been part of the Bharatiya Janata Party’s election manifesto in successive parliamentary polls over the years and the party has always reiterated its resolve to work for their return and rehabilitation in the Valley.

The jury is still out whether Bollywood has a political motive to highlight the issue at this juncture, but it remains a moot point as to whether it will continue to make movies on similar themes in future? Well, it all depends primarily on how Shikara, or for that matter, The Kashmir Files fare at the box office.

After all, it is commercial consideration, not political factor, which has always been the driving force of the film industry at the end of the day. Deepika Padukone’s recent release, Chhapaak may have sought to deliver a strong social message on the rampant acid attacks on the girls across the country but its failure to set the cash boxes ringing is unlikely to inspire any other film-maker to touch the subject even with a barge pole.