Karan Johar also questioned Shamita Shetty and asked her to explain what’s going on between her and Raqesh. He told Shamita that viewers are getting confused by their on-and-off fights and patch-ups. 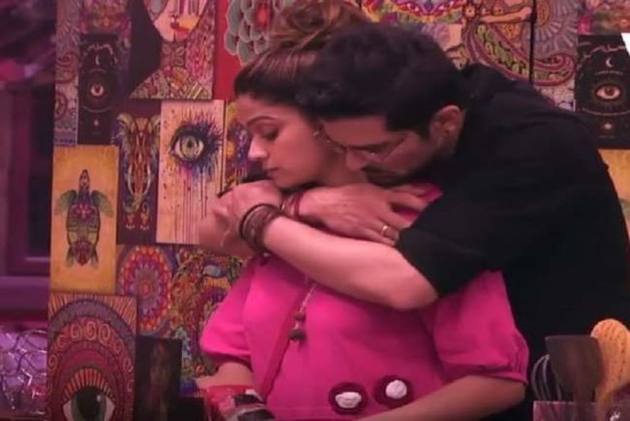 Bigg Boss OTT's Shamita Shetty and Raqesh Bapat are going through a rough phase for a week now. The duo is often seen arguing on matters related to loyalty. Lately, they got into a nasty fight where the ‘Zeher’ actress blasted on Raqesh for not supporting her during a fight with Divya Agarwal.

During the Sunday Ka Vaar episode, host Karan Johar came down heavily on Raqesh for making “a sexist" comment during a discussion in a nomination task. During their discussion, Raqesh said he wanted to give Pratik a disadvantage as he felt “men are stronger than women in terms of strength." His remark irked Moose and Pratik who blasted Raqesh for being “sexist." Karan asked Raqesh for an explanation for that remark.

In his defence, Raqesh said that he was only talking about men’s physical strength and that Pratik was somewhere physically stronger than the women in the house.

Hearing this, the host said, “I’m sorry to say that was just sexist. I have to call it out. It was sexist. Let me tell you dear, if push comes to shove and I hope it never does Shamita can kick your a** and so do Neha and Divya."

He added, “We’re living in a woke world. We don’t say things like this, not under my surveillance. Now that it’s being discussed, I want you to reflect on it."

“I don’t want to be a part of the cancel culture. I had a lot of men tell me, “Oh, you are not man enough!" And, I want to tell you that these things are hurtful. But I don’t want to cancel those people who say it. I want to make you (Raqesh) understand through this show that this is wrong. You accept it and understand it and move on,” Karan said.

That’s not all, Karan also questioned Shamita Shetty and asked her to explain what’s going on between her and Raqesh. He told Shamita that viewers are getting confused by their on-and-off fights and patch-ups.

Both Shamita and Raqesh have admitted to having feelings for each other – While Shamita has expressed that she is quite serious about him, Raqesh was heard telling Neha Bhasin that he is not ready to get into any relationship right now as he just had a divorce.

“First of all, what I’m doing here in terms of (showing) my feelings towards him, I’m literally pushing myself out of my comfort zone because doing all this in front of the cameras is alien to me. But I genuinely like him. Maybe we were forced to be with each other in the beginning because of the connection happened. He has also said a lot of things to me that ‘our souls connected’ and ‘you stood by me like a rock.’ I thought it was mutual but then suddenly he changed in the last one week. I don’t know if it’s because people called him spineless or henpecked. I feel he’s become very different with me and sometimes to an extent of being very arrogant and insensitive," Shamita told Karan.

Karan went on to ask Shamita if Raqesh broke her heart to which she said, “Yes, but the problem is that he doesn’t understand that he broke my heart and he is the only one who can mend it. He feels that if he maintains a distance from me I will be better but that for me, is an escapist attitude."