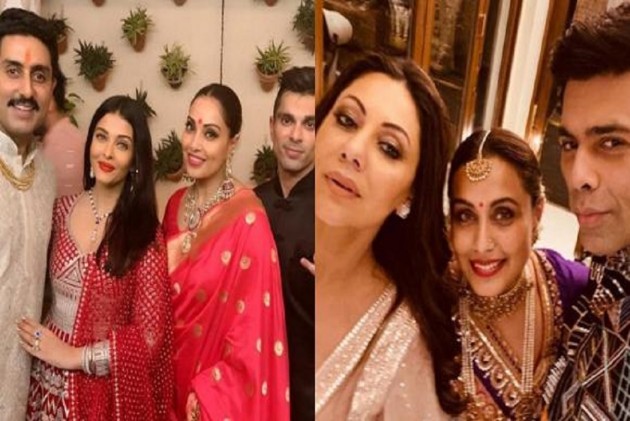 After the paparazzi photos, the stars shared a couple of inside photos from the party and gave us a glimpse of Bachchan family’s Diwali bash. Bipasha and Karan shared photos from inside. In one of the photos, Abhishek, Aishwarya, Bipasha and Karan posed for a photo while in another, Rani Mukerji posed with Karan Johar and Gauri Khan for a selfie. Karan Johar shared selfies with Rani on Instagram. In a photo shared by Abu Jani and Sandeep Khosla, Shweta Bachchan Nanda posed with Jaya Bachchan, Navya Naveli and Agastya Nanda.

Clad in stunning traditional wear, Navya looked gorgeous while Agastya also opted for ethnic wear. Jaya Bachchan was seen clad in a white saree while Shweta also opted for red saree. Aishwarya was seen dressed in red while Amitabh Bachchan and Abhishek were twinning on an off-white Kurta Pajama. While the star-studded bash went on till the wee hours of the night, many of the stars present are yet to share photos on social media. After 2 years, Jalsa hosted one of the biggest star-studded Diwali of Bollywood.