So why did the FM seem to be echoing the old refrain of a 1980s' socialist tune? Unfortunately, two of India's greatest reformers have been saddled with heavy political baggage. Updates 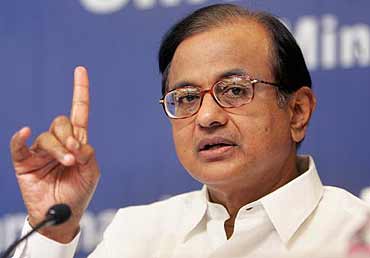 It was probably the worst time to present a budget. A day earlier, the ruling Congress party suffered thumping electoral defeats in two states to add to its worries on account of the Q Factor, and only a few were optimistic about its performance in the next round of state polls. The night before, global markets had tanked and the Sensex opened 350 points down. For the past few weeks, inflation had raised its ugly head forcing the government to initiate steps to curb down prices. In December last year, P. Chidambaram had fractured his toe and wasn't sure if he would be able to stand in Parliament for over 100 minutes to deliver his speech.

Going by the immediate reactions, it was probably the worst budget in recent history. India Inc dubbed it an average one, and CEOs gave it a rating of 5 on 10. An analyst said it would have been worse if it had been presented a couple of weeks later. Another claimed that the only positive aspect about it was that it could have been worse. Bharti's Sunil Mittal felt that the FM had done nothing for the corporate sector. Even Chidambaram said hours after his speech that there were no negatives in his budget for manufacturing, forgetting to mention of course that there were no positives either.

Of the 103-minutes speech, a third was on agriculture, education and health. Another third on infrastructure, employment and inflation. The tax-related proposals took a mere 30 minutes -- which included concessions for umbrellas and pet foods. The only reforms the FM announced were to cut peak import duty to 10 per cent, use a minute portion -- about $5-6 billion -- of the bulging foreign exchange reserves to fund infrastructure, and allow short-selling by foreign institutional investors. That's why one commentator said the speech had overtones of old-style socialism. For those, who have heard budget speeches for decades, it sounded like one from the 1980s; and after all almost all FMs of that era taxed cigarettes as well.

Why did the FM do what he did? Why did he present such an insipid budget, especially when the economy is doing well, the general elections are over two years' away, and he had the opportunity to take some hard decisions? For those who can read between the lines, or read PC's lips, the budget gave a clear signal that the Congress, together with its allies, is gearing up for the forthcoming state elections in Uttar Pradesh and then in Gujarat later in the year. Therefore, the FM had his eyes turned towards 10, Janpath, while formulating the various budgetary proposals and allocations.

Given Sonia Gandhi's interest in the lives and affairs of the aam aadmi, there was no escape from doling out sops to the small and marginal farmers, announcing a safety net for workers in the unorganised sector, giving a few incentives to the small traders and service providers, and making an attempt to boost production and productivity of the farm sector. To be fair to PC, it must be noted that he has realised that agriculture is the real laggard of the economy, and India can't even dream about double-digit GDP growth without sustained growth rates in this area. During the 10th Plan period, agriculture witnessed an average growth of 2.3 per cent compared to a target of 4 per cent.

The FM had the luxury of not doing anything for India Inc, since it's on a roll and growing at a rollicking pace. As one CEO commented that the Chidambaram gave a thumbs up to the industry and urged it to keep it up, without announcing anything extra for it. Thanks to the expected 9.2 per cent growth this fiscal, the FM also had enough money to give out for welfare schemes like the National Rural Employment Guarantee Scheme (NREGS). In fact, it isn't surprising that without doing anything, the FM expects to witness an over 17 per cent growth in gross tax revenues in 2007-08, compared to 2006-07. He hopes that customs and income tax revenues will grow by over 20 per cent each, and service tax by over 30 per cent.

Inflation was always going to be an integral part of this year's budget. And that's one area where we see echoes from the socialist past. The government has virtually forced cement manufacturers to lower prices by having a dual excise duty structure; the FM contends it's meant to incentivise companies that sell at lower prices. Dual tax structure has invariably led to misuse and leakages-- as it did with Public Distribution Scheme (PDS)-- and the focus in the era of reforms should be to simplify the tax structure, rather than make it more complicated. The paragraph on the ban on futures trading in wheat and rice was a political bow to Congress leaders, who have been clamouring for a ban on all futures trading in food commodities.

Chidambaram tried to enthuse the stockmarkets on a day when a crash was inevitable due to the biggest ever single-day crash on Wall Street since 9/11 following the volatility in Chinese markets a day before. He allowed individuals to invest in overseas markets through mutual funds, gave minor sops to FIIs, and talked about self regulation under the aegis of SEBI. But the Sensex tanked by over 550 points, thanks to proposals such as the hike in dividends distribution tax, minimum tax on software firms, and fringe benefit tax on ESOPs. The logic was that the dividend tax at the giver stage was lower than minimum tax that an individual would have to pay on that income, the minimum tax effect will be minimal, and ESOPs are fringe benefits to employees and should be taxed.

But what has really irked economists and corporate leaders is that despite saying things to the contrary in his earlier budgets, Chidambaram has indicated that the only way to solve a problem is to throw more money at it. For years, the FM has said that allocations for the social sectors and welfare schemes need to be spent more efficiently and the government has to improve the delivery mechanisms to ensure that the money reaches the right people. He said it again this time too. However, there has been little indication that this has indeed happened in the past 33 months.

What was missing in the budget was a vision or even a long-term economic strategy. Unfortunately, two of India's greatest reformers, who always maintained that there's an economic consensus in the country on reforms that can't be impacted by politics, have been saddled with heavy political baggage -- and perhaps they had no choice but to let politics triumph over economics.

What Can IT Industry Do For India?