The late Malcolm Muggeridge once noted the difficulty facing satirists: How do you poke fun at reality when reality itself is bizarre? When Henry Kissinger gets the Nobel Peace prize, satire has little room for play. 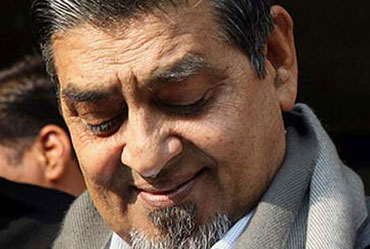 That television channels frequently set the agenda has been conclusively proved by the Jarnail Singh shoe-throwing incident. The story itself was a TV channel’s dream. A press conference addressed by a serious minister; a testy Sikh journalist exceeding his brief by using the forum to make a personal statement rather than just ask a question; A single trainer, in need of cleaning, chucked from ten yards underarm; appalling aim; the weapon misses target by miles; the hack escorted out with the minister saying, "gently, gently". They say the camera does not lie but like Goebbels observed, if you repeat something often enough, truth can be distorted.

Repetition of an image is an old news channel trick. I didn’t catch the regional channels, but the English ones had a field day playing the clip over and over again. Mr Chidambaram’s response was exemplary in its sobriety; the clip became progressively boring.

The comic aspect of the shoe-throwing seemed to have escaped the assailant, the victim, the audience and the commentariat. Appearing on Arnab Goswami’s Newshour, I was the lone discussant to caution against going over the top, to suggest that all of us needed to drink a glass of cold water and calm down. It was a cry in the wilderness. I jokingly suggested that journos might in future have to go to press briefings barefoot! Even that did not produce a titter.

The next morning I read that Ms Mayawati was indeed contemplating such a measure in the interest of safety and security. The late Malcolm Muggeridge once noted the difficulty facing satirists: How do you poke fun at reality when reality itself is bizarre? When Henry Kissinger gets the Nobel Peace prize, satire has little room for play. Present day politics are a nightmare for professional humorists.

As I write, Jagdish Tytler has finally pulled out of the Lok Sabha race in disgrace. But scribe Jarnail has become a national hero. Good luck to him and let us hope the next prankster has better aim.

Reebok is laughing all the way to the bank. I hope the MNC replaces Jarnail’s lost shoe!