Edhi, A Sufi Saint At The Ambulance Wheel

‘I am a man of emergencies, I need to be on the move, to be where the suffering is,’ Edhi told the BBC after the US immigration confiscated his passport in 2008. 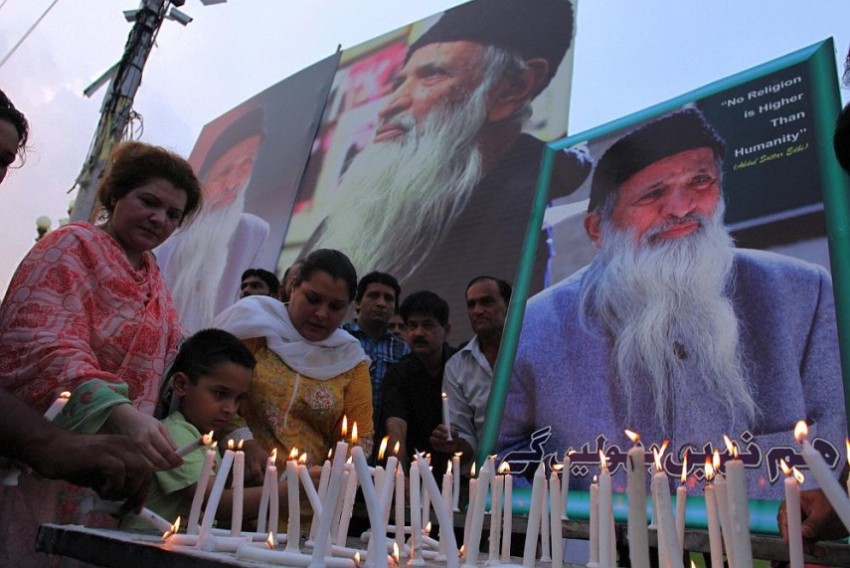 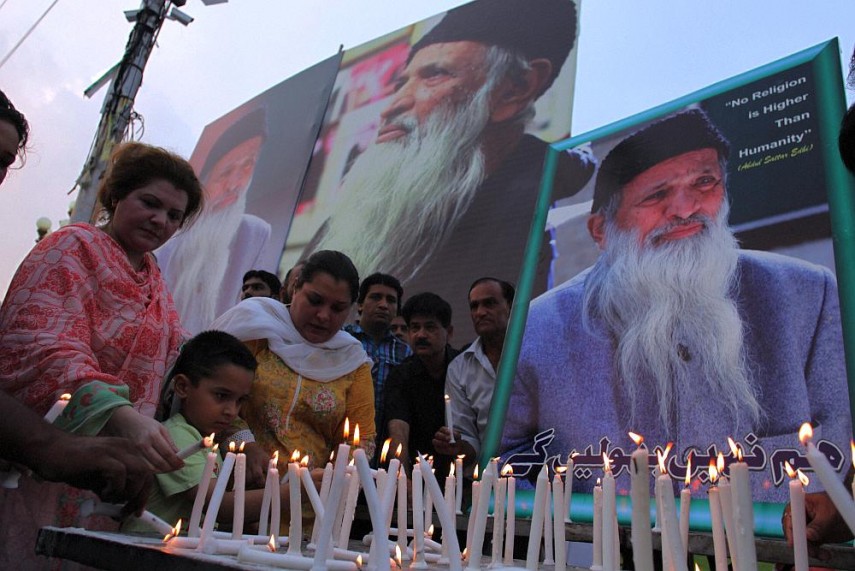 Universally renowned and revered humanitarian and philanthropist Abdul Sattar Edhi, known as “Angel of Mercy” and Pakistan’s “Father Teresa”, died in Karachi on July 8. He was 88.

In a country which is increasingly in turmoil, where nothing seems to be in order, where despair and darkness pervade almost every walk of life, Edhi was like a breath of fresh air, a beacon-light of hope to millions of people craving for peace and tranquility.

“Mr. Edhi’s interpretation of Islam as humanitarian, instead of militant, is the fastest, simplest and perhaps only way presently available for promoting peace between the Muslims of the world and the peoples of the West,” emphasised Pakistan’s widely read and respected newspaper Dawn.

“Social welfare was my vocation, I had to free it,” he stated in his autobiography, A Mirror to the Blind. True to his words, Edhi lived like a Sufi saint and dedicated his entire life to the service of humanity in a country rife with corruption, sectarian hatred and violence.

Humanitarianism was a mission for Edhi, who hardly took a single holiday in his lifetime and ensured that he was always at hand for an emergency call, day or night. Although offered generously, he never accepted financial assistance from any government in the world or donor agencies like United Nations, United States Agency for International Development and the World Bank.

Of course, Edhi did need money to meet his operating costs. So he sought private donations and was given magnanimously. He also collected funds from the middle-class people of Pakistan – the ascetic would be seen sitting cross-legged with the donors dropping currency notes in or near his lap. Edhi made them shareholders in a social welfare industry he created. In 1951, he established Edhi Foundation, which is now an acclaimed nonprofit. Starting from a single clinic in Karachi, it has blossomed into a gigantic charitable empire. It runs over 300 welfare centres in rural and urban Pakistan.

They include hospitals, orphanages, morgues, food kitchens, shelters for the abandoned children and women, rehabilitation centres for drug-addicts, clinics for mentally challenged individuals, and legal aid and counsel offices. Edhi also ensured that his charity provided technical education to the disadvantaged, spiritual awareness to street children, consultations on family planning and maternity services, as well as financial and medical support to the handicapped and prisoners.

Over the years Edhi Foundation has rescued and rehabilitated thousands of abandoned infants and orphans in a country where living a peaceful and trouble-free daily life is one constant struggle even for those who have homes and families. Edhi Foundation has conducted relief operations in other parts of the world, too, including Africa, the Middle East, the Caucasus region, eastern Europe and even the United states, when it helped provide aid following Hurricane Katrina.

It has a fleet of ambulance helicopters as well as nearly 2,000 emergency mini-vans. The ambulance network operates across the length and breadth of Pakistan. All you have to do is dial 115, anywhere in Pakistan, and you are instantly connected to the Edhi Foundation’s brilliant emergency service.

During the last stage of his life, when he was critically ill, his wife and children successfully ran the organisation’s daily operations. Of course, earlier, when he was hale and hearty, he remained involved hands-on in Edhi Foundation. Among other things, including personally driving an ambulance across Karachi to help anyone in need, he would assist with ritual bathing of the corpses of the deceased poor. Last month, the philanthropist had declined an offer by the former President Asif Ali Zardari for treatment abroad, preferring instead to get it in a government hospital in Pakistan.

Like Quaid-i-Azam Muhammad Ali Jinnah, cricketing Mohammad brothers and many other famous Pakistanis, Abdul Sattar Edhi was also born in Gujarat – in Bantva, a small town near Junagadh and Gir forest, on January 1, 1928. The Edhis were traders and devout Muslims and it was no surprise that he, too, grew into an extremely religious man. It was his mother, Ghurba Edhi, who inculcated spiritualism and social service in him from a very early age, giving him 1 paisa as pocket money and another to give to a beggar.

He was barely 10 when she became paralysed and suffered from mental health issues. The genesis of Edhi’s social work lay in his personal experiences during his mother’s illness and treatment. She never fully recovered and died, leaving her doting son, who was only 19, “completely shattered”.

Edhi was deeply affected by what he saw and experienced during that particular phase in his life. Though painful, it turned out to be a decisive turning point towards philanthropy. Circumstances may have prevented him from finishing school (he did not study beyond Standard III), but world suffering became his biggest tutor and source of wisdom. Edhi migrated to the newly-formed Pakistan after Partition. He made a living at first as a peddler and later by working as a commission agent selling cloth at the Karachi wholesale market. The foundation of his charity work was laid a few years later, when he started a free dispensary with the support of some community members.

“I saw people lying on the pavement. The flu had spread across Karachi and there was nobody to treat them. So I set up benches and got medical students to volunteer. I was penniless and begged for donations on the street. And people gave. I bought this 8x8 room to start my work,” he said in an interview. It was at this dispensary that he met the nurse Bilquis Bano. They married in 1965 and were blessed with two sons and two daughters. Like her husband, she was attracted to social service like a moth to a flame. She ran the free maternity homes and organised adoption of abandoned and out-of-wedlock babies across Pakistan.

Simplicity and humility were two of Edhi’s many endearing qualities. Despite millions of rupees that passed through his hands, he lived a very simple, modest life with his family in a two-room apartment adjacent to the headquarters of his foundation. He shunned publicity, fearing that it might make him “haughty”. “I want to request the people not to invite me to social gatherings and inaugural ceremonies. This only wastes my time, which is wholly devoted to the wellbeing of our people,” he told a journalist in 1991.

Edhi, who sported a flowing beard and dressed strictly in Pakistani shalwar-kameez and a sheepskin skull-cap, was respectfully addressed as Maulana Edhi. He had no qualms about serving Pakistan’s religious minorities. But even a man of Edhi’s reputation and standing could not steer himself clear of controversies. He was branded as a “communist” by his detractors for his liberal views and his welfare activities. And he had also to face problems on several occasions when travelling abroad.

In the early 1980s, he was arrested by Israeli troops while entering Lebanon to deliver aid to Palestinian refugees whose camps were attacked by the Israeli jets. He was freed only after his credentials were verified. In 2006, he was detained for 16 hours at an airport in Toronto, Canada, and had to miss his flight. In 2007, he was again detained for eight hours at an airport in New York. On both occasions, his travel documents were not seized and he was allowed to proceed after interrogation.

On January 9, 2008, the United States immigration officials interrogated him for over eight hours, at John F. Kennedy Airport, New York, and confiscated his passport and other documents. “I am a man of emergencies, I need to be on the move, to be where the suffering is, but here I have been sitting idle for 20 days because I cannot travel without my passport,” he told the BBC then. “The only explanation I can think of is my beard and my dress,” he said when asked why he had been stopped so often.

Edhi received numerous national and international awards and honours – Ramon Magsaysay Award, Lenin Peace Prize, International Balzan Prize, Gandhi Peace Award, et al. His name was nominated for the Nobel Peace Prize by Pakistan’s teenaged Nobel laureate Malala Yousafzai. “As a Nobel Peace Prize winner, I hold the right to nominate people for the prize and I have nominated Abdul Sattar Edhi,” said Malala. “Of course, even the most coveted prize cannot be a befitting tribute to Edhi’s services to humanity.”