For the state shall provide for all. That seems to be the populist message from DMK's election manifesto. Has Dr. Kalaingar lost it? Or has he lost all hope to win these elections? Updates 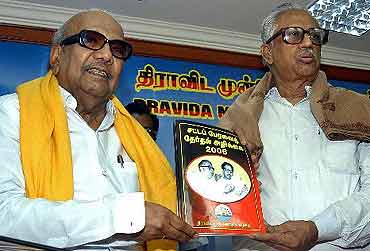 'A single sentence will suffice for modern man: he fornicated and read the papers'

In an age when idiot box psephologists and sundry political pundits cry themselves hoarse about the primacy of the BSP factor (Bijili, Sadak, Paani, or Electricity, Roads, Water ) in any election in New India, the DMK, in its manifesto for the forthcoming elections in Tamilnadu, has done remarkably well to balance the modern with the medieval.

Going by the three promises which DMK chief M. Karunanidhi chose to highlight while releasing the manifesto today, it is clear that the Camus sentence has undergone some changes, and the message for the state's electorate is clear: eat more, spend more time watching TV (preferably Sun TV) and, procreate. Everything is on the house. Dr. Kalaingar, it seems, has had some consultations with the Swedish Social Democrats (who spend more than 50 per cent of the country's GDP on welfare sops) before setting out the party's agenda for the state.

In this populist slugfest, chief minister J. Jayalalithaa had announced a scheme to provide free bicycles to students in the state, and her cash dole of Rs 2,000 for each flood-affected family across the state seems to have ensured more votes. Not to be outdone, the DMK promises to install a colour television in every home and give a monthly allowance of Rs 1000 for six months to pregnant women, besides providing superior quality rice at Rs 2 per kilogram through the public distribution system. While the Rs 2 rice scheme is a time tested vote harvester successfully employed by both NT Rama Rao and later his son-in-law N. Chandrababu Naidu, the first two promises have disaster and deceit written all over.

By offering a pregnancy allowance, Karunanidhi has made a mockery of family planning campaigns on which the country has invested significant energy and resources. If the DMK comes to power, the septuagenarian leader could as well disband TN government's various family planning departments. If he does indeed care so much, could he not, for example, have provided for medicare or incentives for the first two pregnancies? Although one can dismiss the proposal as an election-time bout of lunacy, the plans to provide free colour TVs deserve greater attention. While the rest of the world looks at literacy and sex ratios, tele-density, electricity, hospitals and doctors per 1000 people as development indices, in DMK's lexicon television seems synonymous with development. The only people who bother about television penetration so much are media planners at advertising agencies, and television makers themselves. DMK is neither. So why the fuss?

Karl Marx termed religion as the opium of people. Karunanidhi has realised that television is the opium for Tamils. There are nearly a dozen Tamil satellite channels for a state's population of just over six crore and the Sun TV network run by the Karunanidhi family with a bouquet of five channels. In the TRP ratings for Tamil programmes, Sun TV shows occupy almost all the top ten spots. Recently, media analysts have pegged Sun TV's valuations at a whopping Rs 3000 crore. You can picture the channel's vice-like grip over the popular culture and imagination of the state when Vaiko, an erstwhile alliance partner of DMK, who has now joined hands with Jayalalithaa, cited his "blackout" on Sun News as one of the primary reasons for the fallout.

Karunanidhi's detractors allege that he is more interested in expanding the family's media business interests. His "vision" of increasing the television density would most definitely mean greater revenues, not to speak of unmatched political and advertising clout for the Sun Network. Just a back of the envelope calculation shows that Karunanidhi's latest freebie scheme would cost the exchequer Rs 5000 crore. The average penetration of CTVs in India is around 27 per cent. In the case of TN, it is higher at 30 per cent. Considering that there are 1.2 crore households in the state, nearly 70 per cent or 8.5 million (10 million are sold in the whole of India annually) of them still don't own a box. Even if you put the average cost of a CTV at Rs 6,000, TN's next finance minister could be looking at setting aside Rs 5100 crore.

Chennai is perhaps the only metropolis in 21st century India which relies on sub-Saharan hand-pumps for the supply of drinking water, and it will continue to be that way for the foreseeable future. But what the heck, the state will have more idiot boxes than the rest of India. Perhaps those who have no houses or access to electricity would be forgiven for hoping that they would get these basic necessities as well, so that they could use these TV sets? Or has the canny old politician figured out that it would never come to that, given how the electoral odds are weighted against him?